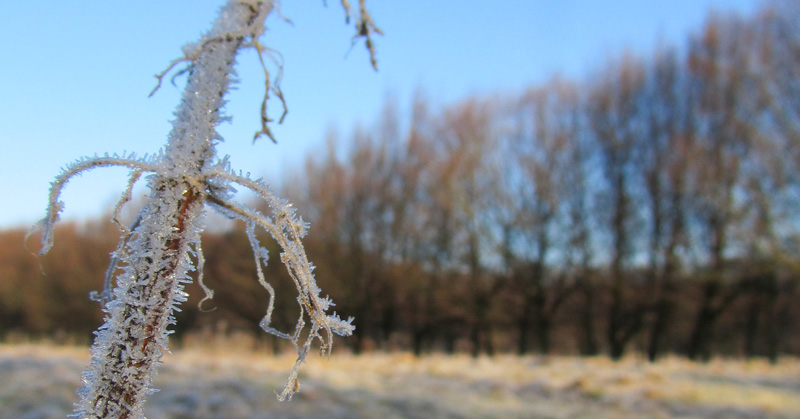 Mark and I headed to the "hawfinch hedge" just west of Morpeth this morning... and it was a cold one at that, saved by a beautiful blue, cloudless sky. A two hour vigil was suitably hawfinch-less, though marsh tit was appreciated.

We failed to locate any of the white-fronted geese at Woodhorn, though chips at Newbiggin were consumed while watching a couple of Mediterranean gull scavenge around the car park.

Blyth was the next port of call (pah!), and it was thanks to Brian that we connected with a distant red-necked grebe at the river mouth. Our journey back to the car was interrupted by six snow bunting, that photographically saved the day... 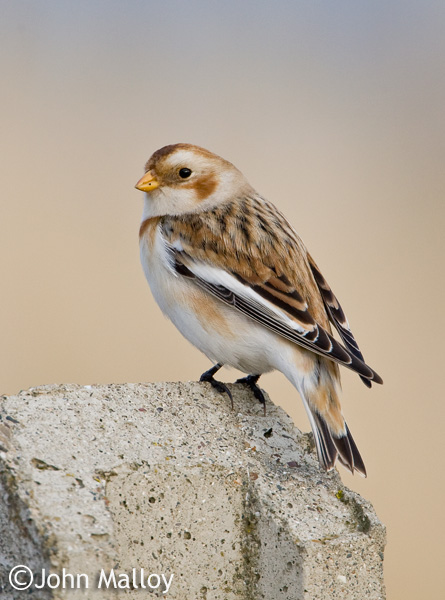 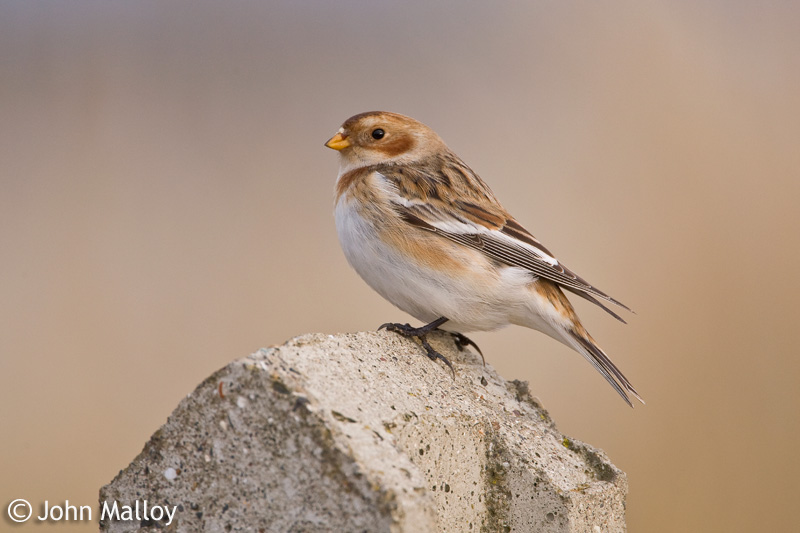 The final stop of the outing was the Burton House pub in Cramlington, where an apple-less apple tree failed to retain any of the waxwing that had been enjoyed a few days ago. No sign of the blackcap either!

A later report on the pager mentioned that there were 16 waxwing at the Shaw garden centre in Cramlington ~ while approx 40 were noted by Birdingsometimes Senior in Alexandra Park yesterday... probably the flock on the move...
Posted by John Malloy at 20:47 2 comments:

First musical interlude of 2011 ~ The Cult at Newcastles' O2 Academy... missed them first time round, so was pleased to get a show now. This was the first outing with a new digital compact - Canon SX120IS, with a 14X optical zoom and versatility of manual operation... I'm pleased with the results given the venues "ROCK" lighting (ie very dark!!!) 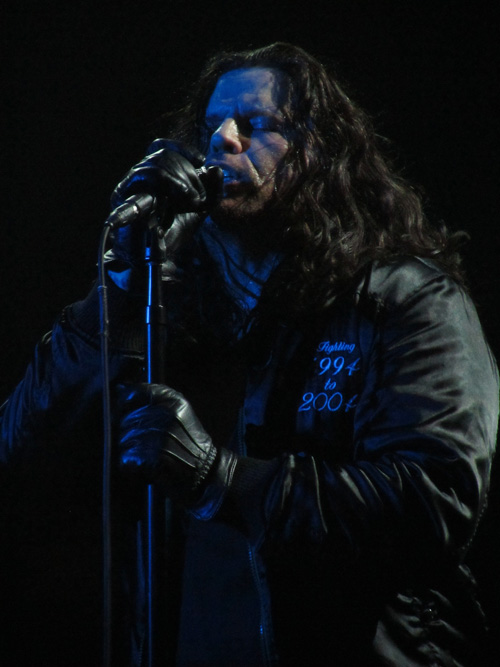 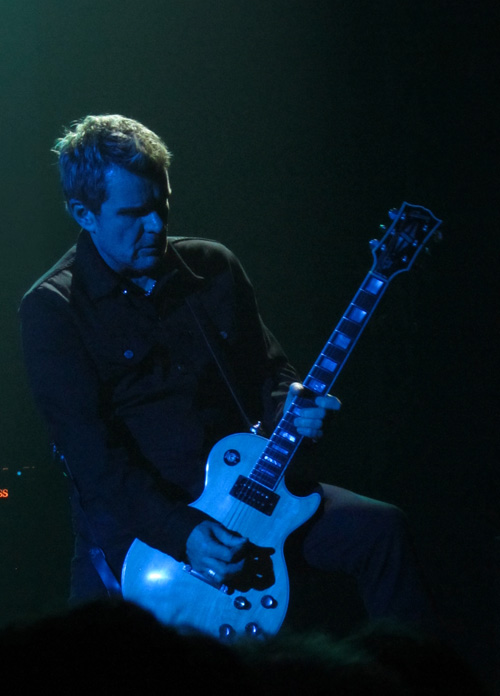 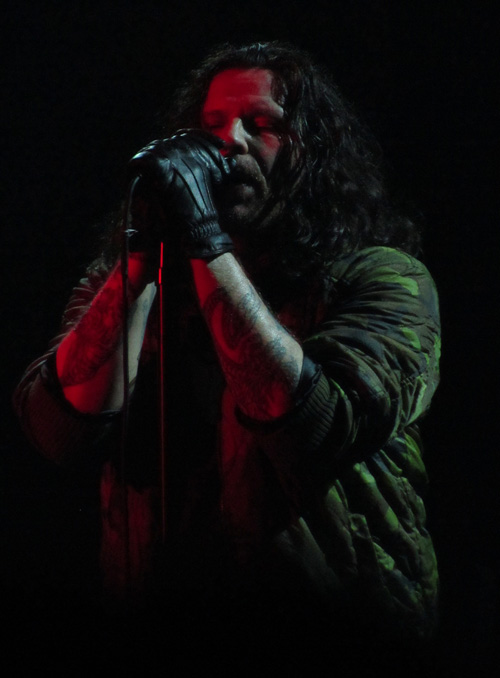 Email ThisBlogThis!Share to TwitterShare to FacebookShare to Pinterest
Labels: Newcastle, O2, The Cult 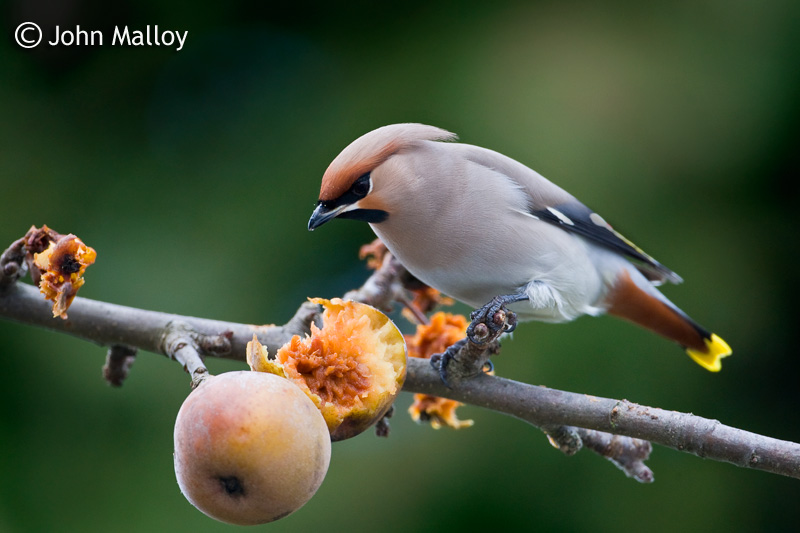 Another waxwing image from Monday 24th, the last image taken late afternoon. Thought I might have got back there again today, but after a tiring nightshift I didn't get of bed till after 3!
Posted by John Malloy at 17:07 2 comments: 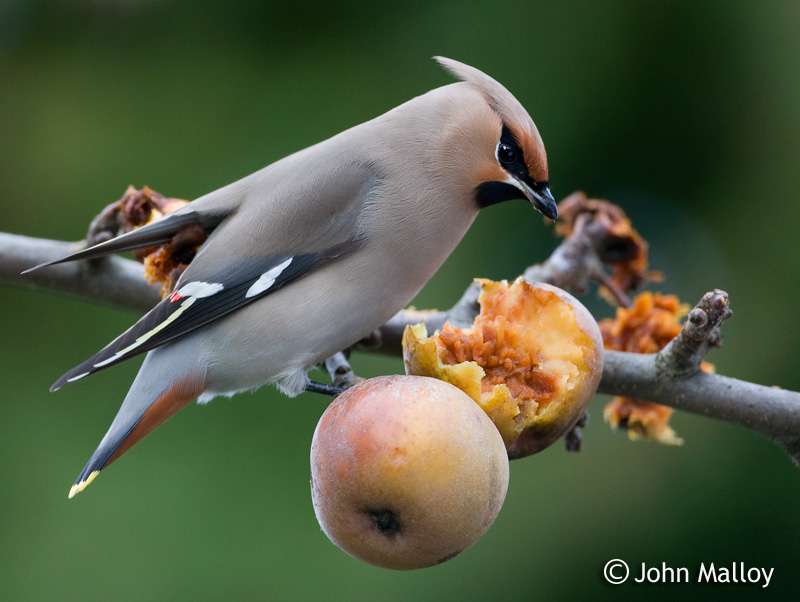 I spent some time photographing an obliging flock of waxwing this afternoon. Feeding on an apple tree in the Burton House pubs' car park, the car was utilised as a hide. The only available parking space was virtually under the tree, so the angle for shooting was restricted to one branch that was a bit too close for the hand-held 500mm - however, there was a nice conifer providing a green background.

As the sun went in and out, the lighting became interesting... 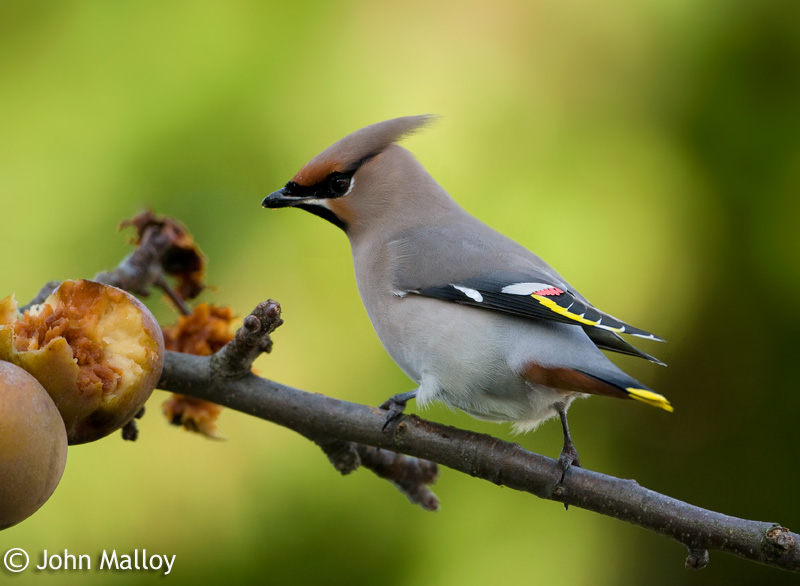 Number-wise the flock was tricky to count, there were certainly 37, maybe 47 ~ my count was never the same as the birds flew in and out! A single male blackcap was also feeding on the apples.
Posted by John Malloy at 17:45 3 comments:

From the archive: January 2004

I'm not getting out as much as I'd like this week ~ a new central heating installation and some overtime being worked is limiting free time. Mid-week I dipped the Blyth Harbour red-necked grebe and snow buntings, while the Morpeth hawfinches remain out of reach...

The image above was digi-scoped with a 4 mega-pixel nikon coolpix 4500 ~ much photoshop work has been done to reduce noise from the low light conditions that prevailed on my visit, and the un-edited jpeg file was very soft and washed-out ~ here's a thumbnail of the original: 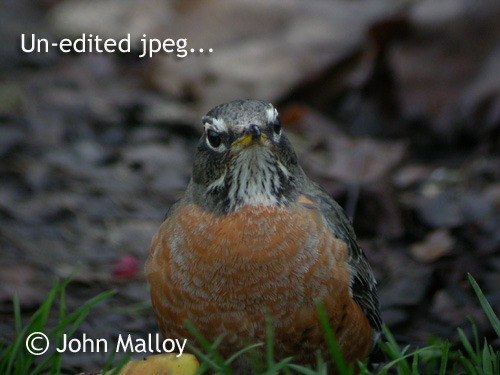 One of those "wishIhadhadmycurrentcameraequipentthen" moments - the slow response of the coolpix focus and shutter response was a real pain, especially when the robin was feeding.
Posted by John Malloy at 17:41 2 comments:

A single waxwing feeding on the hedge adjacent Burnside School on the way back from grocery shopping was enough to get me out of the car and back out onto the bike for a potter around the estate this afternoon. First port of call was back at Burnside, this time armed with the 500mm slung over my back while riding the bake. One waxwing turned into two, but neither would tolerate any hint of me stopping to take a picture... and off they went!

The Horton Burn was reasonably productive, given that the freezing conditions have eased. A single kingfisher patrolled the eastern stretch of the burn, while at the old fire station a mixed finch flock included at least six brambling. The finches (including chaffs, greens, bulls and golds) tend to follow the tree lined road from the old fire station round to the unfortunately named Boghouses, just north of the A192.

No waders were noted on the burn, nor any duck... they may return if the weather closes in again.
Posted by John Malloy at 18:40 No comments:

Ring-necked and Long-eared, but no Arctic...

Headed out for my belated first UK birding trip this morning. Picked up Mark at 0800 and by 0845 we were parking up at a cold and wet Cowpen Bewley Woodland Park. In the car park there was a familiar face ~ GM aka The Liver Birder was scoping the bird feeders having already been up to and back from the main site target.

At the pool we met up with John B and James. They had arrived earlier and had the drake ring-necked duck lined up for us nicely. Presumably its the returning drake from last year. Today's views were not as close as last time - the pool is ice free, so the ducks are out towards the back. The rnd was feeding with some tufties, gadwall and coot. The weather deteriorated somewhat so we moved on...

Seal Sands was very quiet, so we quickly retired to the cafe at Saltholme. Suitably refreshed we headed off to see the long-eared owl roost. Only one bird was visible this morning, as can be clearly seen from the photograph below.

﻿
﻿
﻿The remainder of the reserve was quiet - one little egret appeared to be having a chomp at some apples, while the feeding station outside the visitor centre was busy with greenfinch, goldfinch, fieldfare and starling.

The journey north was pit-stopped with my first visit to Rainton Meadow. Today it was possibly the most windswept part of Durham! Sure, we found the redpoll flock, plenty of lesser and mealies... but no clear coue's arctic types. Granted, the flock was mobile, and when feeding many of the birds chose the deck rather than the feeders... may be I'll try again. Siskin and goldfinch spiced up the finch flock on the hillside, while at the visitor centre, chaffinch and bullfinch mixed with great and blue tit.
West Hartford remains bleak (1 grey heron) and the Horton Burn was low on the avian activity front too...
Posted by John Malloy at 16:45 1 comment:

To complete the loop here are a few more images from the HK trip... All photographs here are from the January 1st visit to Hong Kong Wetland Park. starting where we left yesterday, here is another crop of distant black-faced spoonbill, consorting with grey heron, little egret and great white egret. At least a few are awake in this picture! I had only taken the 100-400mm lens on this trip - given that birding turned out to have been very limited I should have really made the effort to take the 500mm / 1.4 extender... 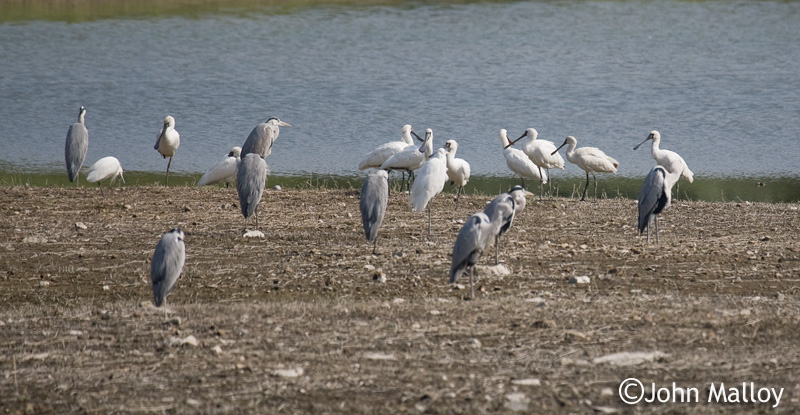 A few white-breasted waterhen fed in the mangrove channel - they would scuttle back to the mangrove every time a group of noisy HK families paraded across the boardwalk - non birding visitors were much more interested in the mudskippers that fed on the muddy channel banks! 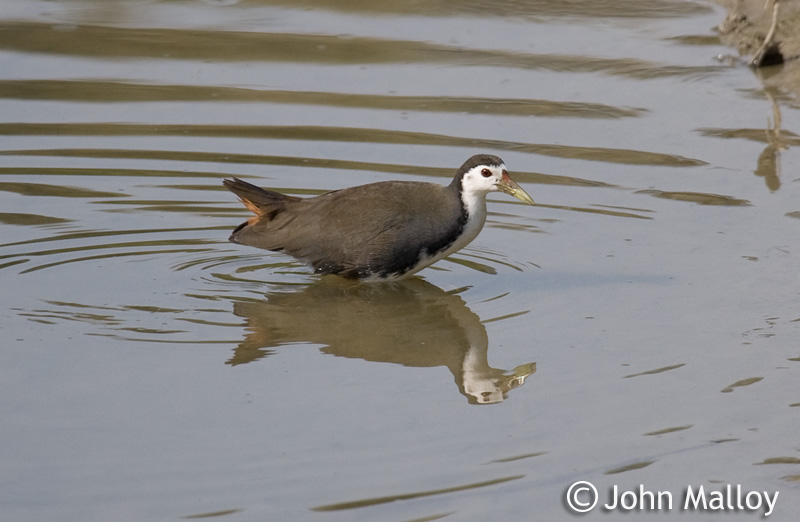 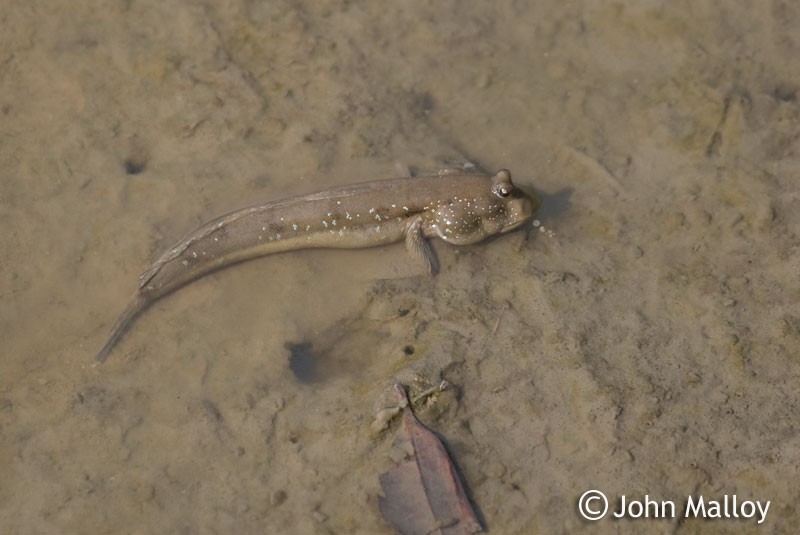 Dusky warbler were noted on a couple of occasions - this bird fed adjacent one of the boardwalks and was frustratingly hard to photograph as it fed frustratingly close in cover - chacking away frequently to hint at its location. 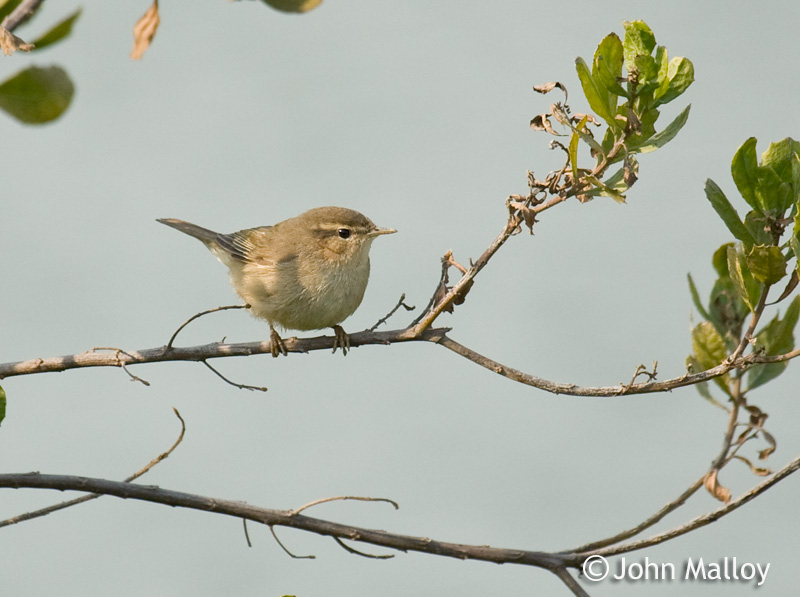 Long-tailed shrike were abundant on the reserve, and again, the 500mm would have been ideal for the better posing birds. This individual was close to the visitor centre late afternoon. Stunning birds indeed. 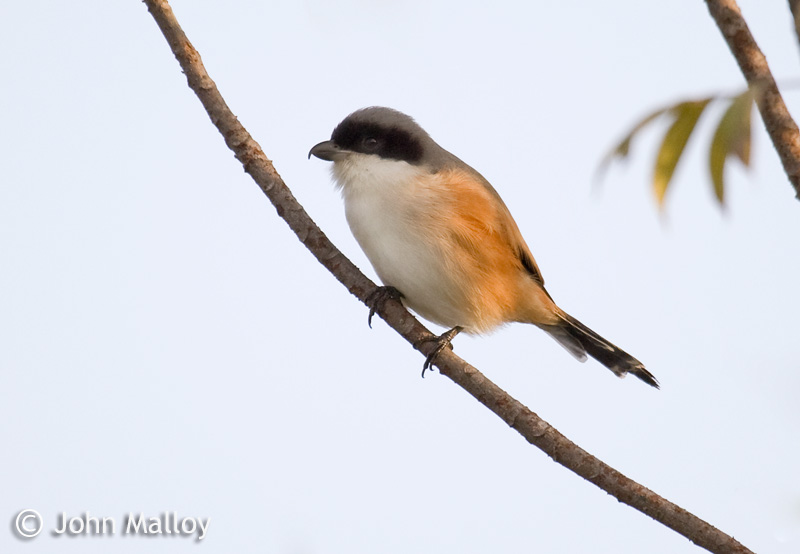 To complete the selection, here is another daurian redstart image - this female was feeding in shade but provides a better illustrative pose than the image from the first post. 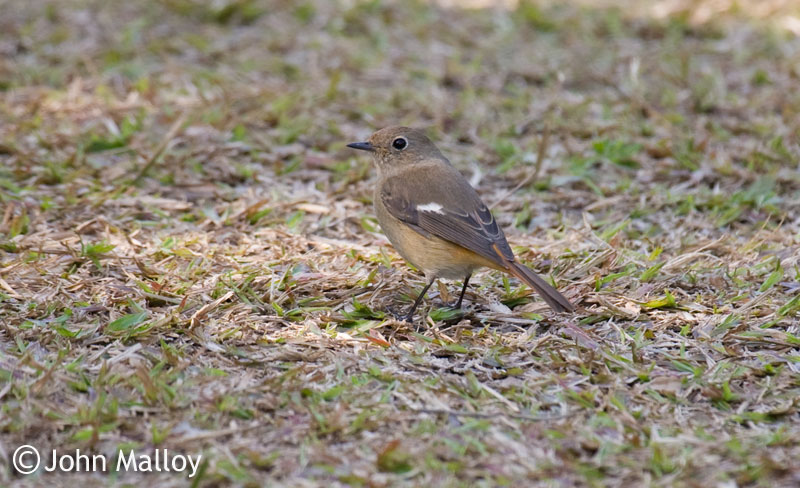 So that's it - short trip, very few photographs taken - but a reasonable selection given the circumstances.

As I conclude this short post, its just past midday in the north-east of the UK and temperatures outside have soared to a balmy -1.5 degrees C, and it's started snowing again... I can't wait to get out for some UK birding this weekend!
Posted by John Malloy at 12:30 2 comments: 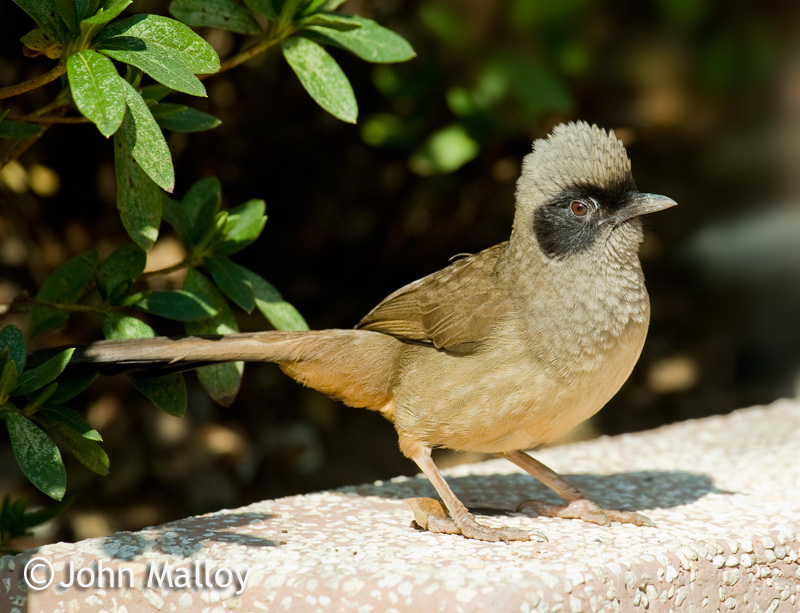 The masked laughingthrush (above) was photographed in Kowloon Park ~ tribes of this species roamed the hedge-rows and were quite bold. Kowloon Park also held a small flock of breeding alexandarine parakeet (we had a minimum of 11 one morning), black-necked starling, a large residence of black-crowned night heron, a pair of crested goshawk, while yellow-browed warbler and pallas's warbler felt more familiar. The first of several grey form (commixtus) great tit were also present, none of which were photographable as they fed in dense cover.

Hong Kong Park added black-throated laughingthrush to the holiday list (tho these birds are descended from captive birds) and fork-tailed sunbird were present in the canopy. None of the hoped for siberian rubythroat, rufous-tailed robin etc could be found...

The bulk of the birding was at the wetland reserve - an impressive visitor centre marks the reserve entrance, and conveniently it contains a decent cafe too!

Very popular with families when we visited on January 1st, the site is clearly popular... though most were there for a day out rather than specifically the birds. 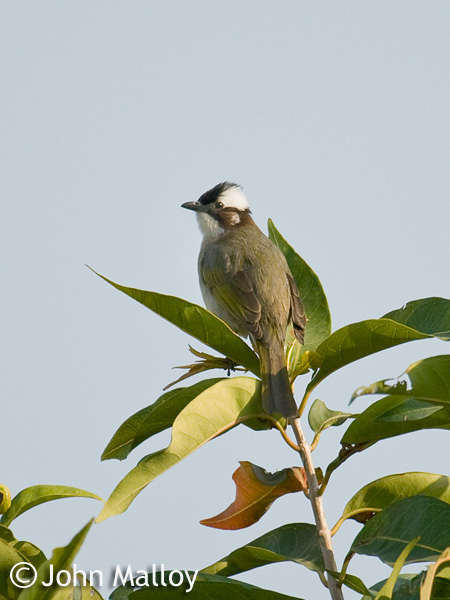 Bulbuls were evident near the visitor centre, with red-whiskered (crested), sooty-headed and, above, chinese loafing about. On the water, moorhen, great cormorant, teal, pintail, shoveler and grey heron were very familiar... 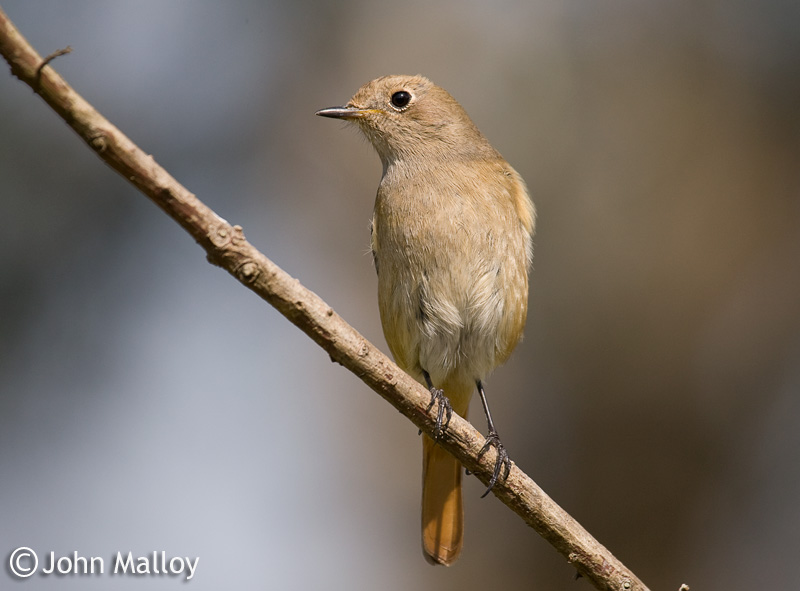 Daurian redstart were abundant, this confiding bird was near the river hide. At one point it shared a bush with a yellow-browed warbler and siberian stonechat! On the river there were more of the familiar waterbirds that have already been mentioned, but a black-capped kingfisher was new for me. 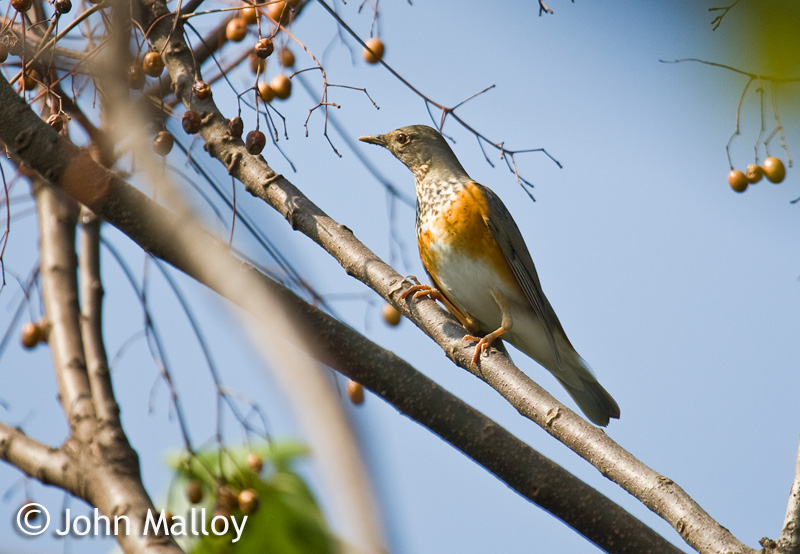 The grey-backed thrush (above) was photographed near the mudflat hide - this is a female - quite a stunner!

The star(s) of the show were on the mudflats - viewed distantly from the hide were a group of 16 black-faced spoonbill. In typical spoonbill fashion, they remained mostly asleep! Bit odd seeing them with so many grey heron... A few great egret and little egret were also present, while waders included greenshank, common sandpiper, marsh sandpiper and impressive little-ringed plover numbers. White wagtail fed on the shore and in cut grass, and appeared to be of the leucopsis race. 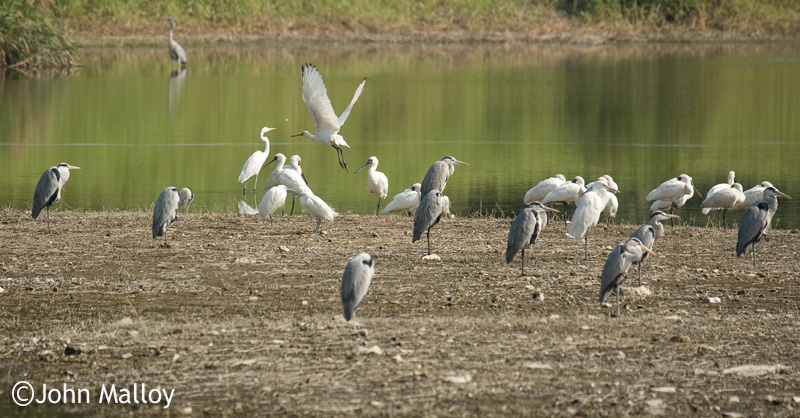 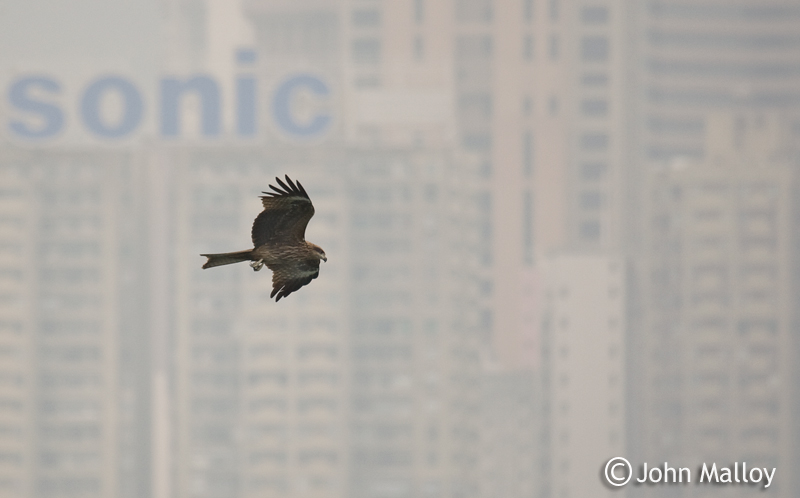 An abundant winter visitor to Hong Kong ~ this species was less tricky to track down than the Norfolk bird a few years back, with the kites utilising the hotel roof to rest inbetween scavenging. Photographically I messed up with this form of black kite, missing the bright sunny days to capture some images of them patrolling the busy waterway that separates Kowloon from Hong Kong Island. The kites would frequently take food items off the water surface, almost osprey-like!
Posted by John Malloy at 18:10 No comments: 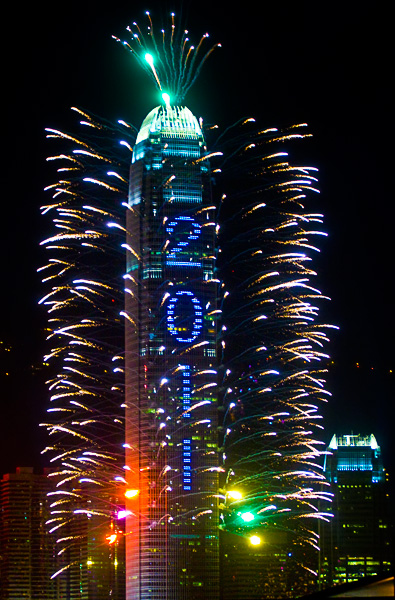 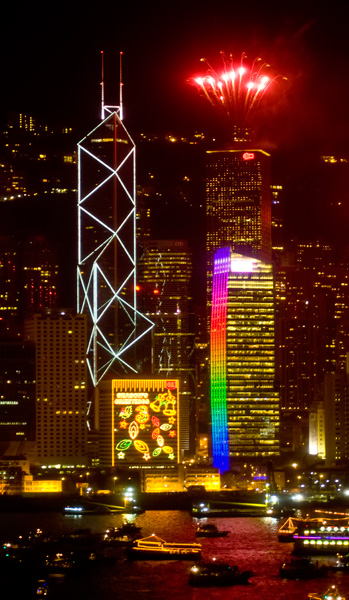 Was impressed at the guys opposite our hotel putting some bamboo scaffold up the other morning... 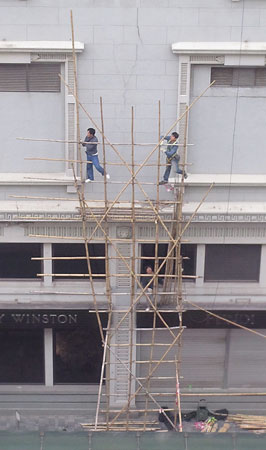 Until we saw this... the extension of the Kowloon Intercontinental Hotel!!! 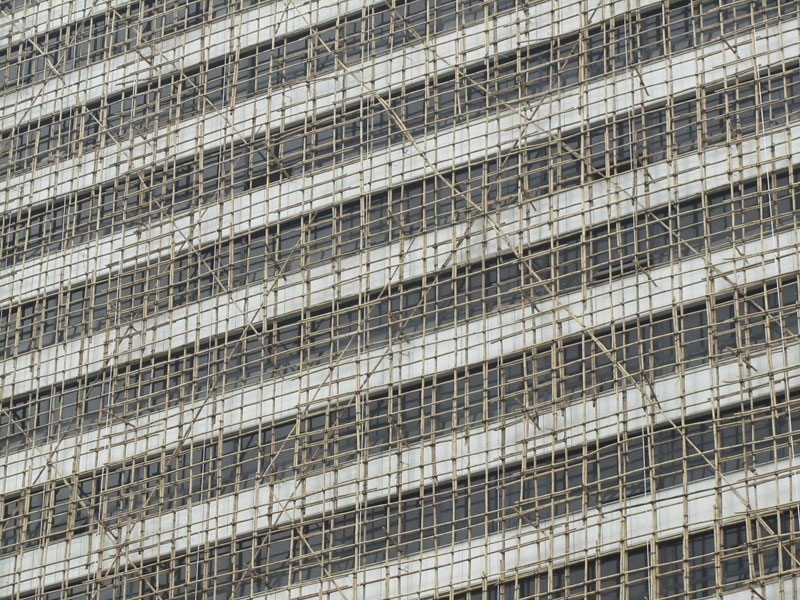 A belated happy new year from a warm Hong Kong.

Little birding to be had in the city - there is little in the way of green space... however, we managed to kick start the year at the Hong Kong Wetlands - a short MRT ride out of the city. Highlight was 16 or so black-faced spoonbill... so a good start to the year indeed.

Some very curious culinary choices on offer here - I declined the ducks tongue and goose intestine for our evening meal the other night!

More when I get back to blighty later this week...
Posted by John Malloy at 02:54 1 comment: