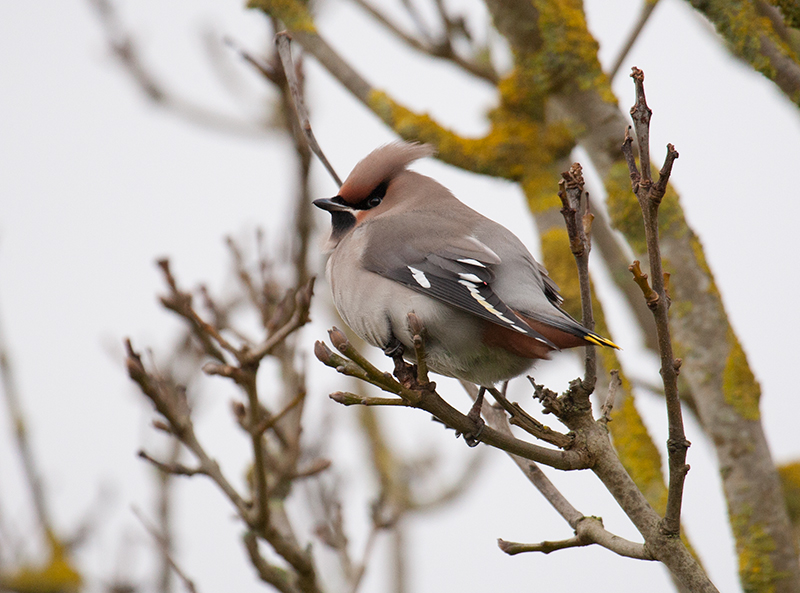 With a week of nightshift beckoning, a grey day reflected my mood - until the familiar trill of waxwing got my attention...

Initially 50 birds were present around the house this morning, while a venture out on the bike later on in the afternoon resulted in 21 lingering towards the park. The light was dreadful today, more of a "murk" in fact. The flock were not particularly doing much, and despite close views, were not in classic waxwing photography position - from the underside on  dull day like today they can look merely like grey starlings.

Still, always good to see. So what next? A potter further down the Horton Burn provided a much better highlight (for me at least), with the dipper back. I managed to grab a couple of pictures before a loose dog wandered to close, pushing the dipper downstream from the road bridge. I dare say a dipper anywhere else would not be so appealing, but when its on the patch, in-between the houses no less, then its "mint-tastic". Rather enjoyed watching the dipper feeding - amazing ability to swim in the fast flowing rapids that have been swollen with snow melt. 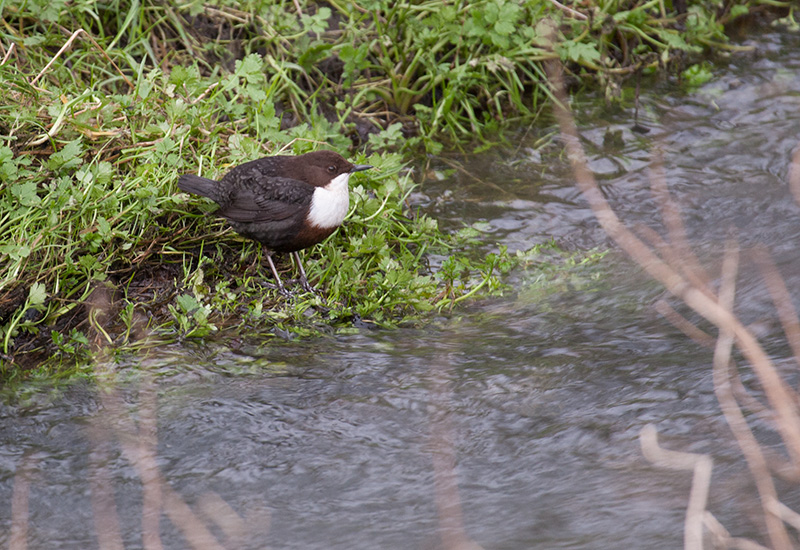 The old fire station end of the burn failed to produce anything, so I opted for a slow meander to West Hartford, which was in turn, rather quiet. A single buzzard was mobbed by carrion crow over the back and 1 siskin flew over. It seems January will remain short-eared owl-less, unless my luck changes this week...
Posted by John Malloy at 16:38 No comments: 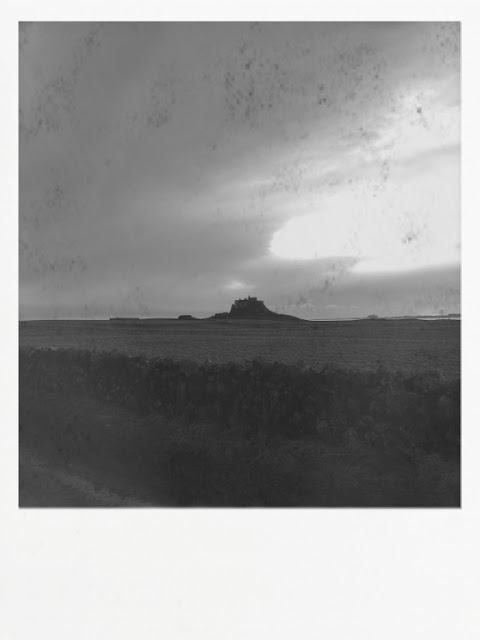 A mid to late afternoon cycle around northern Cramlington was reasonably productive, though the quieter minor roads were tricky as snow still covered.

Headed to Bassington via the industrial estate - a small flock of Siskin entertained on the journey there. The target bird at Bassington was green woodpecker - alas no sign, but highly compensatory was willow tit.

West Hartford was snowy and quiet, three roe deer being the highlight.

Horton Burn was reached as the light began to fade, and everything was quiet, except for one grey wagtail.

Was a cold trip out, but the snow is thawing fast. Maybe tomorrow will bring something new... 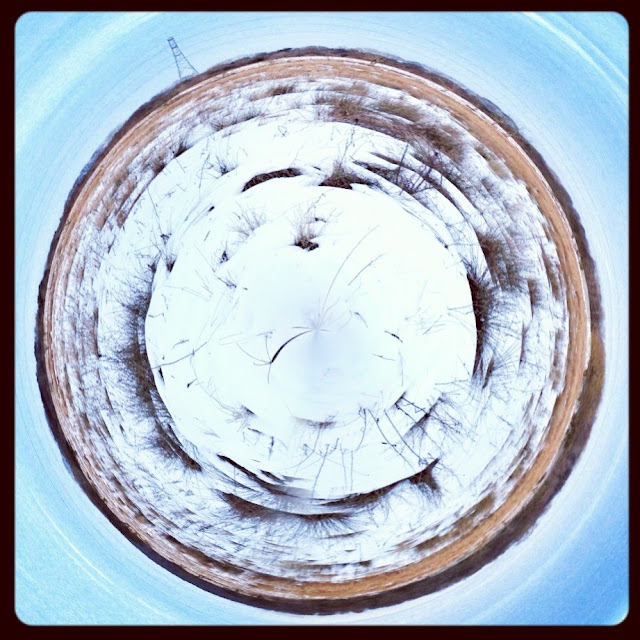 Apparently Woodcock is rarely active in daytime. I suspect this unfortunate bird is also rarley active at dusk either...

Found this beauty on the roadside in Cramlington this afternoon - that's two on the patch in two days... although this will not count for my "bike" list. 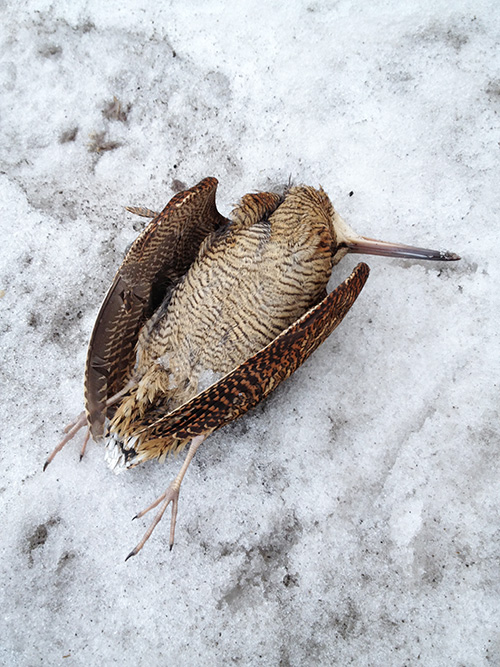 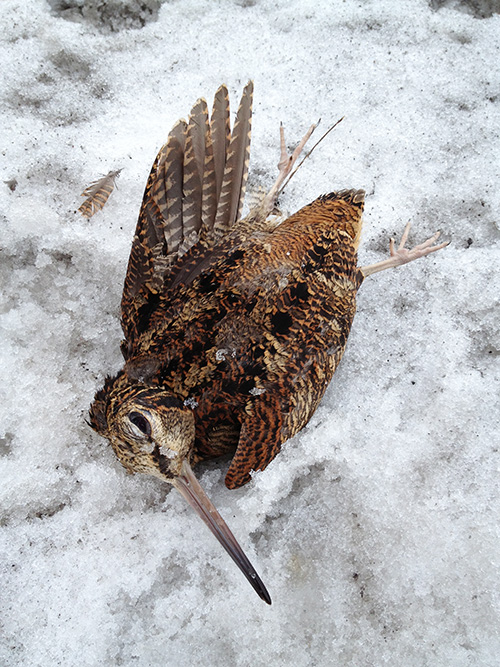 The short trip out took me along the eastern stretch of the Horton Burn - no kingfisher/grey wagtail nor dipper, but six mallard remain.

West Hartford provided two stonechat, 2 stock dove and six reed bunting. The pools are 95%+ frozen still, so a lone black headed gull was all that was present on the ice. No shorties still...

With an early shift complete and news of a late morning goose nearby, a quick trip out was called for inbetween wake-me-up coffees.

Headed out just after two, turned onto Horton Drive and boom, woodcock flies over the car. Good start, it again shows in flight as I cross the Horton Burn.

Arriving At the Blyth links car park soon after, it was pleasing to find some of the lads watching the afternoons main quarry - albeit distant. The Tundra bean goose had eluded me on a couple of occasions already in 2013, but not today, as it fed in fields just off the coast road with almost 200 pink-footed geese. Too distant and gloomy for the camera, I resorted to attempted iPhone digi-scope shots. Can't quite manage anything other than record pictures...

Meanwhile a merlin arrives, promptly landing on the fence giving great scope views. And that was that, a decent 45 minutes out. 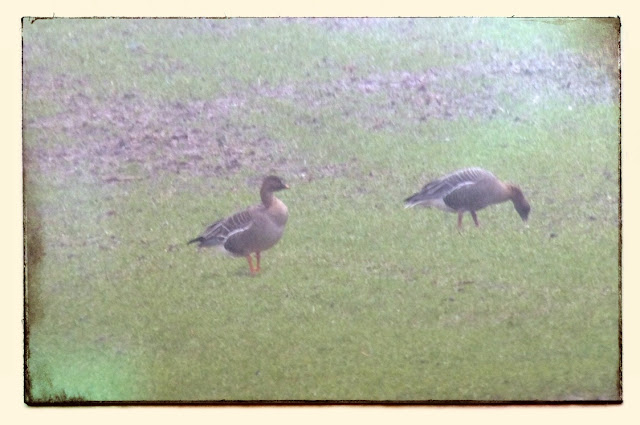 A tricky walk along the Horton Burn was worth the effort. Snow always adds a bit if excitement to the proceedings and today's tramp was as expected - providing a few surprises.

First stop provided a treecreeper - only my second on the burn, with kingfisher, grey wagtail and the first of eight snipe "lifts".

Towards the old fire station six mallard fed on the burn, while the other direction provided a couple more grey wagtails, fieldfare and redwing.

At West Hartford 34 grey lag geese flew south, 18 lapwing stood out on the ice and a single brambling (my first on the site) provided an avian fix. 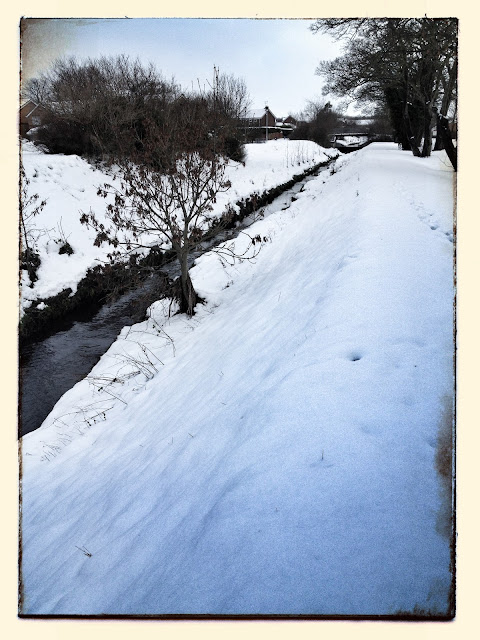 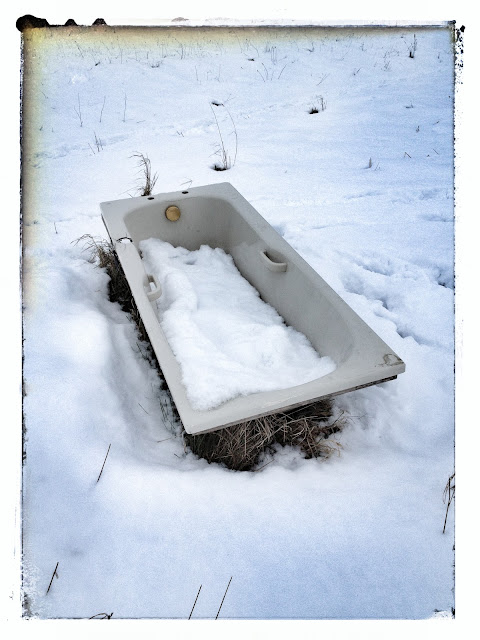 A bright but cold morning, so bike out for a return to Holywell and potential goose inspection.

An uneventful cycle there, the goose flock located a bit further away than I expected... Maybe 350 pink footers in total and no doubt one tundra bean. Started the trawl through the flock but viewing was difficult as many were standing in the ploughed mud. Picking out orange legs was to be a major challenge without my scope. The pain if distant observation was curtailed by a couple of mindless biddies who opted to walk through the gooses favoured field - lifting them all - and off they went!

At the pond the water was quiet, while the feeding station was a little busier, tree sparrow was new for the bike list.
Posted by John Malloy at 16:10 No comments:

A cold morning checking out some local spots with Mark. Jack Snipe easy at the first port of call, while Holywell was not so productive - no sign of the pink foot flock, and subsequently no tundra bean to be seen. Tree sparrow was new for the year.

Killingworth produce the tame whooper swan but the was no sign if any goosander or great crested grebe.

Gosforth Park was our final stop, with the woodland providing nuthatch and jay, while on the pools/reedbed, a single brief water rail was the highlight along with plenty of snipe.

Still lots of omissions to the January list, so lots of reasons to keep going out... 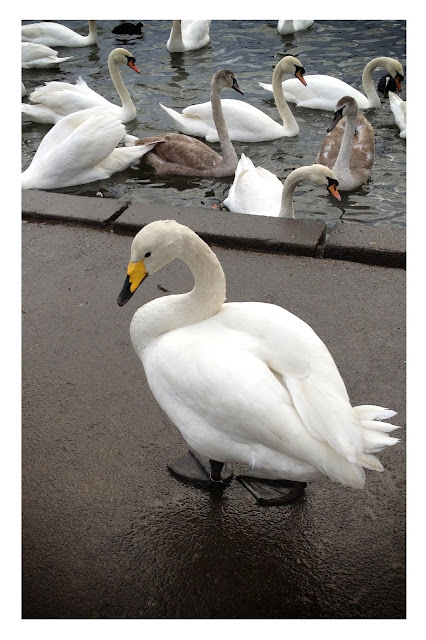 A quick trip out on the bike this afternoon produced a connection with the waxwing flock (approx 15, seen from moving bike!) just down the road from Northumberlandia, and Cramlington year ticks in the form of stock dove, lapwing and mistle thrush. Still "needing" pied wagtail, song thrush and the like, the joys of January birding...
Posted by John Malloy at 17:32 1 comment:

Email ThisBlogThis!Share to TwitterShare to FacebookShare to Pinterest
Labels: Cramlington

A saunter up the coast late morning was hindered by wet and dull weather. It was a tick a run exercise I'm afraid, with target species of Mediterranean gull, white-fronted goose, long-tailed duck etc "ticked off" Bonus-wise an obliging merlin at Hemscott Hill would have been a photographic treat had I taken a camera, though twite did not show there (just a big flock of goldfinch).

No slavonian grebe, smew or bittern at East Chevington (a vist combined with the heaviest rain), but compensatory were three waxwing opposite Blyth's Asda store (same corner as 2012) while getting nightshift supplies.

Back on the bike-saddle on the just as wet and dull patch, jack snipe was secured, but stonechat and short-eared owl still elude. Plenty days left to try and catch up with those...
Posted by John Malloy at 16:45 No comments:

The first few days of 2013 have been a slow meander bird wise, with all ornithological activity done from the seat of my bike.

New Year's Day was curtailed by high winds, so the north of Cramlington was concentrated upon - the Horton Burn dipper was picked up near the affectionately named Boghouses, and kingfisher, grey wagtail are always pleasing for the day one year list. Jack snipe is available in the vicinity but a lack of suitable foot ware prevented a look. Later perhaps.

Wednesday to Friday was spent on 12 hour shifts - so it was dark both sides...

Saturday was the bird clubs winter big day - while for me it was a shorter than expected trip out on the bike with a trip to Blyth seafront and the realisation of an apparent slow puncture. It was a quicker ride back as I fought to beat the impeding flat tyre and long walk. Still, the short journey produced a few new birds for the list including red throated diver, cormorant and shag.

News on Sunday of crossbills in Cramlington saw an early afternoon bike ride to Valley Park - a smashing spot. We managed three crossbill (7 had been seen earlier), a couple of roe deer, plenty of reed bunting, chaffinch, bullfinch, great spotted woodpecker and the like. At the Southfields roundabout the adult lesser lack backed gull flew over the road, always good to get this early as its quite a scarce winterer here.

Beacon lane provided redwing and fieldfare and 45 grey lag flew west over us as we approached Bassington NR. Our arrival at Bassington was greeted by seven lesser redpoll in the north-west corner, another good species to "get out the way" in January. Not much else there, a couple of goldcrest and a blackbird to be precise.


The wonders of modern technology informed is that today's bike ride was 16 odd km, not a bad circuit, of which the map can be seen here:

Hopefully I'll be out tomorrow, maybe travelling a bit further too.