Another venture North - again up to Stag for a look out over the extremely choppy sea. Patience is a virtue - and what seemed an age looking at the same group of Scoter, the Black eventually gave itself up.

3rd in County for me, but perhaps the same bird each time. 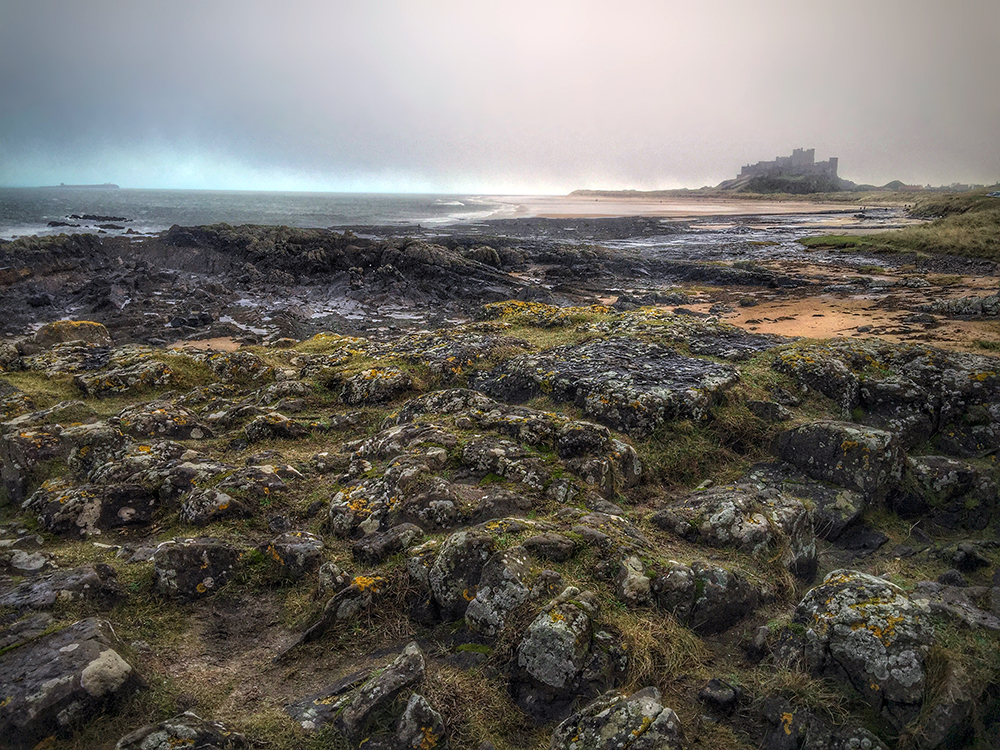 45 Whooper Swan just north of the "Arctic Redpoll field" at Birling Carrs on the route home...
Posted by John Malloy at 17:44 No comments:

Fowls, Un-seasonals and a Yank

Started the day at Killingworth where the showy female Smew continues to perform on the smaller lake.

Willow Tit at Hackworth then onto Holywell to check out the geese - the two Eurasian White-fronts were flying around the fields upon our arrival, while the Tundra Bean Goose resided on the pond with the Grey-lags. No sign of the Mandarin. Soon after our arrival in the public hide, the two airborne White-fronts circled the pool and managed to attract the attention of the other geese, taking them off to the western fields, permitting a couple of iPhone/scope images... 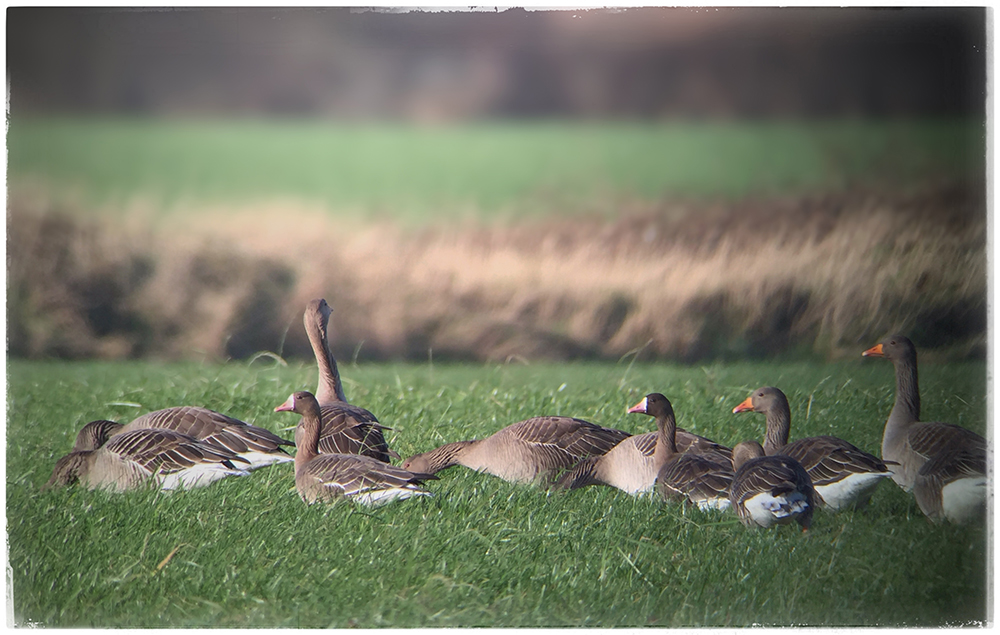 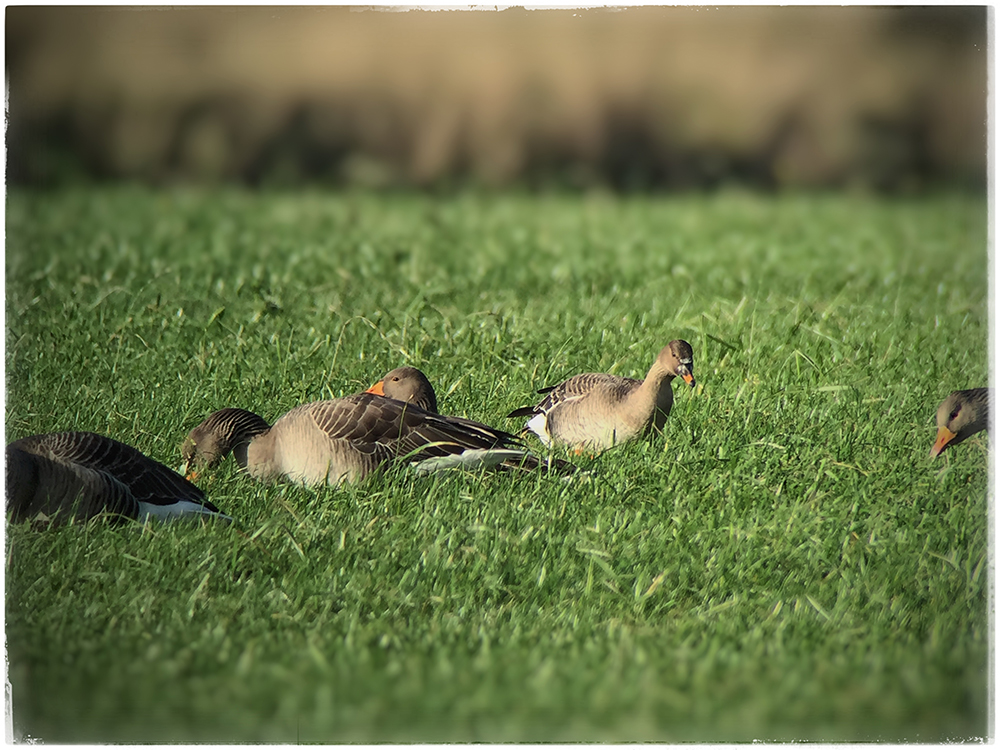 Up the road to QEII lake for another Slavonian Grebe (no sign of the Iceland Gull), then onto Cresswell, where a Ruff and female Marsh Harrier complimented the long staying (and long distance) Long-billed Dowitcher.

Completed the coastal visit with a look out from Druridge's Budge screen - no Water Pipit, but three more Eurasian White Fronted Geese over the back.

Closer to home, 4 Little Egret on the burn along with a single Grey Wagtail
Posted by John Malloy at 17:25 No comments:

..."Arctic" Redpoll, an interesting bird up at Birling Carrs today... this bird has caused a lot of discussion over the last week...


Some images - 500mm & 2.0 extender... rather distant. Missed it on the fence line, and later too distant to photograph when the huge rump patch was fluffed out in the western hedge line. 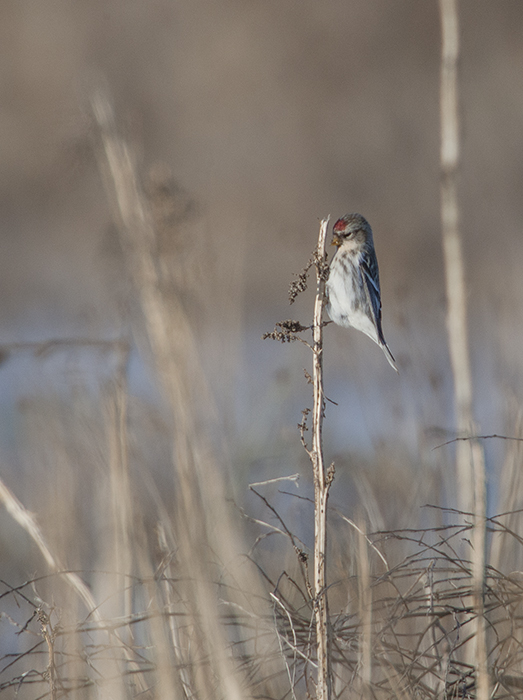 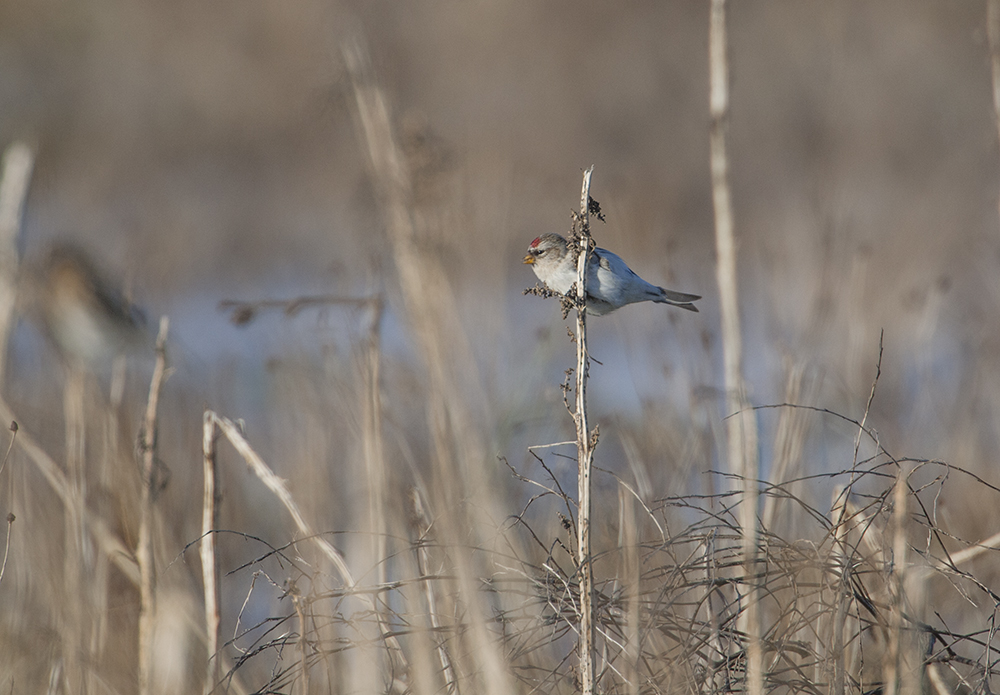 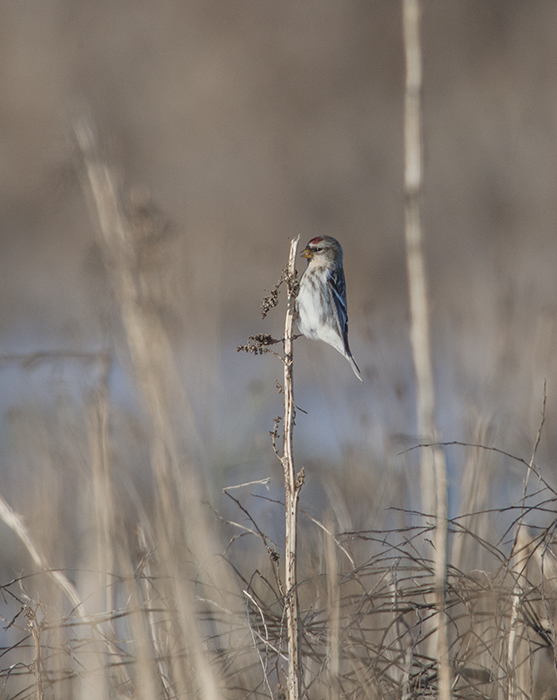 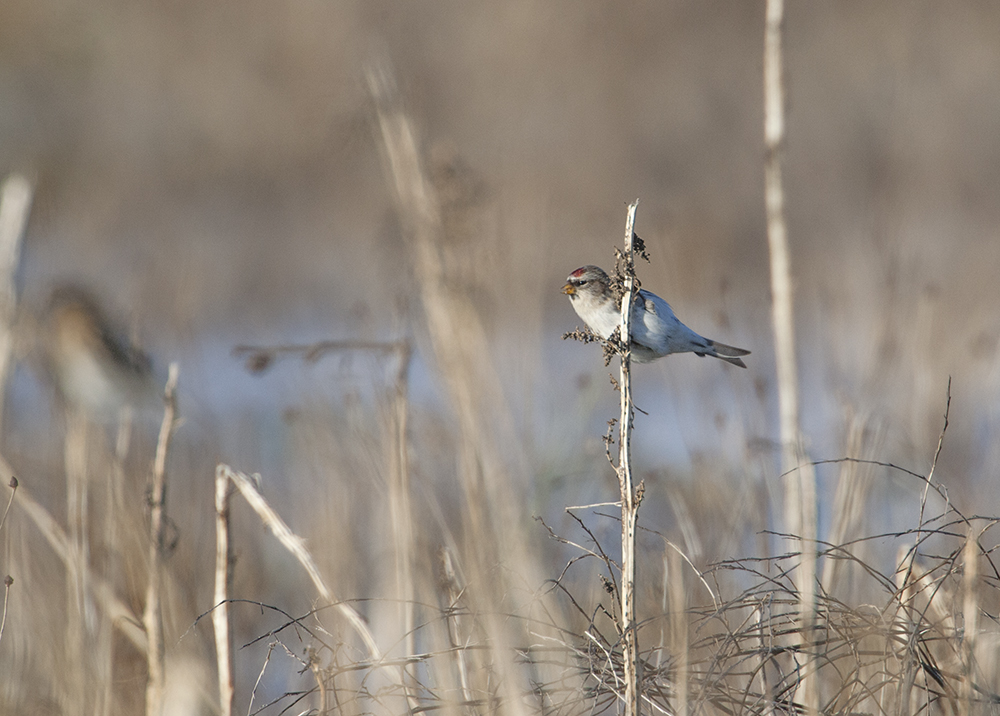 Migrated north late morning to check out the low tide across Fenham Flats... thousands of waders on view and a hundred or so Pale-bellied Brent Geese, a single Little Egret and outside the hide, a flock containing Tree Sparrow and Twite. No sign of the Hooded Crow, it appears to have been around Holy Island.

Budle Bay was also busy, with an equal number of Brent Geese also present. Single Peregrine on fence posts to the north. 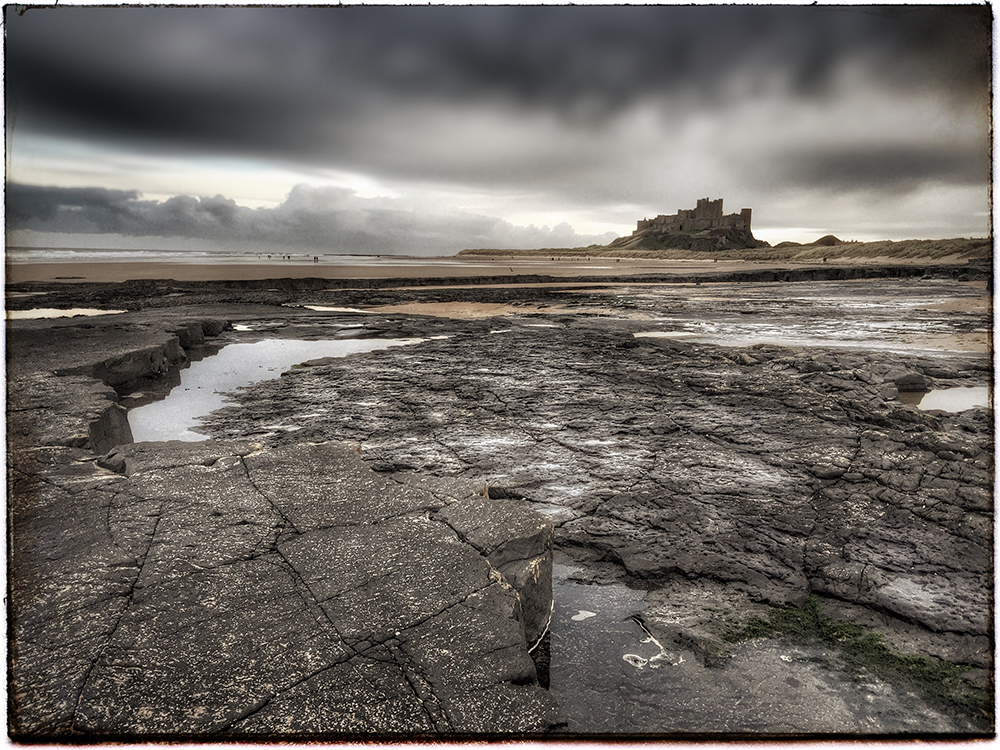 Monks House Pool, increased in size from the wet weather, provided nice views of the Red-necked Grebe that was picked up a week ago - no Water Pipit in the quick soiree, but not a concern given the Druridge bird last week.

No sign of the Black-necked Grebe at Drudge Bay CP (Little only noted), while Cresswell provided, at last, the Long-billed Dowitcher, along with Barn Owl, plenty of Wigeon and Teal.
Posted by John Malloy at 18:45 No comments:

Cycled the burn this morning, little of general interest, but a relative patch mega to finish the trip...

Highlights - noticeably high numbers of redwing, 1 fieldfare, grey heron, 2 moorhen, siskin. No egrets today but... A dipper - only the second winter we've had one.

A busy day with lots to do, so some restricted birding ensued, primarily catching up with birds found during the week.

3 cormorants at Arcot were reasonable for January- but little else there.

Green-winged teal at Backworth came with bonus short-eared owl and geese of the barnacle and white-fronted variety.

Up the coast with the crowds... No sign of the Iceland gull at QEII and an apparant miss with the great northern diver at Widdrington (drake scaup) but an seemingly eventual catch up with the water pipit at Druridge. No luck with the LBD

On the sea off Cresswell little of note, red throated diver and common scoter, but later, off Blyth there was a compensatory little auk close in shore.

As the "daylight" faded 2 long-eared owl and a few woodcock bought proceedings to a local end.
Posted by John Malloy at 18:21 No comments:

Little Gulls prove to be the highlight today, with an adult and first winter off Briardene and an adult at Tynemouth Haven.

Today's sea was spectacular, and made up for little in terms of additions to the "yearlist" - no sign of the black redstart at the foot of Tynemouth Pier, but the odd purple sandpiper in the area to stop and look at.

Fading light prevented any further birding, and it'll be a few days before I get the chance to resume... 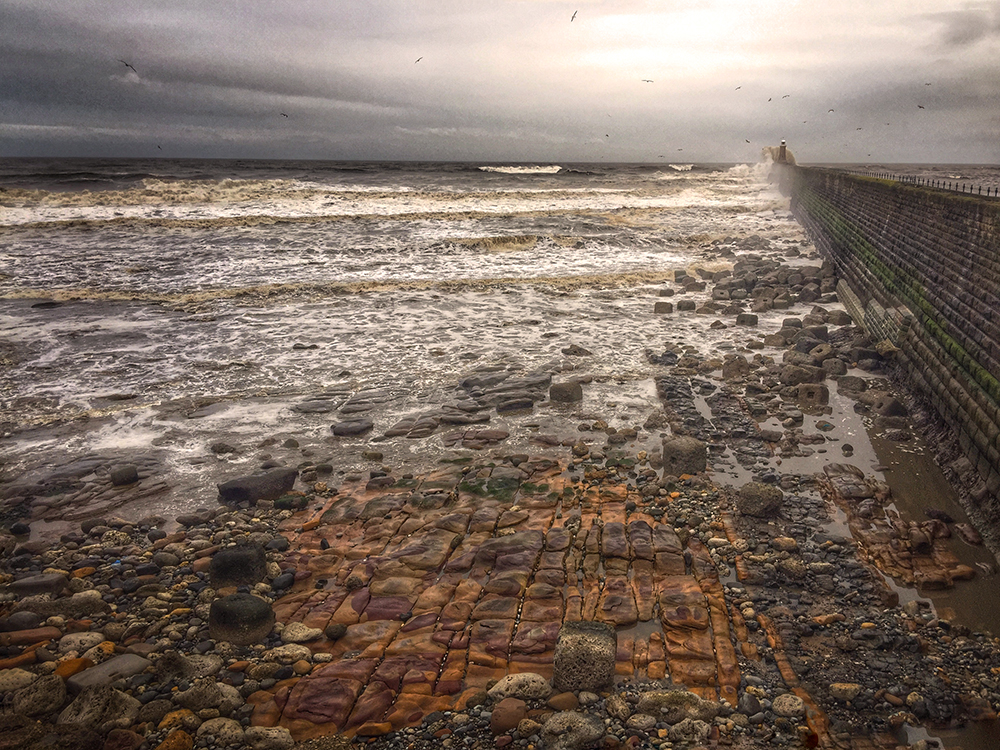 Day 1 of 2016 was a humble affair, with a couple of mild pottering in the afternoon. Pottering 1 saw a quick visit to the delights of Killingworth and the smaller portion of the lake. Our quest was simple - the redhead Smew, which has remained teasingly close to Cramlington with residencies at both the private Shasun pool and over at Big Waters.

Ascot was not productive Asio-wise, but a number of common year list padders sufficed.

Pottering 2 was later in the afternoon, with a jaunt to West Hartford; fine views of hunting Barn Owl were obtained.


Day 2 has weather-wise been a torrid affair, the birding somewhat better though.

QEII Park at Washington provided great views of a 2nd Winter Iceland Gull. No camera other than the iPhone, so I tried my hand at "digi-binning" with moderate success...


With the smell of success from the comfort of the car, destination two was to be a similar mission - Widdrington providing Great Northern Diver from the driving seat.

My arrival at East Chevington was made somewhat better with a Lesser Redpoll on the trackside. The North Pool still had the Slavonian Grebe along with some more usual suspects - including a nice party of Red-Breasted Merganser.

Heading up the road to Druridge Bay Country Park provided the biggest surprise of the trip - rolling down the bank to the water sport car park I noticed a bulky bird hunted on the grass next to the gravel path. Stopping, winding down the passenger window I raised my bins to be confronted by a stinking Pomarine Skua! Bizarre!

With the "success" of the Iceland Gull digi-binning I set my self up to grab a record shot - only to find the bird had lifted.... No sign anywhere despite a good look round the pool / car parks...

Druridge Pools did not provide any Water Pipit, but in compensation 1 drake Pintail and a scabby drake moulting Scaup were noted.

Cresswell appeared Dowitcher-less, but there was a chance it was handled up somewhere out of view. A few Snipe, 1 Water Rail and hods of Wigeon / Teal.

At Snab a half hearted sea watch in the wind, rain and depleting light did not provide much out of the ordinary - 1 Gannet, Kittiwake, Fulmar and a few Guillemot. Newbiggin didn't produce anything either - not even a Mediterranean Gull! Sea was spectacular though....

Final stop, River Blyth - few waders added to the day list and not much else.