Nice arrival in post today - got the cover image on the 2010 Durham Bird Club annual report... 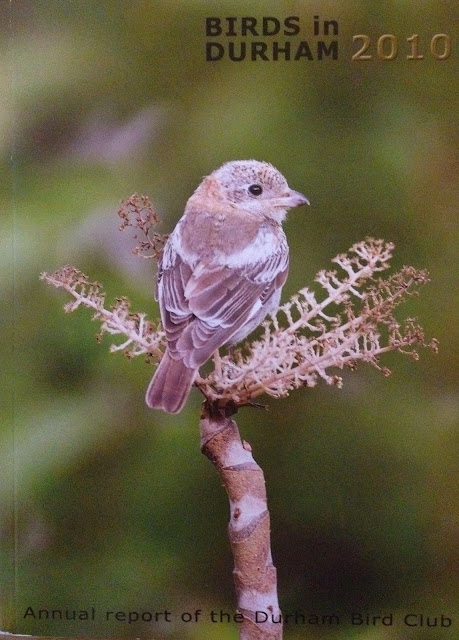 Three short eared owl noted, with 2 at East Chevington and a single at Druridge.
Posted by John Malloy at 17:29 No comments:

A late afternoon visit to West Hartford was of mixed fortune - only one brief short-eared owl (bloke walking dog over field did not help). Hints of spring were evident, with seven oystercatcher, a singing skylark and a couple of lesser black backed gull. 1 grey heron on the pool and two over kept the gulls active - lifting as the herons moved through. Most impressive was the number of common gull, maybe a hundred through, all tumbling down to the pool before moving onto the coast. Hundreds of wood pigeon over the back, and nine stock dove...
Posted by John Malloy at 17:06 No comments:

Initial excitement was had with the distant view of two long white necks sticking out of the pools near side vegetation - two mute swan. Bewicks or whooper would have been better!

Up to six short- eared owl patrolled the fields, with a couple sitting it out on the western fence. The occasional snipe was lifted as the owls skimmed the marsh edges.

Among the forty two lapwing, two early oystercatcher were present - numbers should start to increase over the next few weeks. Fowl-wise, 28 teal were on the pool.

As with most afternoons gull activity was good, with c, h and bhs' dropping in prior to heading off to the coast to roost.
Posted by John Malloy at 17:37 No comments:

A bright but windy day saw us head north to Stag Rocks for a walk along the beach. Not much in the way of birds picked out as the sea was rough. Long-tailed duck are always good to see, and they were complimented with razorbill, guillemot, eider, shag, purple sandpiper etc. Unable to pick out any slavonian grebe nor any divers! 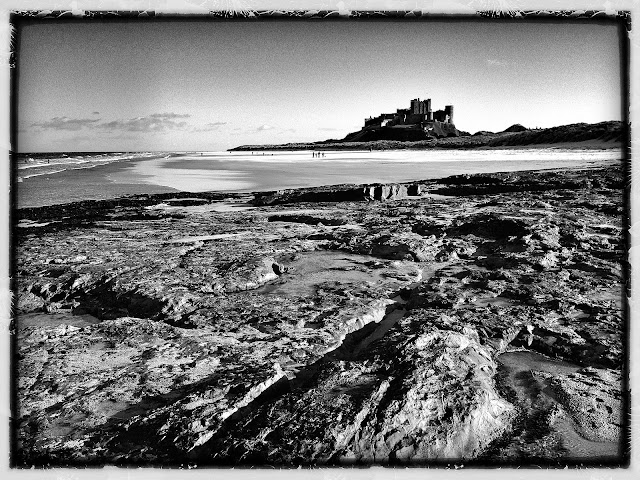 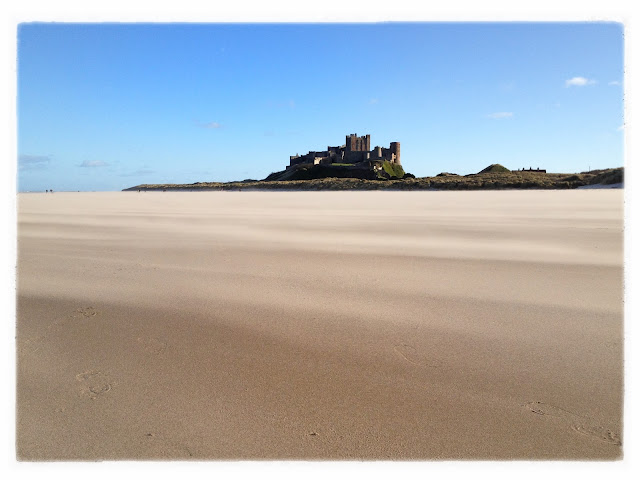 With all the excitement of Saturdays trip and a selection of fine ale in the evening, Sunday dawned dull and late ~ 11:15 to be precise! Several cups of coffee, a read through the 2010 issue of "Birds in Northumbria" and an investigative text to GM defined the reduced hours availability for birding - back to Bassington.

Twenty steps in, and with bullfinch, goldfinch, greenfinch, chaffinch, blue tit and great tit already in the bag, the purpose of the mission was complete - up flew the female green woodpecker from the track. Green wood is annual in Cramlington, probably overlooked, and most often heard at Arcot in the Spring. So an apparent wintering bird is to be savoured. Very flighty, doing a circuit round the "reserve"... It's a gem of a spot - small and full of birdlife, a site to watch...

In addition to the species already mentioned, a great-spotted woodpecker was calling, while blackbird and song thrush were also noted. 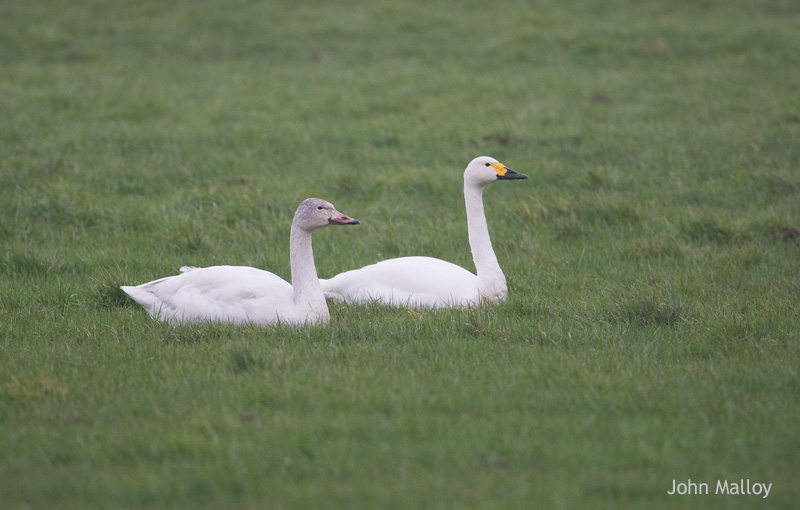 A brief stop at QEII park, Ashington was rewarding with good numbers of gulls (nothing unusual amonst them), great crested and little grebe, many coot, tufted duck, wigeon, goldeneye and a single whooper swan with the mutes.

The sight of a couple of hundred geese flying off from the West Chevington / Maiden Hall Lake area was not promising, but alas, the main target was still present just west of the "mound"... two bewick's swan. Always tough to get up here, this duo appear to be possibly birds 5 & 6 of the winter, with the Big Waters/Arcot and Ellington bird being two adults. I'd not seen a juvenile quite like this one, the pinkish toned bill was a surprise. 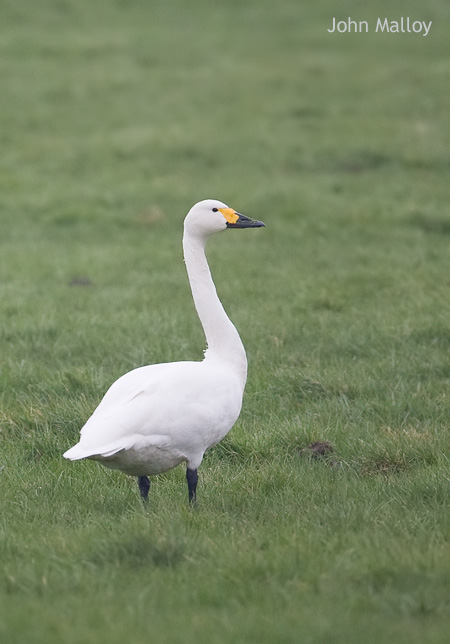 Druridge Bay County Park provided my first smew of the winter - three duck types - all out of camera range.

Onwards to East Chevington and "a missed by a few minutes" bittern made the cold feel ever so slightly colder. The hat and gloves remained nice and warm in the car. A single slavonian grebe frequented the northern part of the north pool, while lake fodder comprised of grey-lag geese, wigeon, tufted duck, a single drake gooseander, cormorant etc.

Pointing the car south towards Cresswell the journey was interrupted by a quick stop near Bells Farm - the pink-footed goose flock were close to the road, and a party of twite (maybe fifty birds) buzzed over the dunes.

An inspection of the goose flock ensued, and much to my surprise, and subsequent fumble into the cars boot, two tundra bean geese were effectively the closest birds to the road! 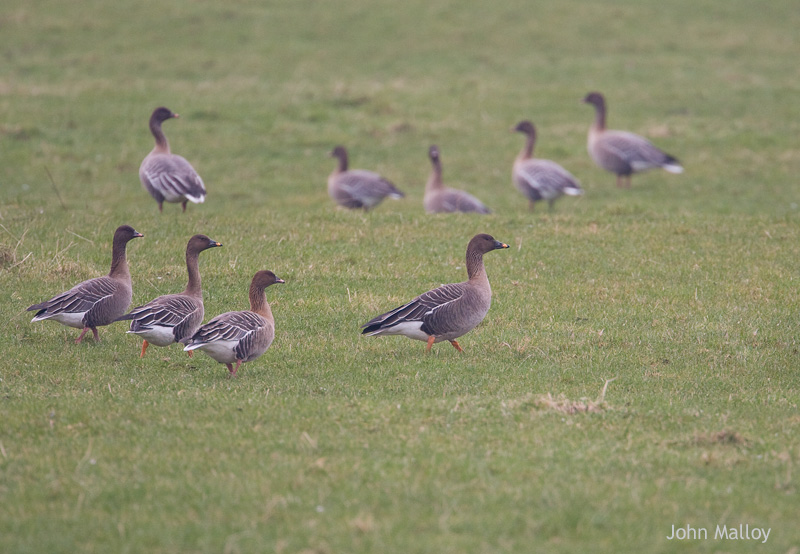 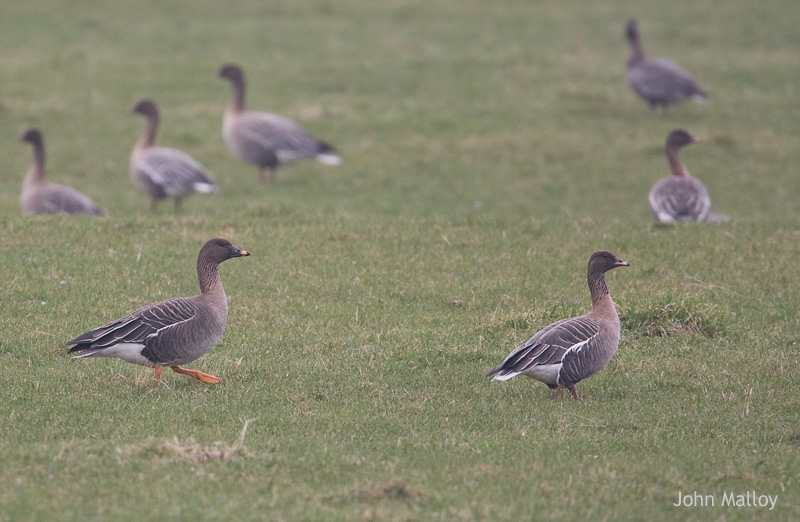 The clicking of the camera shutter wasn't favoured and the closest group moved into the centre of the field... the photograph below illustrates the darker backed bean geese and thinner white trailing tail tip nicely with the flying pink-foot. 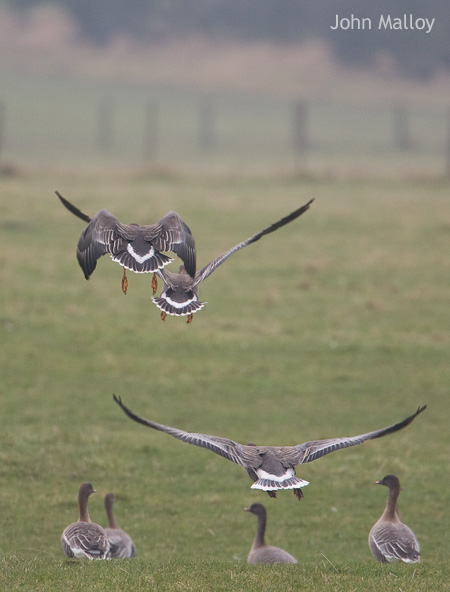 Cresswell was well worth it's visit. Pretty much as soon as I arrived a male pheasant did the decent thing, flushing the jack snipe out of the reeds and onto the sandbank in front of the hide. All too quick for the camera though. Bizarrely the pheasant took a strong dislike to the miniature snipe, and proceeded to ruffle itself up and chase the jack snipe back into the reeds! 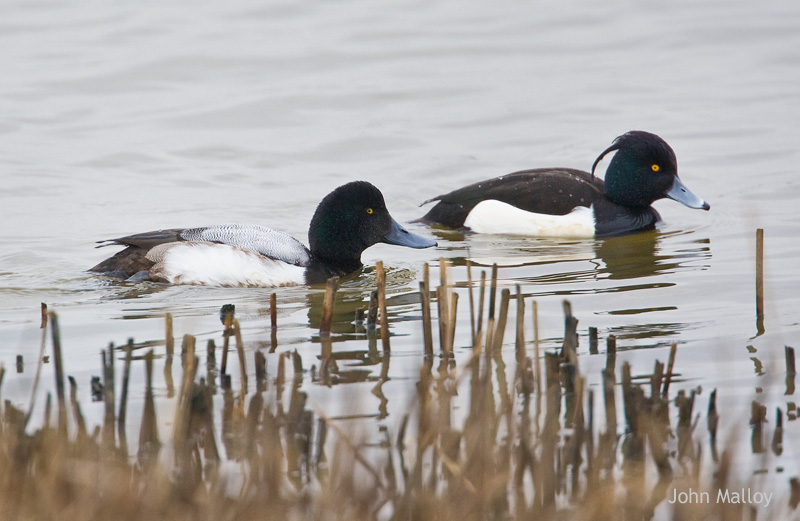 Waterfowl were good too... a single drake scaup fed on the pools southern edge, along with tufted duck and some very smart red-breasted merganser and goosander. Early afternoon had completed the triple sawbill fix. 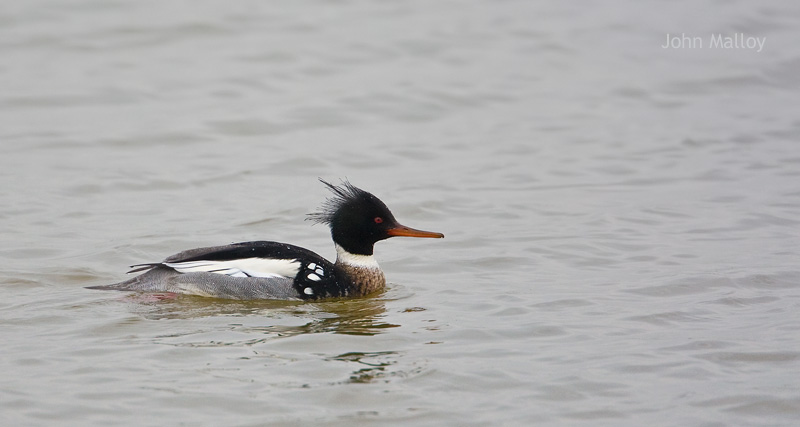 Over the dunes two short-eared owl had been observed from the hide - and the return to the car was delayed as they grappled over dunes-rights. I'm pretty pleased with the "grab" shot below... 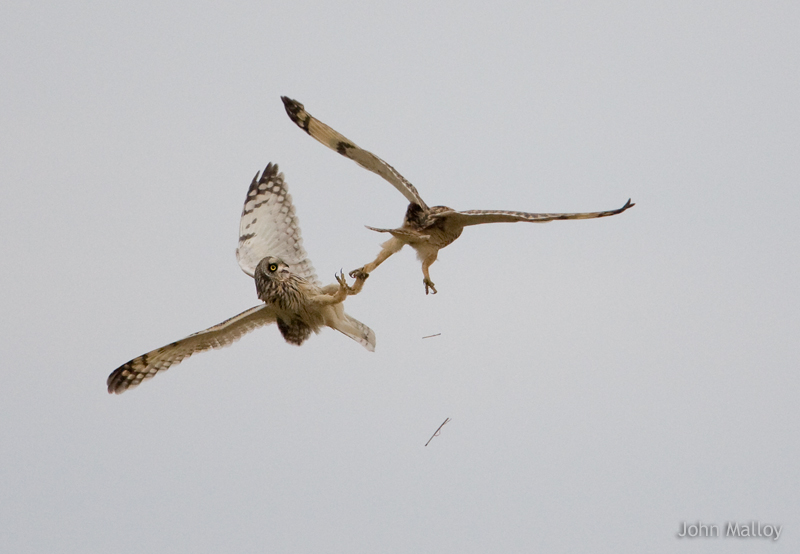 Meanwhile a pair of stonechat worked the road edge - the recent hard winters have taken their toll on this species, so it was good to see a pair. 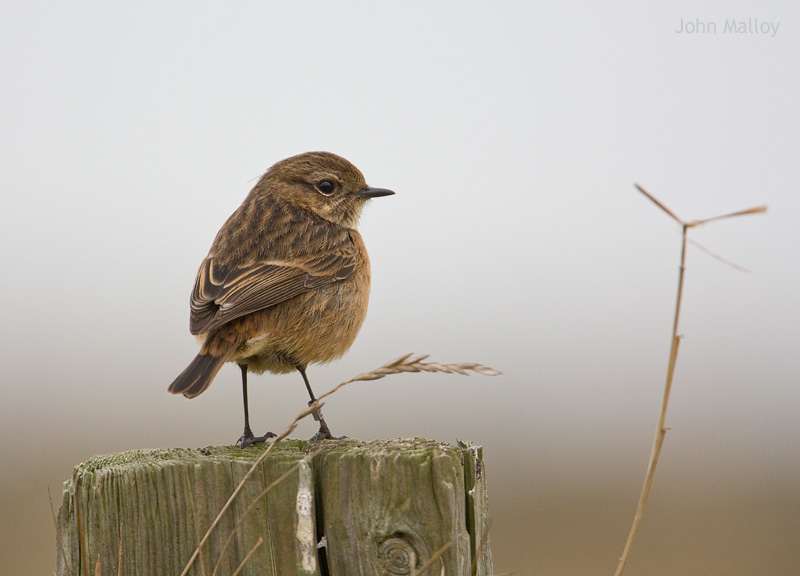 With the 'Bay pretty much cleaned up I headed back towards home - two attempts at black redstart (Newbiggin and North Blyth) were fruitless ~ though Mediterranean gulls at the former always add value to a stop.

West Hartford was the final destination as the dull afternoon progressed to dusk. Two fox were a bonus as they chased each other round the fields - the dog stayed put long enough for a photo. It was intriguing to watch them hunt - pouncing into the grass tufts and digging down into the ground. 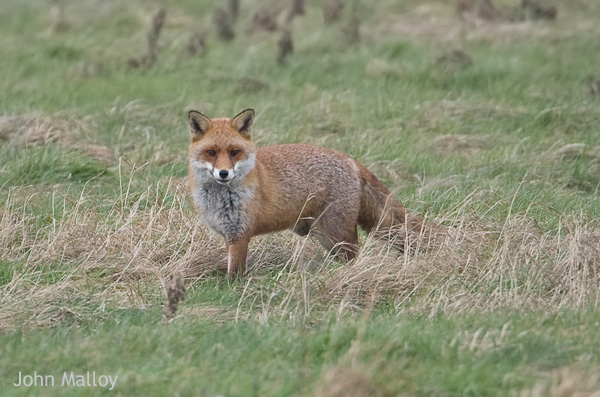 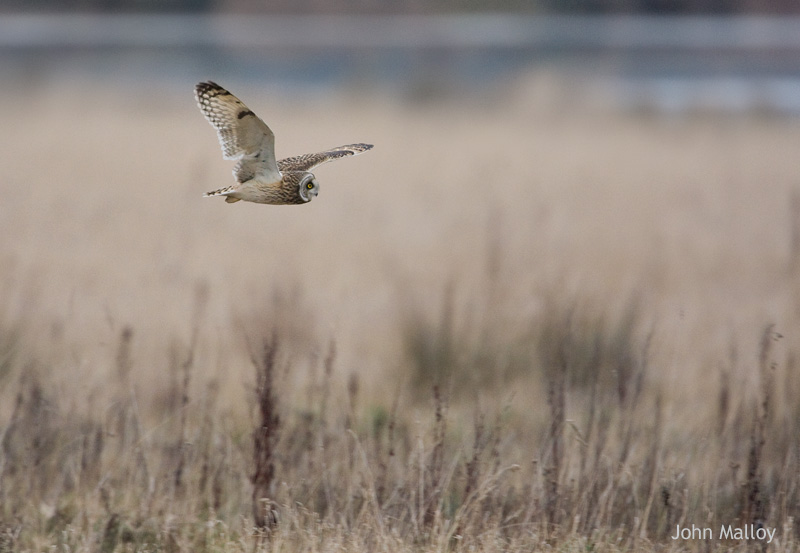 After an unsuccessful attempt at the Bassington green woodpecker a cycle ride late afternoon was more rewarding with a minimum of five short-eared owl up together, including some close fly pasts and some sparring. No slr camera due to icy conditions so picture appended is from my phone - an "arty" short-eared gliding through the sunset...

Also seen - couple of snipe, great spotted woodpecker, reed bunting, and on the way back, another short-eared owl towards East Hartford. Number six? 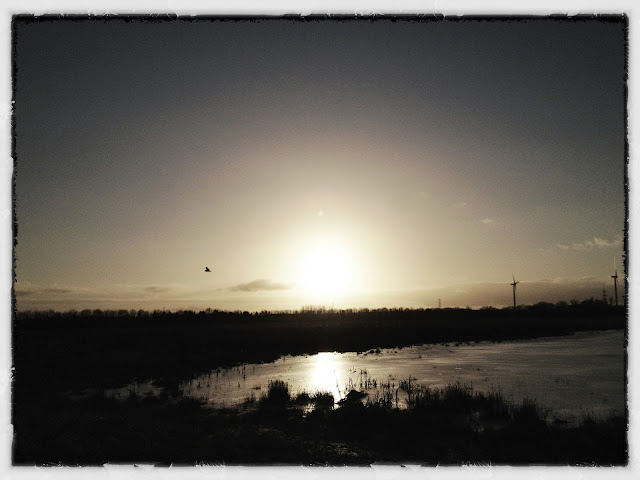 Late afternoon at West Hartford was rewarding, with four (possibly five) short-eared owl patrolling the fields. A couple of hundred lapwing were on the pool plus approx 35 teal and a mallard. A single jay and grey heron flew along the back woods. A kestrel dropped in to devour its prey - using the tops of the brick building as its "table". Horton Burn was unusually quiet, with nothing of note.
Posted by John Malloy at 19:59 No comments: