With continued reports of storm petrel off the north-east coast I headed back out today, arriving at Hartley just before 16:00.

Took a gamble with the location, but I figured that birds being reported off St Mary's and Seaton Sluice could be picked up from the cliff top inbetween...

Indeed they were, with the scope fixed above a feeding party of guillemot the first flew into view, and one and a half hours later a minimum of 17 had moved through. One bird lingered throughout, feeding between fishermens marker flags, while one scope view contained three. Result!

Otherwise it was quiet - six manx shearwater headed north, a small party of common scoter too. Kittiwake were numerous as were gannet. Again no skua sp., two red-throated diver...
Posted by John Malloy at 19:49 No comments:

A drive up the coast this afternoon saw me park up at Snab Point, just south of Cresswell. News from earlier in the day has suggested that there could be stuff worth seeing, and indeed my two and three quarter hour visit was moderately successful, particularly as I could sea-watch from the relative comfort of my car.

So, the main quarry - that's the "2" reference; with two storm petrel - the first at 15:11, drifting north ~ not the best view as it fluttered between the wave troughs, but suffice to remind me how small a species it is! The second was picked up at 15:52, this time a few meters closer to shore and a more prolonged view over the top of the impressive breaking waves. A result, especially when I consider that the last time I saw this species was in 1989!!!. Better numbers had been reported in the morning from nearby Newbiggin, but I shall not complain.

4 ~ the number of drake velvet scoter noted - all flying north, with two of them immediately following the stomies.

10 ~ manx shearwater. I had expected to pick more of these but they were sufficiently scarce this afternoon. Although not as scarce as any skua sp. - not a sniff of any!

Otherwise there was a steady stream of gannet, kittiwake, commic terns, sandwich tern along with guillemot and an occasional razorbill and red-throated diver.... all rather pleasant.
Posted by John Malloy at 17:43 No comments:

A sunny afternoon saw me head north to Hauxley, where I stood on the reserve perimeter not hearing or seeing what I had intended to see. Or hear.

Compensation was in the form of a sleepy 2s spoonbill that arrived on the seaward pool. It only raised its' head once as the resident grey-lag geese paraded past ~ suprising how "small" spoonbill are when you see the two species side by side. 1 bar-tailed godwit and three whimbrel were also noted on this rather lazy visit.
Posted by John Malloy at 19:13 No comments: 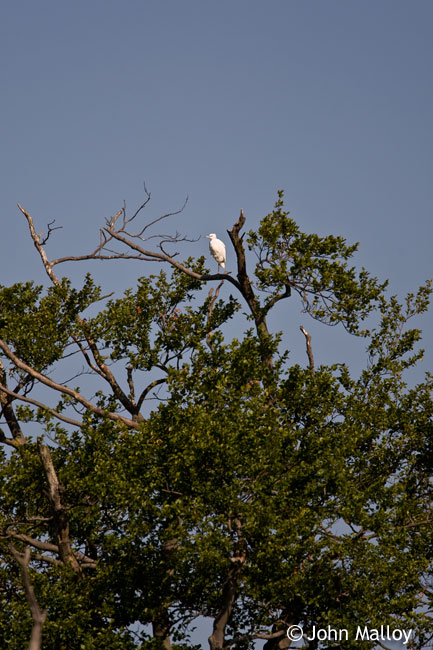 As rare as a "Turkish Robin" (it still huts), here's a blog update. Basically work has predominated June so birding has been very limited - and in fashon true to form the birding pace has weakend with all the migrants settling to breed. West Hartford has been visited but there is nothing to report! Arcot this morning was better, with me finally making the effort to "twitch" a Cramlington rarity - Phil had found this little egret earlier in the week ~ and it looks rather settled this morning, roosting and observing from the trees in the south west corner of the pool.
The water levels here are decreasing, so waders could be a real possibility later in July...
Posted by John Malloy at 11:23 No comments: