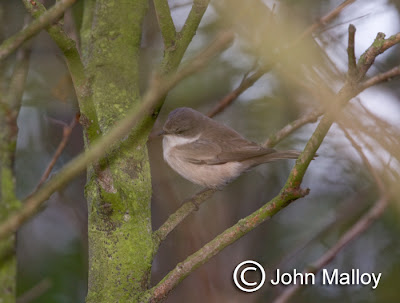 Visited St Mary's again today after news of a central asian lesser whitethroat was released on the pager.

This presumed halimodendri individual was very mobile and ended up spending most of its' time feeding high up in the willows at the north end of the wetland. The image here was taken late afternoon - 17:30 ~ 17:50 ish, and when natural light was extremely poor.

Camera focus was done manually and fill flash was used - without which I would have got no record at all.

There has been very little photoshop work in these images in an attempt to keep the as shot details of plumage as accurate as possible.

Hopefully the bird will stick and give another opportunity to get usable images...
Birding World has a good article on this form in volume 14 number 1 (January 2001 review). The bird here at St Mary's seems to match the bird in Sweden that was discussed, with reddish tone to mantle and rump, and hind-crown. Ear coverts grayish, slightly darker than crown, narrow white crescent under eye and dark lores. The bird did call once in my 4 hours spent at the site - a single high pitch "che".

If time permits and better images are not obtained, I'll post some more from this late afternoon session ...