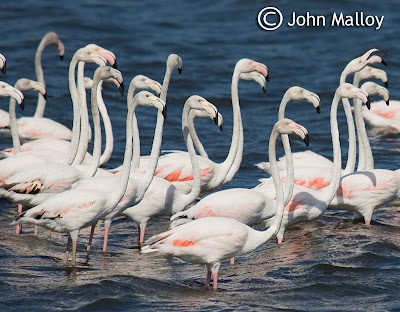 Greater Flamingo - large flocks present, no lesser flamingo picked up though...
We ended our trip out on 31st December 2009 at the un-touristy location of Strandfontein sewage works (!). Our driver had been a little doubtful of my request earlier in the day ("are you serious??"), but as traffic was quieter than expected we could afford a very quick visit. We approached from Muizenberg and headed along the impressive beach hugging R310 east to the M17 - loads of cape gull flew over the car as we approached. The sea in False Bay had some great crashing waves.

After our sign-in at the Zeekoevlei check point we headed south into the complex, picking up great white pelican immediately. Good start! 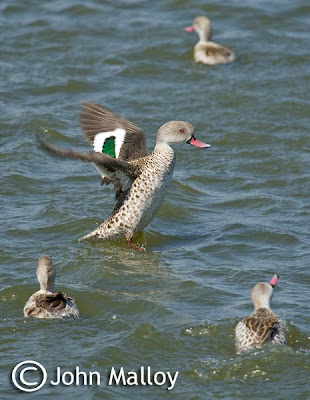 Cape Teal
At the "pan", greater flamingo were very numerous and provided a great show for my non-birding companions (despite the stink of the sewage works!).

The pools were also very well stocked with wildfowl, and it was tick after tick for me, with cape teal, red-billed teal, cape shoveler, maccoa duck, red-knobbed coot and on the reed fringed edges, levaillant's cisticola were readily available. 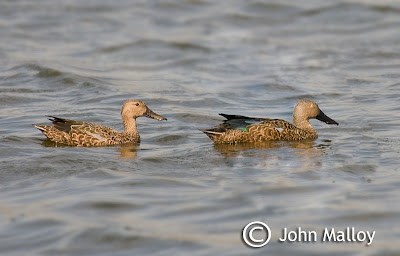 Cape Shoveler (drake on right, note his yellow eye!)
The supporting cast wasn't bad either - a big flock of blacksmith plover loitered on the roadside, while hadeda ibis, glossy ibis, african sacred ibis and little & cattle egret scattered from roadside ditches as the car drifted past. An african marsh harrier quartered the pools, with black-crowned night heron, grey heron, black-headed heron, african purple swamphen, black-winged stilt and avocet plodded round the pool edges. Black-necked grebe were very numerous (I've never seen so many together before), with lesser numbers of great-crested and little grebe in support. This was truly amazing!! 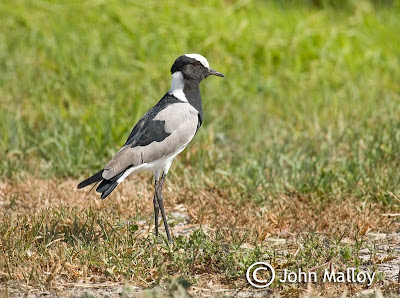 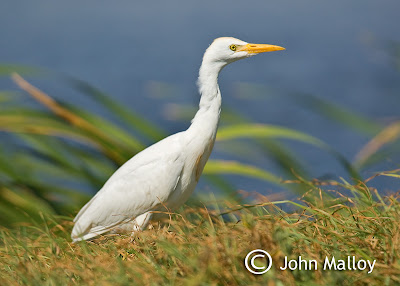 Barn swallow and white-throated swallow hawked over the pools and pied crow were numerous too.
As previously mentioned in this post, it was a quick visit - certainly no more than 40 minutes... I could have easily spent a full day here... the Southern African Birdfinder book states that on a summer day 80 species are easily available at this site, while the record by the authors stands at 118... in one morning!!!.
We left picking up a modest 33 species from the car, 10 of which were brand new species for me... extremely rewarding, and perhaps a timely reminder for me to book a hire car in advance of a trip - I could have seen much more had I booked...
So that was the end of our tour, it was back into Cape Town for the New Year celebrations and some nice red wine!