Not much to report...

It was a relaxed day as the last of my 2009 "flexible" holiday was taken - a frightening thought as another year passes.

A potter up to Druridge Bay revealed very little - the north end of Cresswell Pond was busy with curlew, lapwing, wigeon and grey-lag geese, while East Chevington was rather desolate. Nearer home, West Hartford was also rather quiet, with two stonechat patrolling the field and a few common and black headed gull on the pool. No owls... yet. The Horton Burn held one kingfisher ~ a colourful end to a relatively quiet, dull day!

Hope to get out on Saturday morning...
Posted by John Malloy at 21:50 No comments: 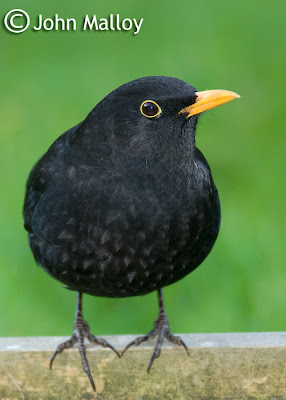 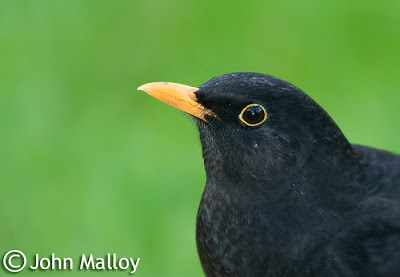 There's a nice interview with Tim Cleeves on the 10,000 birds blog today ~ infomation on the search for slender-billed curlew.
Posted by John Malloy at 16:34 No comments: 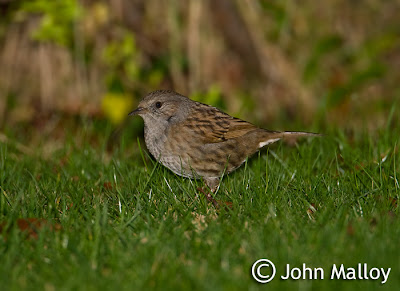 Back on early shift this week, but given the time of year there is not too much time to get out birding mid-week. So here is a stop-gap image. I fear I'll resort to editing old holiday images soon!

Three of this subtle species are visiting the garden feeders at the moment.
Posted by John Malloy at 16:16 2 comments:

Email ThisBlogThis!Share to TwitterShare to FacebookShare to Pinterest
Labels: Dunnock 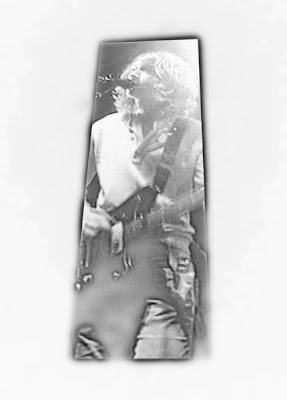 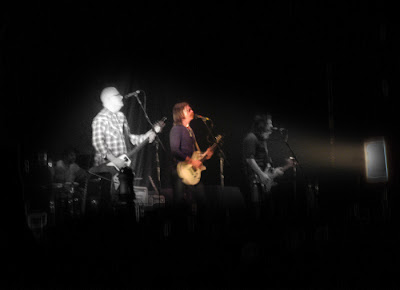 Four weeks out of the last five have been spent on nightshift, so birding has been restricted to weekends. This forthcoming weekend does not look to good weather wise, so maybe I'll have to content myself to some rest, relaxation and bass.
Photographically it's been a good week with October radde's warbler, glossy ibis and sabine's gull images being published in Birdwatch, Birdwatching and Birding World magazines. They may turn out to be my last published until the spring migration commences!... although recent Decembers' have produced some quality birds.
While I was at work on Monday, Mrs Birdingsometimes had the pleasure of watching Arctic Monkeys / Eagles of Death Metal (photographs above) at the arena in Newcastle. Check out the EODM flying V guitar!
Posted by John Malloy at 18:32 2 comments:

Three dips and a BG 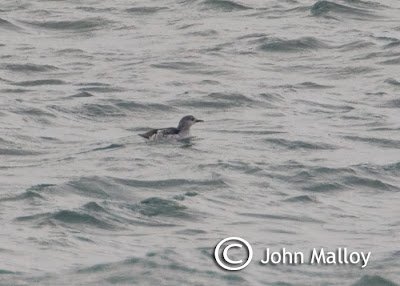 The plan was quite simple for Saturday morning - head up early morning to Holy Island, tick off the red-rumped swallow in the village and then have leisurely potter to the Lough for crippling views of the male bearded tit. We'd then head for Budle to take in the snow goose before heading to Stag Rocks for coffee and a sea watch.
That was the plan.
The reality was slightly different. Route was accomplished bar all the birds listed above!
No sign of the red-rump in the village from first light, and a walk to the Lough only provided a few mute swan and bathing herring gull. Tides were unfavourable so we had to bee off island by mid morning, and our stops along Budle Bay only provided barnacle and grey-lag geese. Maybe the snow goose is back with the others at Fenham-le-moor ;-)
Stag Rocks was a little better with the black guillemot detectable by binocular, and photographed (albeit very badly) with the 1.4 and 2.0 extenders stacked onto the 500mm. While we were watching the bg a kingfisher flew north, over the "stag" rock and round into Budle Bay. Half a dozen long-tailed duck were also present, along with red-throated diver, shag and eider. Could not see any slavonian grebe...
Posted by John Malloy at 17:27 No comments:

Another week of nightshift over celebrated with a mid afternoon visit to West Hartford. Rather quiet, with eight meadow pipit, two kestrel, bullfinch, three robin and a male stonechat. No owl activity, but I may have been a bit early.

Holy Island has hit the jackpot with a red-rumped swallow arriving today ~ I've already planned a visit there tomorrow (to try for the beardy) so hopefully both will linger.
Posted by John Malloy at 15:22 No comments: 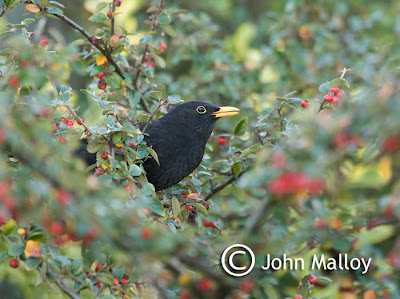 It's hard to believe that a year has now passed since the two-barred crossbill was a Stokesly, North Yorkshire. Mark & I spent four hours in the damp and cold waiting for the male bird to drop into it's chosen garden to feed on a peanut feeder. Roll on one year, and another morning has been spent photographing garden birds - this time in Northumberland and of a more common variety - blackbirds. Their numbers have increased over the past few weeks, no doubt boosted in number by continental birds set to winter. 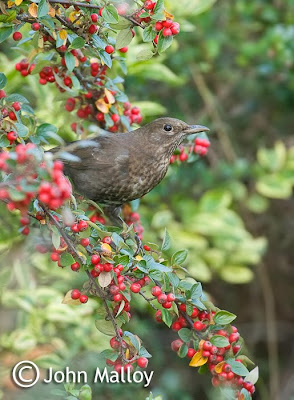 Had to use fill flash as the chosen "feeding station" was in deep shade. Lens was the 100-400mm handheld.
Posted by John Malloy at 12:56 No comments:

News that the sabine's gull had me back out to the rather cold fish quay at North Shields this afternoon. Again it was a sabine-less visit, however a very late juvenile arctic tern was a surprise as it flew up-stream.

A close look at the juv greater black backed gulls revealed one with its legs tangled in fishing line and one foot missing. Nice.
Posted by John Malloy at 17:11 No comments: 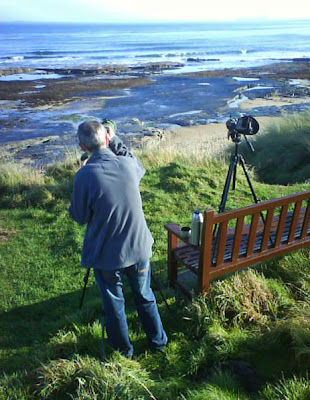 Started Saturday's birding at Stag Rocks with Mark. After several years of trying we finally connected with black guillemot - a county tick for us both, a species which has been a bit of a bogey until now. BG's winter on the Farne's in small numbers and occasionally can be scoped from Stag Rocks. Today we were very lucky, as a single bird was about 400m offshore. Also seen during the watch were several guillemot, a gannet, red-breasted merganser, three red-throated diver, eider, bar-tailed godwit, oystercatcher and redshank. Interestingly there were no scoter offshore.

Monks House pool had held a snow goose for the past couple of days, but there was no sign on Saturday morning, just a few grey lags with mallard, shoveler and many black-headed gull. We later learnt that the snow goose was at Budle... and we had headed back south, via Swinhoe and it's amusing signpost - 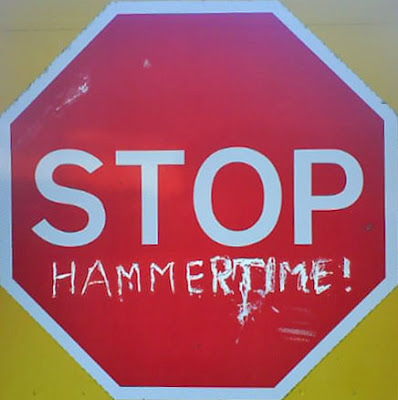 Our next stop was the Beehive flash where a pectoral sandpiper had been reported off and on for a couple of days. Initially there was no sign and it was not until we drove off that the pec was seen (from the moving car) sunbathing in the long grass on the northern edge of the pool, hence the quirky shot below. 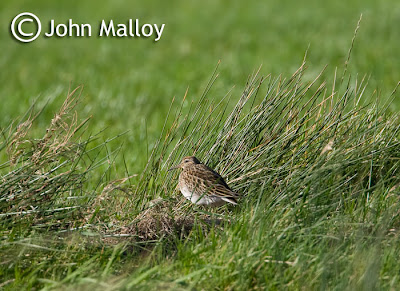 Next stop was the obligatory visit to the fish quay at North Shields for a nice portion of pie and chips, with a sab's on the side. Unfortunately for us, the pie and chips won the initial port of call, and after devouring them we discovered that the sabine's gull had been and gone while we were eating! This bird has lingered for a week now, but is becoming more mobile, spending time at both North Shields and South Shields. We had a check of Tynemouth Haven on route back home but there was no immediate sign.
My evening was spent back at the O2 Academy in Newcastle where Reverend and the Makers were performing. Pre-show was spent feeding up at the Canteen and Bar where a rather tasty steak and kidney pie was much enjoyed along with some rivot catcher beer. They were very good indeed, and with a Saturday 10pm curfew, continued their show (albeit Jon McClure and an acoustic guitar) in the car park adjacent to the venue! 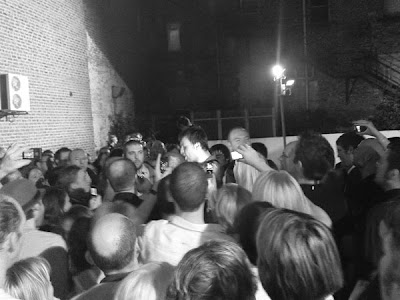 After the show I managed to see a further two species - insomnia-ridden black-headed gull feeding on Clayton Street, Newcastle at 23:00, and barn owl - sitting on a roadsign on the A1/A19 slip-road.
Posted by John Malloy at 16:35 2 comments: