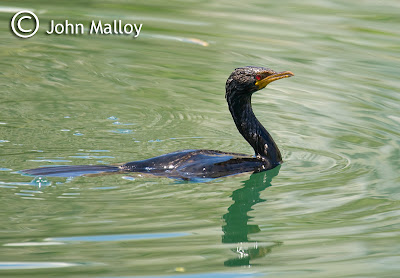 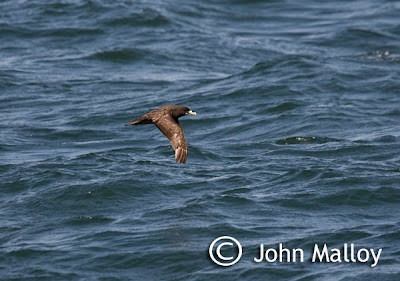 As I mentioned earlier some pre-booking of excursions would have been wise, as we were unable to get onto one of the Robben Island landings during our stay. As a compromise we took a "round the island" cruise on a rather smart catamaran. Highlight of the trip for me was the opportunity to see a few more bird species while taking in the views of Robben Island and Cape Town/Table Mountain.
In the Victoria and Alfred harbour hartlaub's gull, cape gull and swift tern dominated the proceedings, while offshore the birding got a bit more interesting.
My first african penguin encounter was relatively quick into the journey, with many parties noted throughout. Cormorant species were also available - teams of cape cormorant flew by, with lesser numbers of crowned and bank cormorant noted. Flocks of african sacred ibis commuted between the mainland and the island, I assume there is good feeding to be had there.
Rounding the island our boat put up a single white-chinned petrel - a few record shots were rattled off... and it was not to long after that when the first cape gannet appeared.
Arctic skua and common tern were reminders of home, although the warm blustery conditions were not!