Despite having some time off work, and the availability of 2 significant UK "ticks" in, er, the UK ... I haven't ventured far at all - in fact it's all been done on the bike round the doors.
Waxwing were a bonus on Christmas Day - with six on Horton Drive in the morning, then later outside the house in what seems to be a favoured tree.
Greater black backed gull have been more numerous than other times (and can actually be tricky in Cramlington), while the resident lesser black back is still at the other end of town.
Today's venture took me to he usual sites, with kingfisher and 2 grey wagtail on the burn (no little egret - good reports of one yesterday morning), a jack snipe, two coveys of grey partridge and, almost as darkness closed in, a short-eared owl and fox combo - quality on the door step.
Onwards to 14 - 13 provided two UK ticks (both in county too - bridled tern and ivory gulls!), plus approx 8 new for the county list, including a long awaited catch up with purple heron and the unprecedented male collared flycatcher. I think it goes without saying that Northumberland has been quality in 2013... (Not forgetting Cramlington - a blissful year if ever there was one - refer to Gordon's blog for more of that - great to see a team effort with Phil, Steve, Dee and Lindsay producing a record parish haul).
Trips away have been limited, with Speyside featuring strongly in the great weekend category - together with Mark, John B, Rob and Ian we had a clean sweep from beginning to end - surf scoter, king eider and white billed diver en route to the "starting point" of the trip was superb - I look forward to our next weekend, not to long to wait for that ...
Posted by John Malloy at 17:32 No comments:

The reality of dark winter afternoons

After the madness of the Seahouses Ivory Gull fest, it's been a week of nightshift for me. Birding has been restricted to a daylight journey home from work today - with a female Merlin near Northumberlandia (Cramlington year tick) and a cycle later as dusk fell - West Hartford producing c20 teal, c30 lapwing and a smattering of pre roost gulls - bh, h and c.

The Horton Burn was traversed east to west on the way back and prove to be worthwhile with my first kingfisher of the winter near the middle bridge. 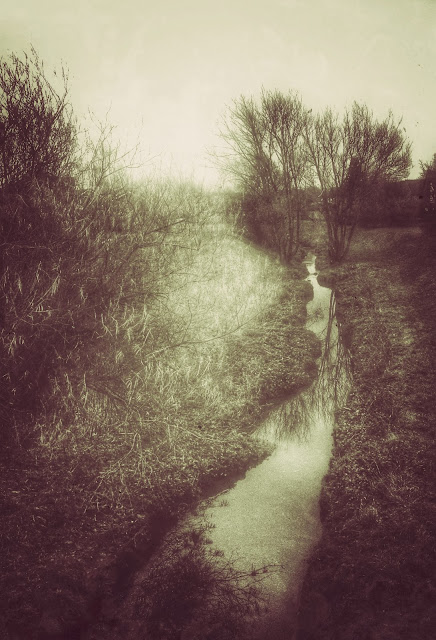 Yesterday afternoon was surreal... I think there will be much recollection over the next few years of the "there's two!" moment...

Today I was at work in the morning, as was disappointed to hear that there (to date) not been any further sightings. There is no doubt that they could reappear (I think the Ayrshire bird went AWOL a few years back, reappearing on farmland a few days later).

I ended the last post with a prediction of sorts. Bizarrely it came true...

12:16 on a quiet Saturday, lunch consumed and a casual glance at the phone. Message from Gary. 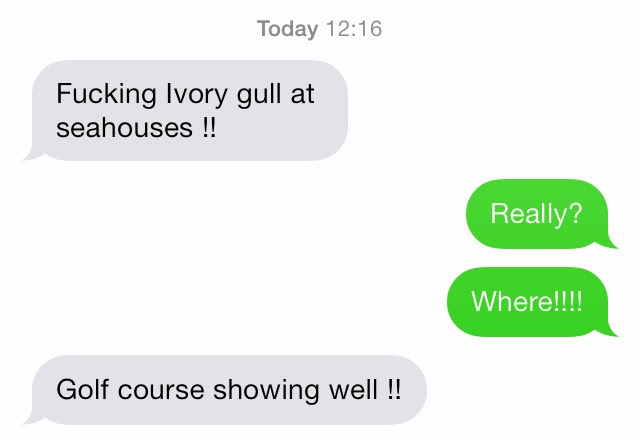 An hour later and I'm there... a UK/world tick for me, and weirdly, not quite as expected... a second 1st winter appeared as the bird flew over our heads off out to the beach!

The last Northumberland bird was December 1979, so a catch up for many in the county. 2013 has been a belter year in Northumberland. 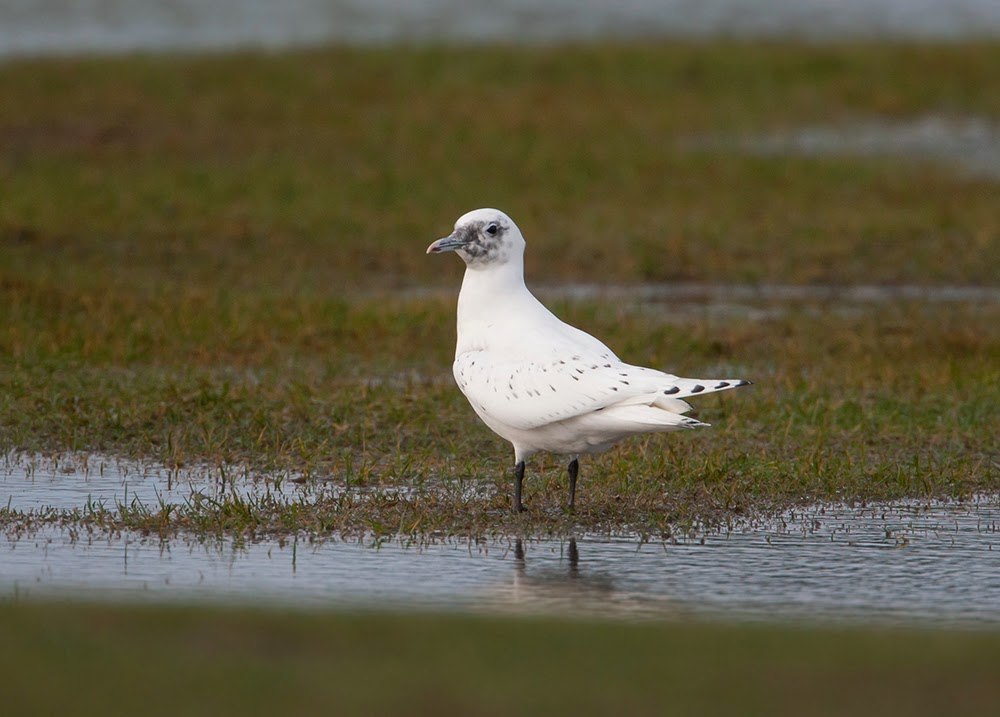 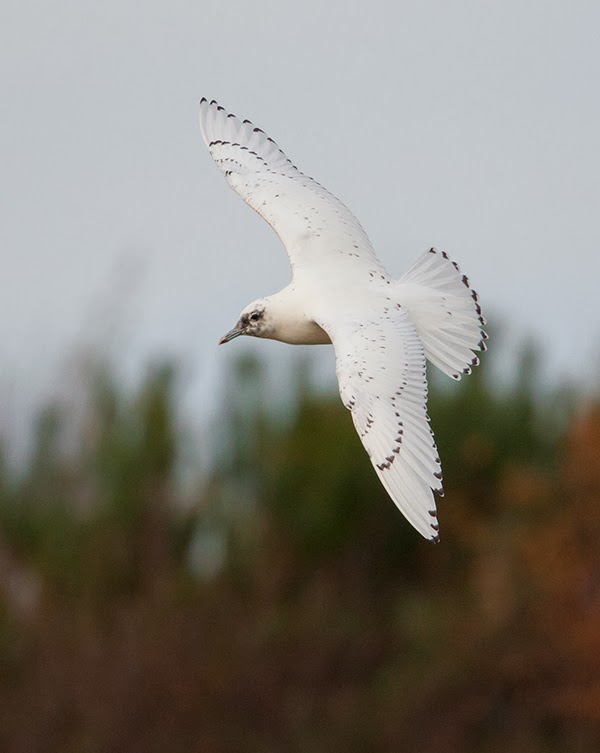 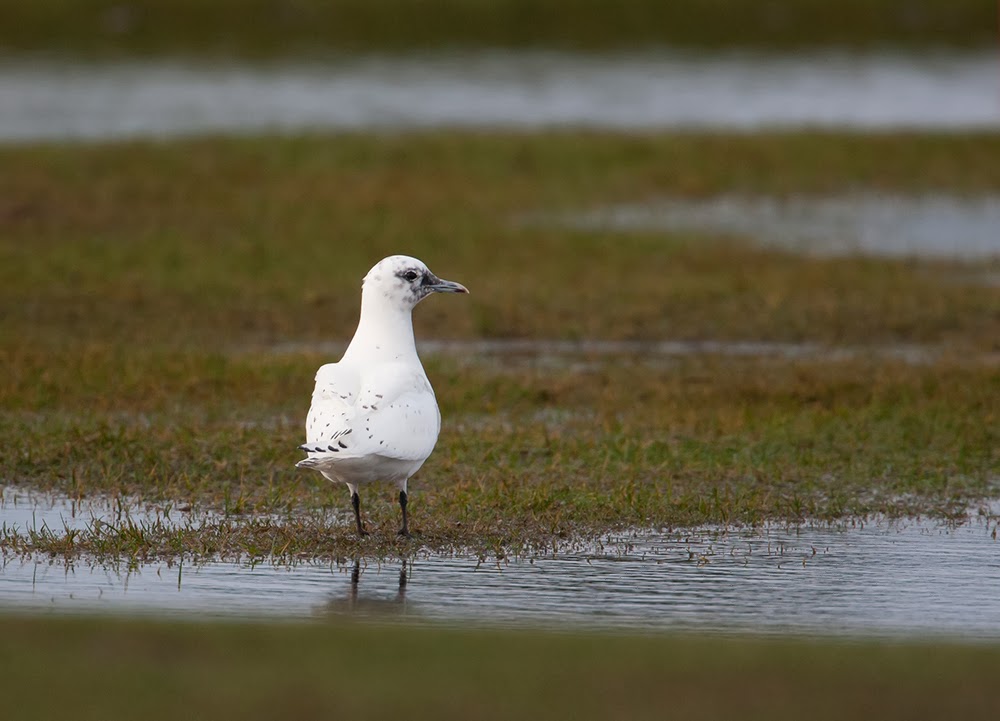 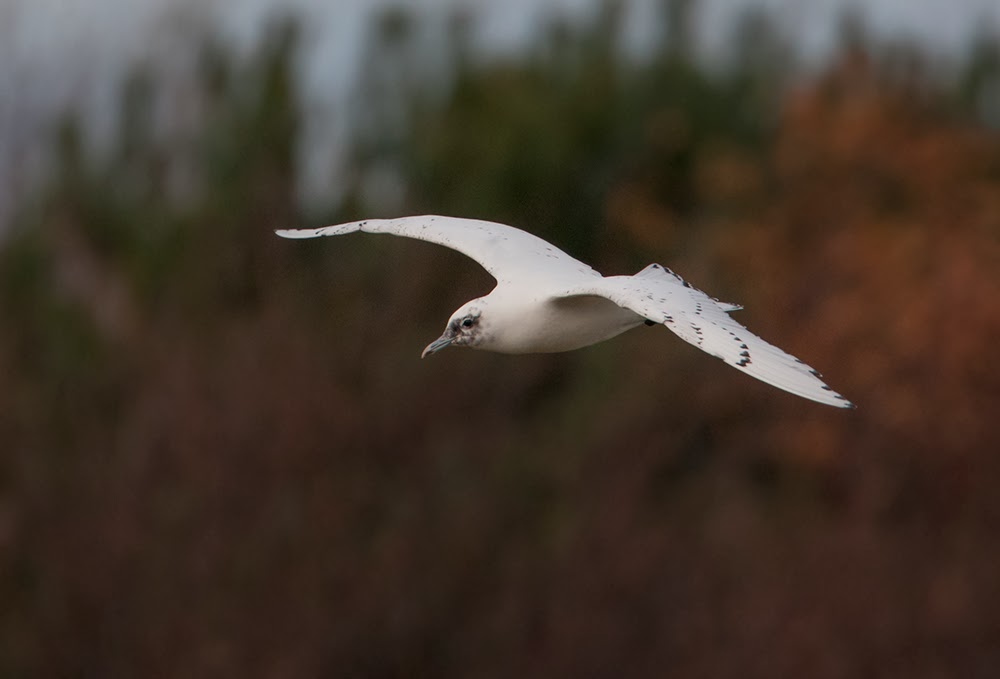 Doubtless more images to follow in a day or two... I need a moment or two to take this all in!

In addition to the Ivory Gulls - peregrine and woodcock

Not too much to see in Druridge Bay this morning - the blue skies were brief as cloud covered by midday. Black-necked grebe still floats about Cresswell, and red-throated diver aplenty off Druridge Dunes. News of a northward ivory gull in Durham raised pulses slightly, hopefully a pinned down individual will be subject of the next blog entry...
Posted by John Malloy at 14:36 No comments:

....Newton's second law of motion pertains to the behaviour of objects for which all existing forces are not balanced.

A week off work and glorious sunny late November day - too good to start any decorating, my "forces" were clearly not balanced today, so a wander (ah, motion) up the coast back to the Newton area for a walk, a bit of birding and a delicious crab cake or two at The Ship. All hardships...

No "proper" camera today, just the trusty iPhone for scenary  and for the lingering Lesser Grey Shrike, a scope too.

A busy weekend prevented a trip to the Newton area until today - thankfully the lesser grey shrike remains, albeit helped with mealworms. Temperatures are forecast to drop over the next few days, so it will be interesting see if the shrike moves on.

Always on view near the car park, but with a habit of sitting on the "wrong" side of the hedge between feeding forays, I had a bit of luck as the sun came out and foe once the shrike wasn't obscured by branches... 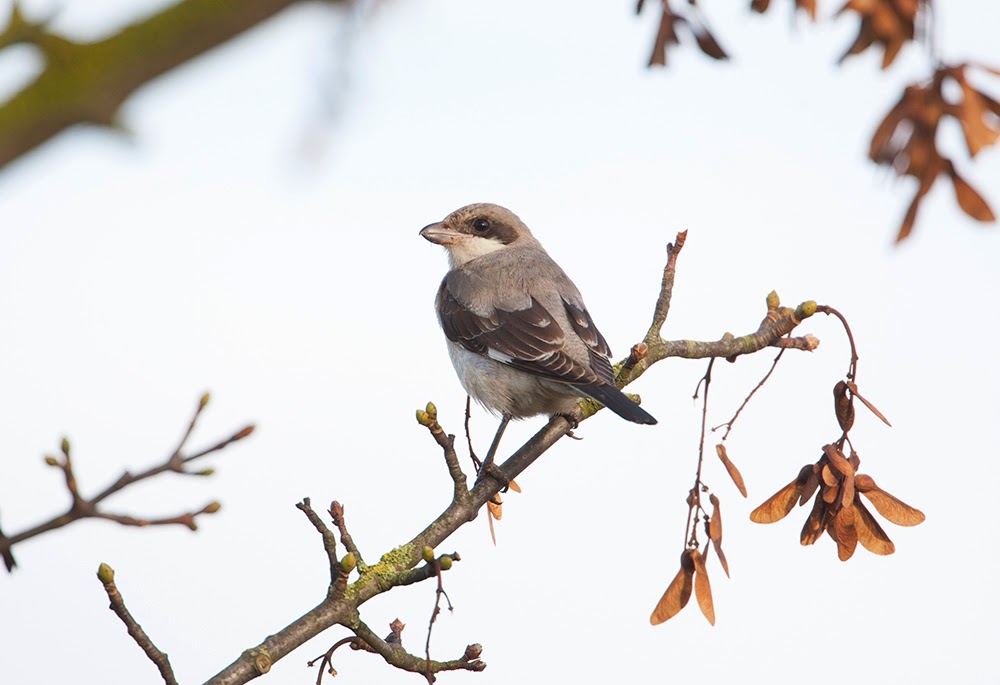 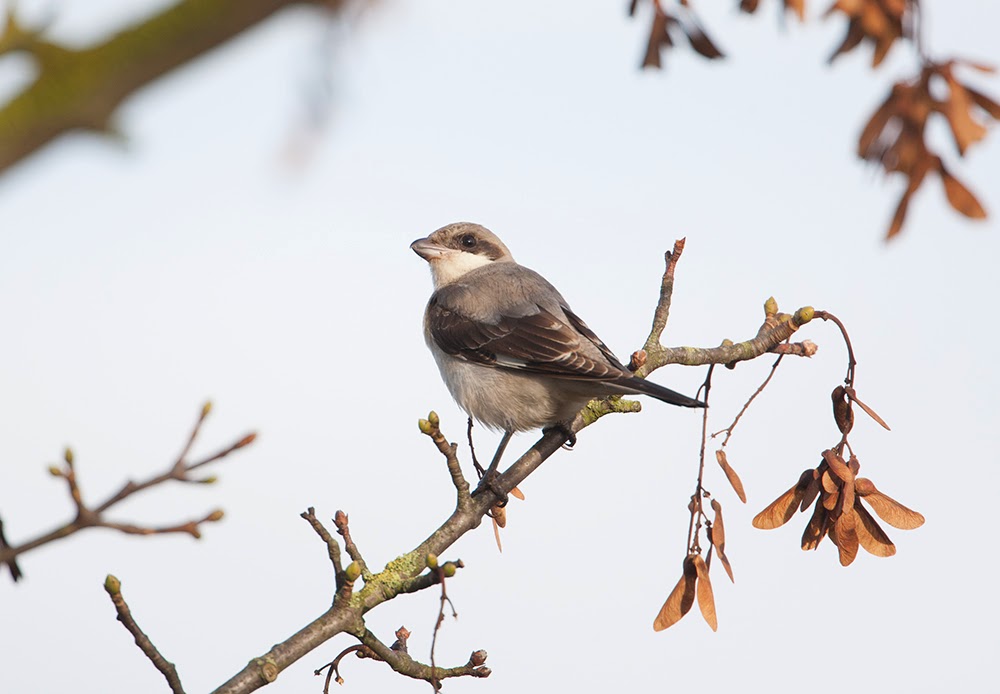 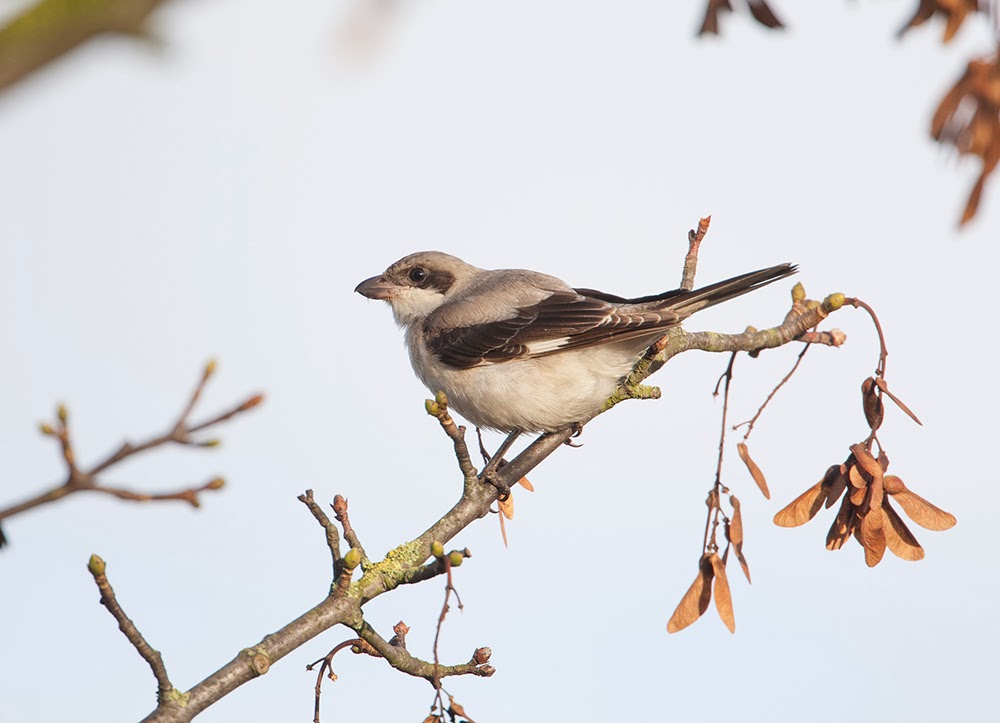 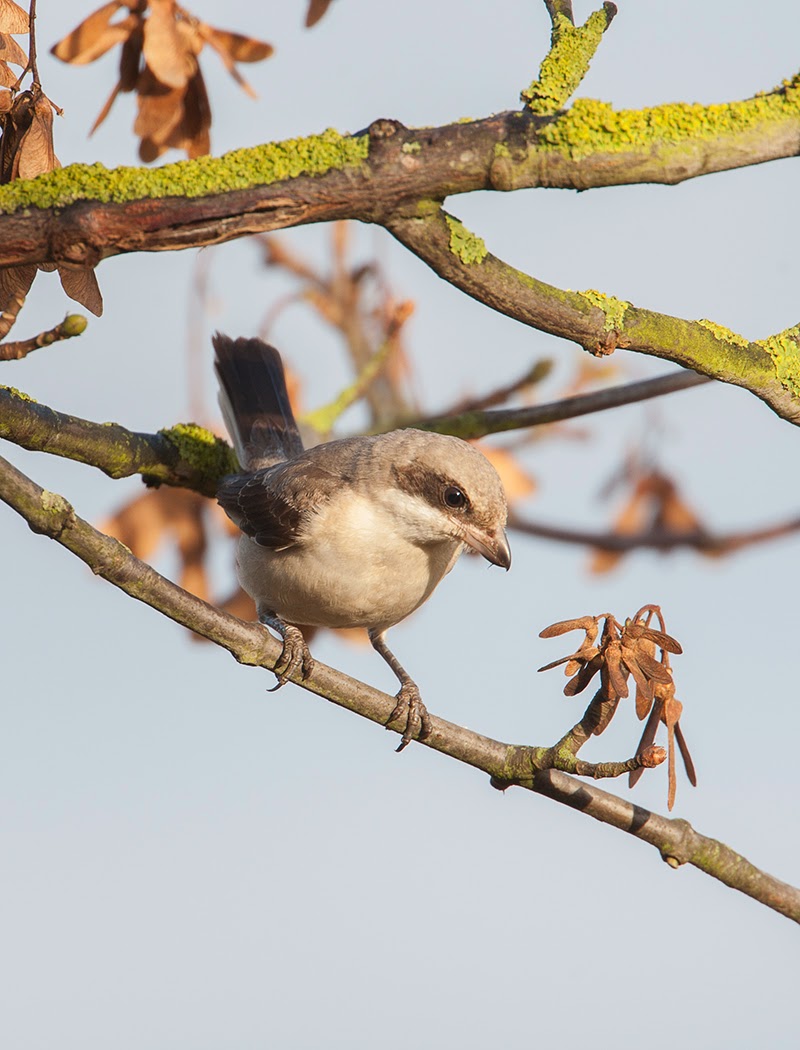 A little later, the shrike headed to a cattle feeder, so an atmospheric image to end: 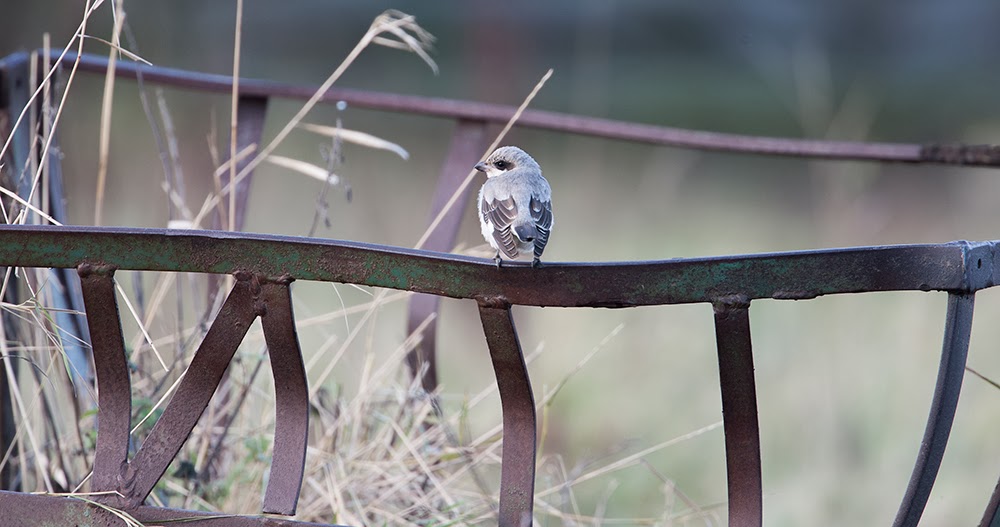 A mid afternoon vigil at West Hartford did not produce anything out of the ordinary, with a single stonechat being the highlight. Thrushes were represented by redwing, fieldfare and blackbird, while decent numbers of common, black-headed and herring gull frequented the hydrated flash. Most impressive were stock dove numbers with a couple of 10+ groups descending into the River Blyth bank side trees as darkness descended.
Owl-less tonight.
Posted by John Malloy at 17:51 No comments:

Little time for birding this past fortnight with nightshift and late shift at work - a week of earlies may grant some afternoon trips this coming week. Odd highlights have been 2 garden rares - don't get too excited, they consist of "in garden" song thrush and common gull! Collared dove have peaked 10 "in the garden at once" so needless to say the expense if seeds is increasing as the temperatures drop.
Of non-bird interest, but of digi-scoping maybe, here's an iPhone pic of tonight's moon - iPhone / 95mm Swarovski at 70x zoom. Not bad all considering. 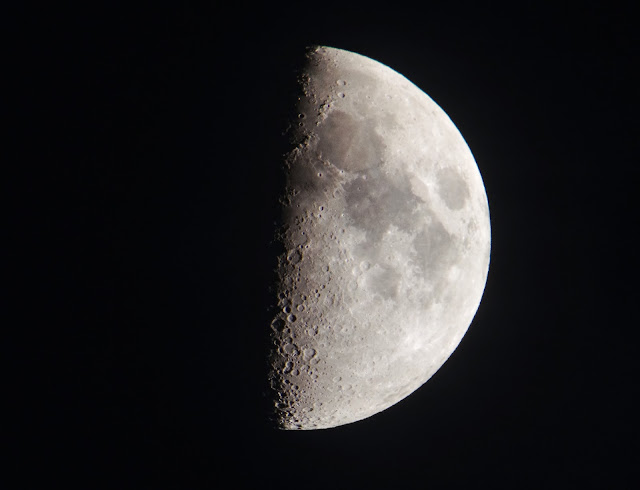 Email ThisBlogThis!Share to TwitterShare to FacebookShare to Pinterest
Labels: Moon

Another trip north to St Abbs Head with Mark and Phil - the frustration of the visit earlier in the month (where the Sardinian Warbler was only heard) and the fact that the bird was still getting reported almost 4 months after it was initially ringed... was too much.

We were rewarded with good weather and a quality couple of minutes decent viewing of this striking species... 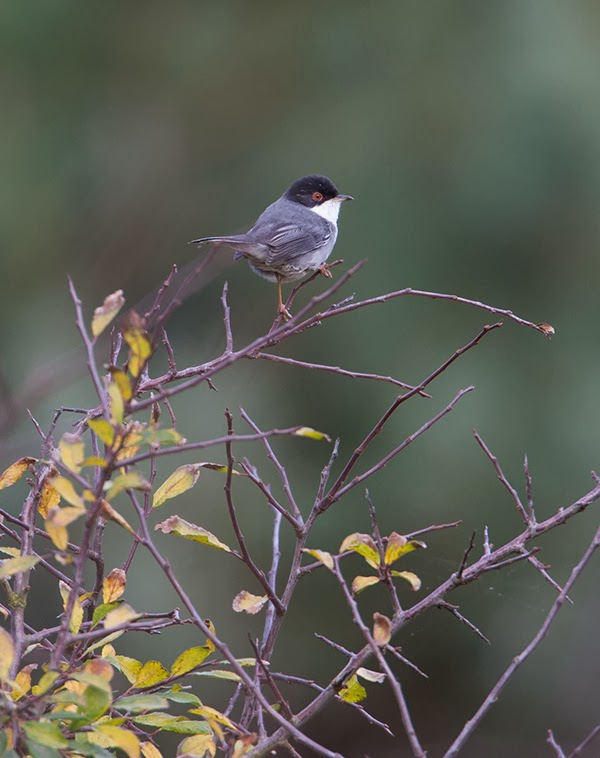 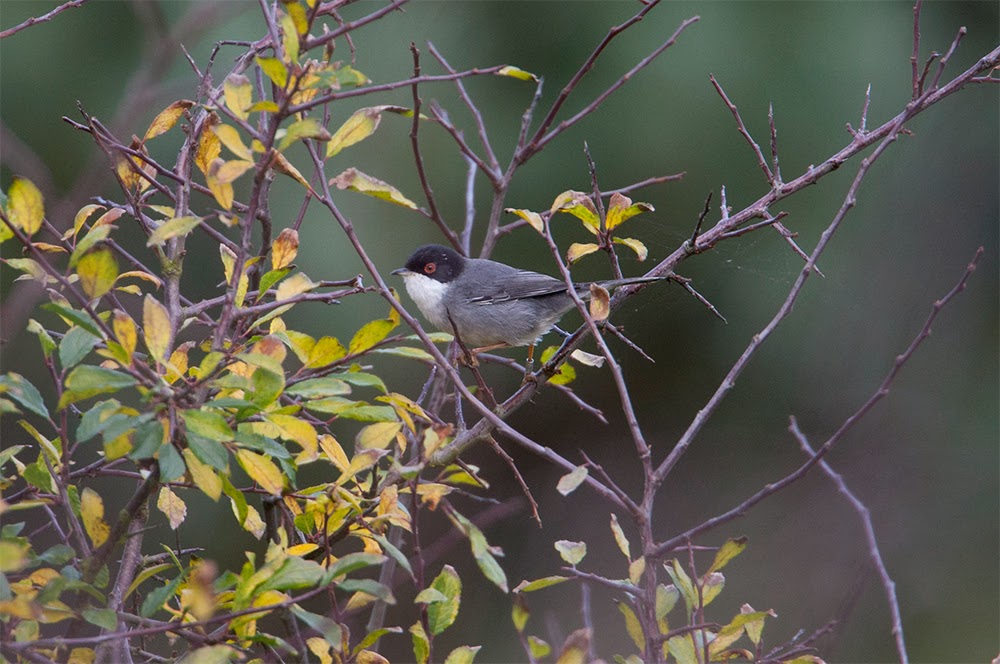 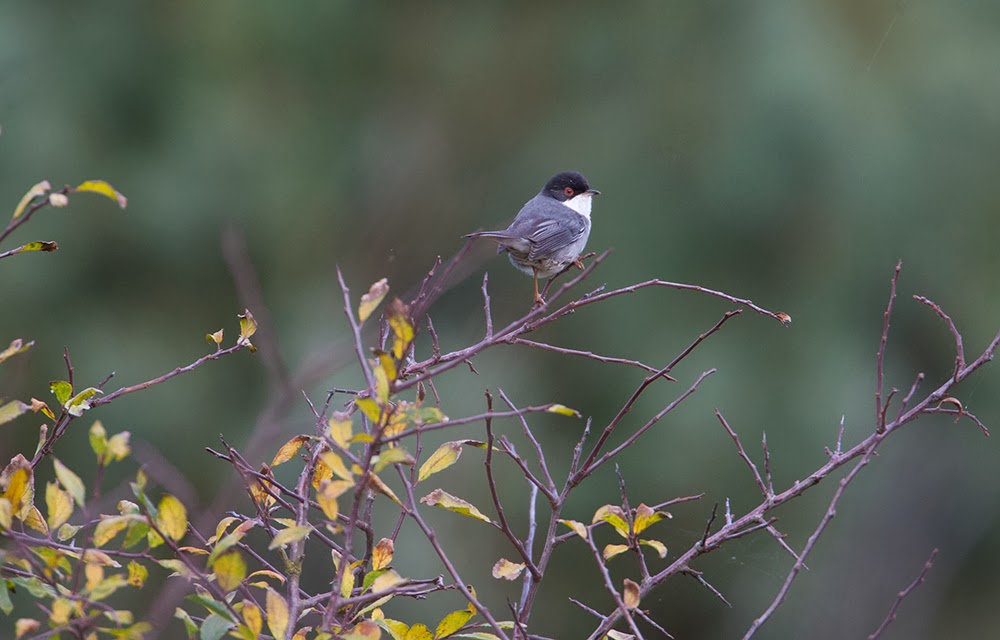 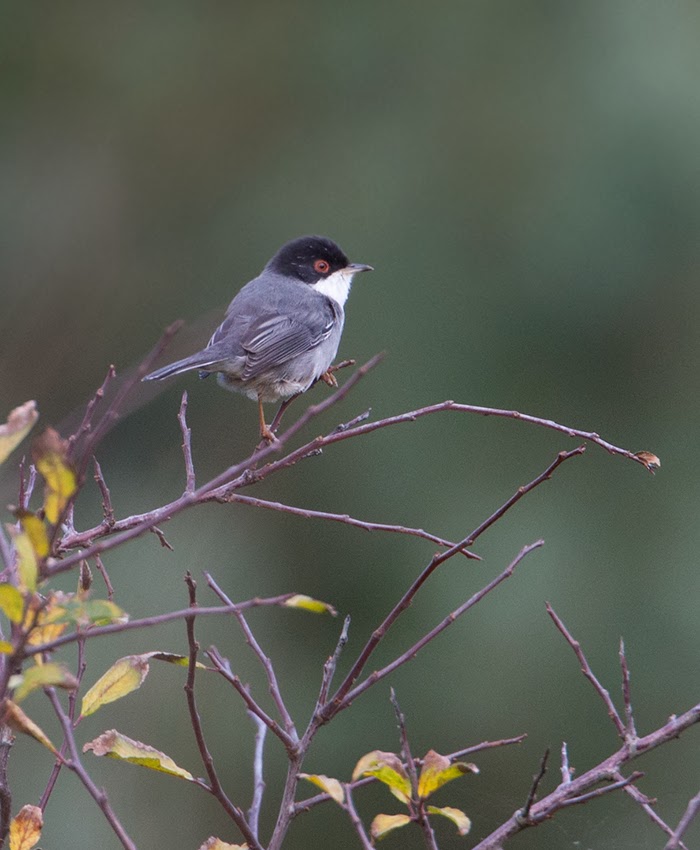 To top off the birding, the scenery up at St Abbs Head is stunning...


More of the same this afternoon, with a couple of hours at Marden Quarry - brief view of the Pallas's Warbler, prolonged views of Yellow-browed Warbler and Siberian Chiffchaff. Quite a trio of Sibes...

Prior to that, Arcot was twitched - Whooper Swans for the patch list courtesy GM.

Spent the afternoon at Marden Quarry, enjoying company with the Northumbrian elite ... the hoped for Pallas's Warbler did not materialise, and I didn't hear the Ring Ouzel call. However, some compensation with a Siberian Chiffchaff, dropping in briefly and calling late afternoon... record shot it is... 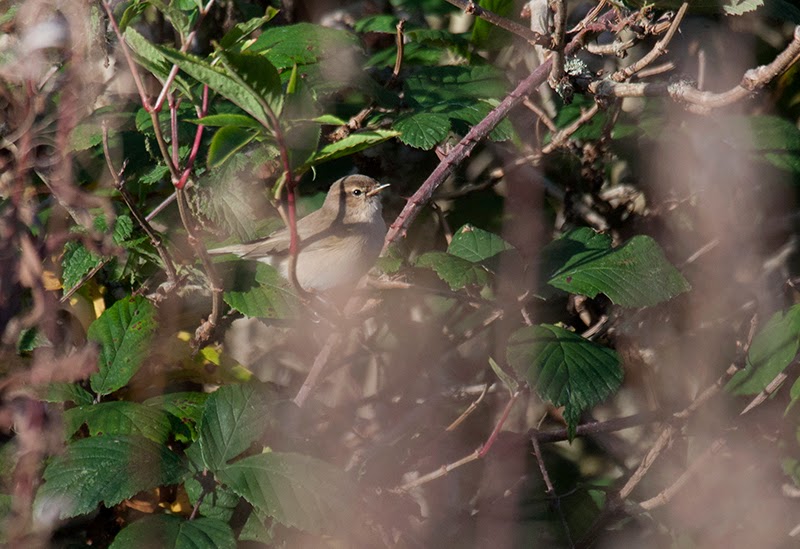 Headed north with Phil on another quest for a county tick or two - yesterdays news of a Siberian Stonechat just south of Howick came just too late to make use of accumulated brownie points, so a post work trip it was. 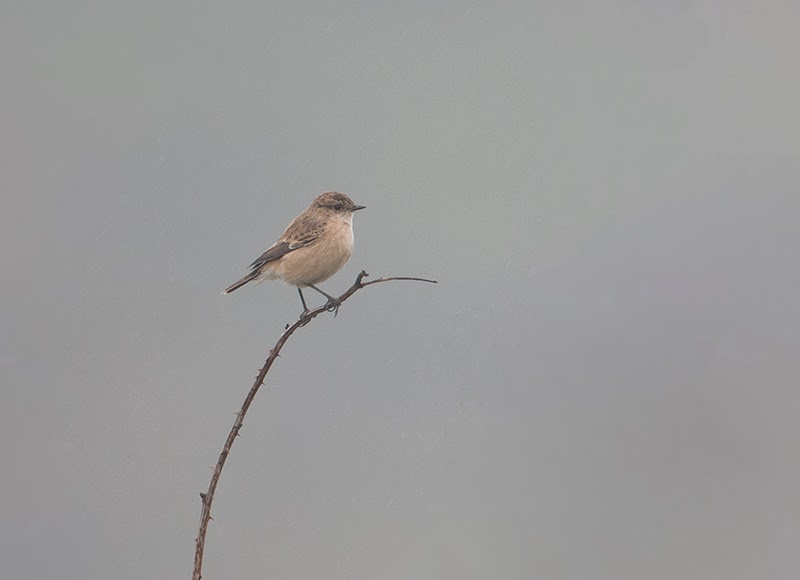 We arrived just as the heavens opened - and consequently continued for the whole two and a half hours in the field.

The sibe stonechat performed well, until it opted to retreat from the rain - so with a county tick under the belt we headed to Beadnell Bay, picking up a cracking and obliging Lapland Bunting on the track, but no hoped for Richard's Pipit - a species that seems destined not to make my county list! 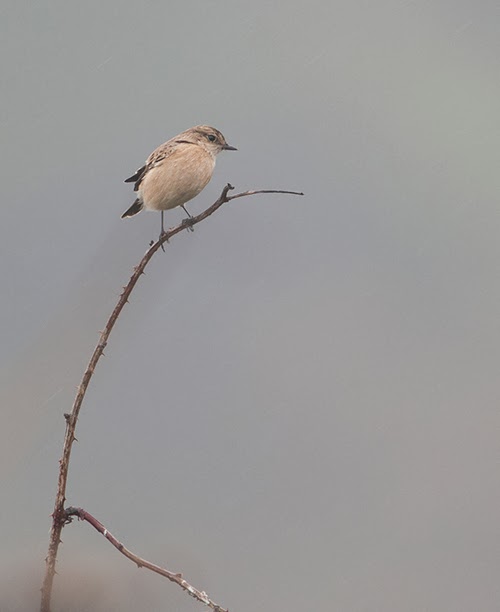 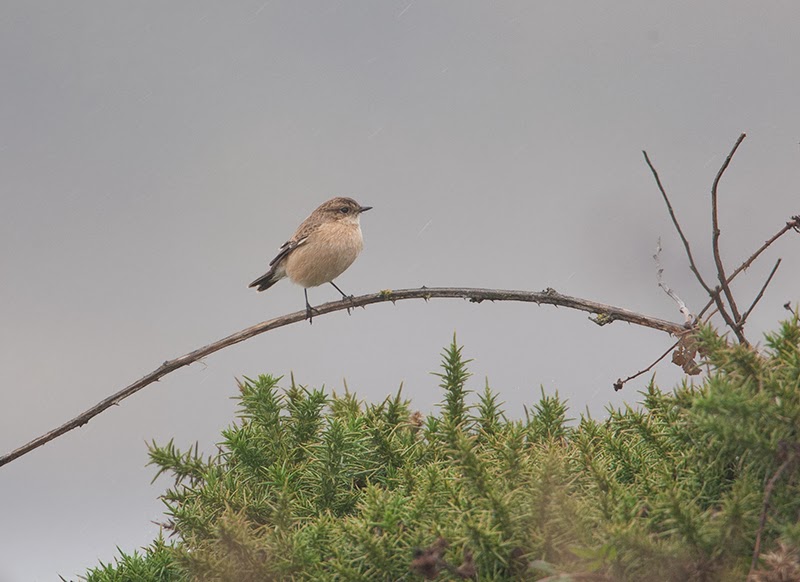 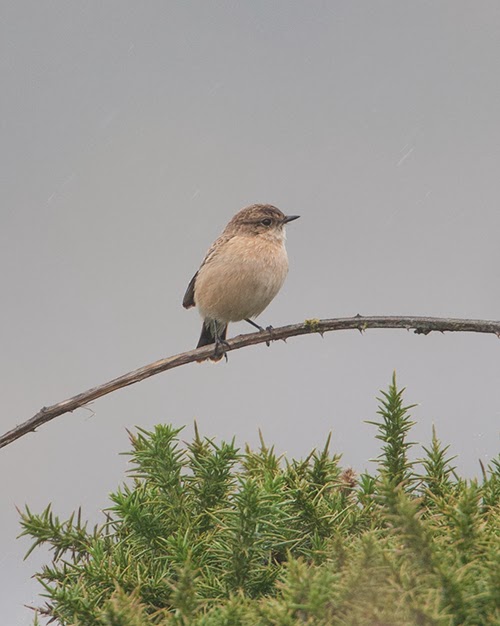 Woke up with a bit of a cold developing this morning - sufficient excuse not to do any exercise (again), but not enough to prevent a potter birding.

The excitement began at home, with a garden rare - male chaffinch!

At Prestwick Carr the great grey shrike was distant, but appreciated for the 2013 year list - no camera other than the iPhone, so some practice record shots - the shrike was approximately 400 yards away, so I'm quite happy with the result: 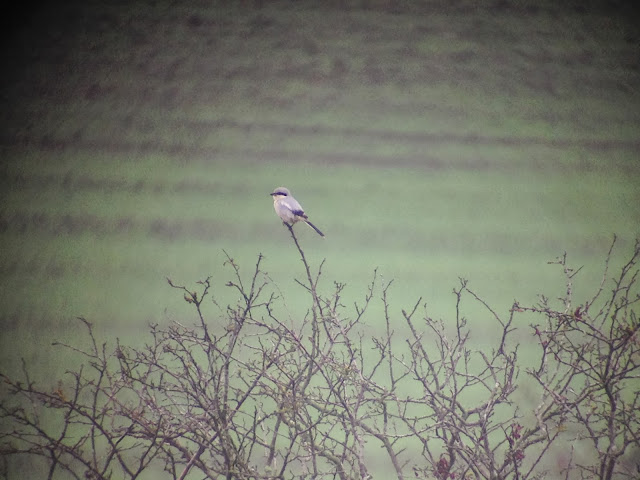 The excitement didn't end there, with willow tit also at Prestwick Carr, and a call in to West Hartford produced my first ever little egret on the patch... happy days
Posted by John Malloy at 13:01 No comments:

News of lingering Western Bonelli's Warbler and a re-confirmed Pallid Swift had Phil and I heading to Hartlepool this morning - a grey October day mean't poor conditions for photography ...


The WBW was seen quite quickly upon arrival (though Phil missed it) - so we opted to check out the pallid swift as reports suggested it was showing consistently - and it was, albeit against the overcast sky. Could have done with a visit on Thursday when the sun had been shining...


Back near the Borough Hall we finally got reasonable views of the western bonelli's... though nothing for the camera. Brambling, blackcap and chiffchaff added to the migration feel.

Not a bad late morning - early afternoon trip - both species were only my second encounter in the UK!

Looking we did, but it was more of a listen. Yellow-brows were heard frequently while traversing the west bank of the loch, and a firecrest joined in during the vigil.

We had one or two probable views, and frustratingly the bird started calling loudly from deep within the scrub mere meters from us...

Time beat us, and with a pitstop for a delightful quail & black pudding scotch egg, we headed back to the sanctuary and safety of Northumberland.

News of a sub-alpine warbler at Druridge brightened the end of another week of early shift - Phil and I arrived mid-afternoon in the mist and were rewarded with a fleeting glimpses in the buckthorns.

A little later the active warbler headed north up the dunes, and gave frustratingly obscured views in a lone hawthorn just off the old mining access road...


The good birding continues... it will be interesting to see what the weekend brings. Or not.