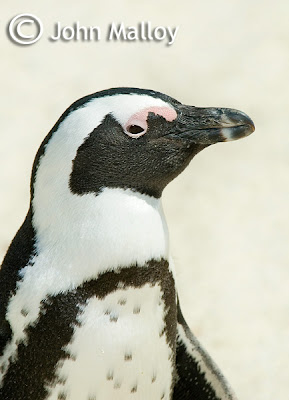 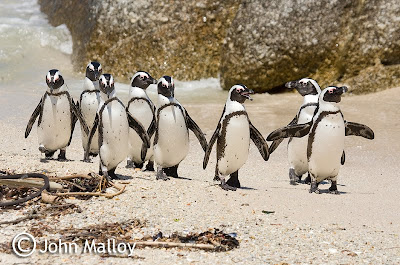 ... in from the sea
After a very nice lunch on the 31st December we headed to the famous african penguin colony at Boulders Beach, Simonstown.

This was a great experience, as the penguins were very, very close to the raised board-walk! 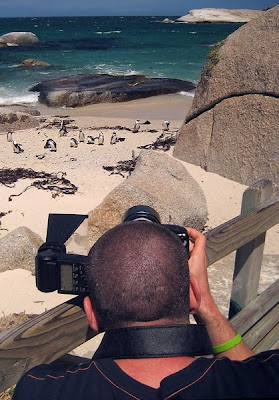 Great views from the boardwalk! (must remember to photoshop the grey hairs next time...) 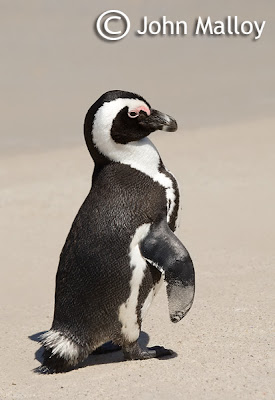 What characters these birds are, a real hit with the tourists, birders and non-birders alike. In fact, I'm betting that african penguin is Mrs Birdingsometimes' new favorite bird.
This site is the larger of two mainland colonies of this globally threatened penguin, with approximately 1,000 pairs. It's remarkable to think that the first pair only nested in 1985.
The bulk of the penguins were loafing about on the sandy beach and were occasionally joined by small groups returning from their fishing trips in False Bay.
Two blacksmith plover (love these!), a cape gull and hartlaub's gull were also present on the beach, while swift tern and common tern fished offshore.

With our fill of penguins we headed north towards Cape Town, passing through Fish Hoek and and Kalk Bay. False Bay has some beautiful beaches...

Next stop? Where else would you choose to take your missus and bemused driver on New Years' Eve afternoon....? At Strandfontein Sewage Works of course!!

Like the blog, keep up the good work! I was trying to find contact details but couldn't so I posted.

We have just finished a new site for use by the birding community:
www.birdingnews.co.uk
We are contacting a limited number of people that we hope will let us know what they think about it before we take it out of beta. If you could let me know what you think that would be great.

We also have an iPhone app out that can be used in conjunction with the site, you can find out more about the iPhone app here:
http://www.birdingnews.co.uk/iphone/

and this links through to the app in iTunes:
http://itunes.apple.com/WebObjects/MZStore.woa/wa/viewSoftware?id=348791972&mt=8