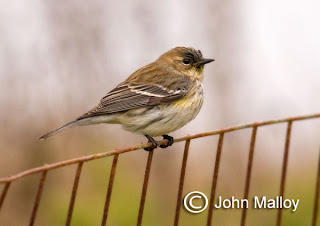 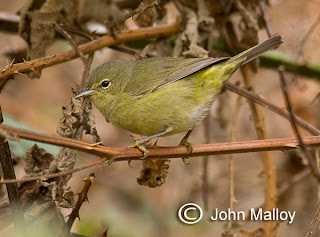 It was a return to cooler temperatures in San Francisco, our final destination of this trip. Featured here are two warbler species: yellow-rumped and orange crowned.
The yellow-rumped warbler was photographed at Crissy Fields, and was a common species in SF. A tricky species to photograph as they were very active feeding in the low coastal bushes - I struck lucky here when one bird landed on the fencing as I was waiting for a black phoebe to return.
The orange-crowned warbler was feeding under Fort Mason and was very inconspicuous. Not the best photograph as the light was poor in the undergrowth. Above us several red-masked parakeet were squabbling, quite a bizarre sight on a grey January morning!
Posted by John Malloy at 18:48