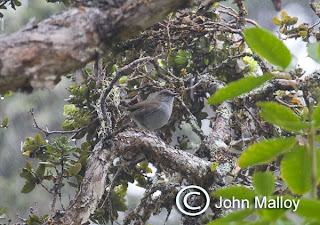 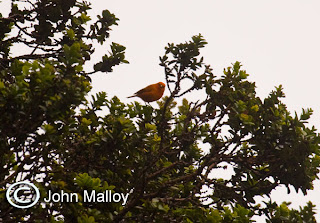 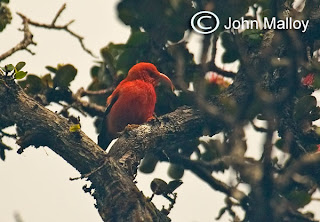 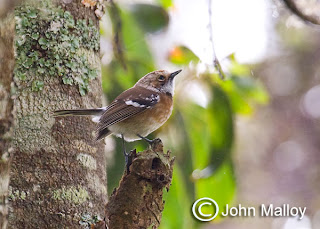 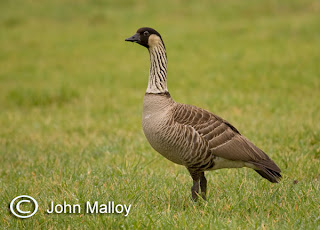 An early start saw us heading to Hakalau NWR on January 2nd, on a pre-booked forest tour with Hawaii Forest and Trail, our primary target species being the native forest endemics including Pueo, Io, Omao, Elepaio, Hawaii Amakihi, Akepa, Hawaii Creeper, Akiapolaau, Iiwi, and Apapane. Our guide for the day was Garry Dean who was extremely knowledgeable about the natural history of Hawaii. Garry gave nothing less than 100% throughout the tour and is highly recommended - his knowledge of endemic species, including recognition of species calls was invaluable. Recordings of the endemics calls can be heard here on the HFT website.
Departing Waikoloa we headed east to the saddle road, quickly picking up two short-eared owl (pueo, see previous post), Eurasian skylark, ring-necked pheasant (including green form versicolor), erckel's francolin, wild turkey and house finch. The scenery was nothing less than spectacular, with the snow capped peak of Mauna Kea dominating on the Saddle Road and incredible lava formations aplenty.
Later we joined the unpaved Keanakolu Road for 11 miles to the Pua Akala tract of the private refuge. Along this road (drivable only by 4 wheel vehicle, access by permit only) we picked up two Hawaiian hawk ('io), one pale phase, one dark phase, and three kalij pheasant. Erckel's francolin and Eurasian skylark were common, but we failed to locate any koloa (Hawaiian duck) on the ponds.
Our arrival at the forest was greeted with an nene (Hawaiian goose) in the grassy car parking area - closer inspection revealed a sitting female, nesting under an old unused vehicle! Up to four birds were present in the area, with all adults ringed by the refuge.
Heading into the forest native species soon appeared, with the delightfully scarlet i'iwi (with it's rusty hinge-like call) and crimson 'apapane being most abundant. Quickly the weather turned and it remained wet throughout the visit - clearly photography was going to be difficult, and pictures in this post are nothing more than record shots, with the 100mm-400mm lens only used.
Descending further into the forest we were treated to good views of Hawaiian 'elepaio - a small and active flycatcher with a distinctive cocked up tail. Soon we heard our first of several olive green plumaged Hawaiian creeper (the only endemic not to have a local Hawaiian name), and soon we had good views of a bird creeping - just like nuthatch in the UK! At least four of the finch-like 'akepa were seen (two pairs, the males are a gorgeous peachy orange colour!) and vocal 'oma'o (Hawaiian thrush) were noted several times along with vibrant green Hawaii 'amakihi. Of all the target species only 'Akiapola'au was not seen (though it was heard on one occasion...) The walk back produced a few gaudy red-billed leiothrix and japanese white-eye.
All in all a super trip, highly recommended. Pictures in this post are as follows (top to bottom): 'Oma'o, male 'akepa, 'i'iwi, hawaii 'elepaio, nene.
Posted by John Malloy at 15:53

Wow, you did get to see quite a variety of birds. Wonderful pictures.

Wonderful birds at Hakalau - but the island as a whole id very vunerable from habitat loss - ferel pigs, cattle, introduced fauna and flora are having a terible effect on the native species.

Aloha Jon,
Thanks for joining us on Hakalau, and so happy to hear you enjoyed your trip.