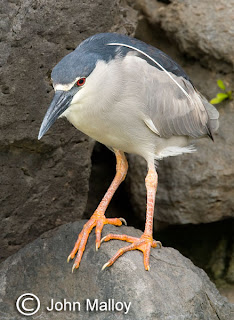 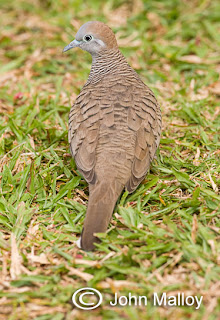 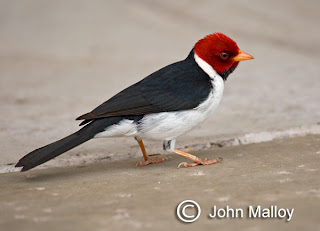 Here's a final selection of photographs from the Big Island.
Black-crowned night heron ('auku'u) is the only native heron in Hawaii and was abundant in the resort area. This particular bird was in very good plumage - I love the vibrant legs!
Green sea turtles were often found on the shore, especially during the afternoon - close inspection revealed scoured marks all over their heads - I assume this is from the largely volcanic rocks being sharp edged (the turtles seemed quite happy to doze on the rocks as well as the limited sandy beach).
Zebra dove, native to Asia, were introduced in 1922. This species, along with spotted dove, were commonly observed throughout our stay. Birds were often in small flocks and would readily associate with sparrows and finches feeding on the hotel lawns.
Yellow-billed cardinal was one of three cardinal species to be seen on the trip. This species is native to South America and was introduced to the Kona coast in 1973.
So that's all from the Big Island, a truly wonderful place.... time for an island hop en-route to San Francisco
Posted by John Malloy at 17:10