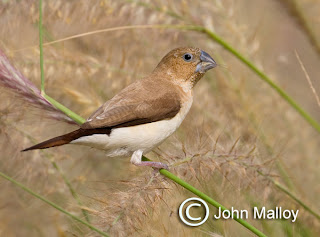 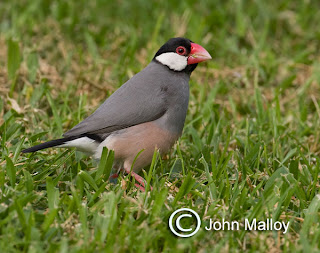 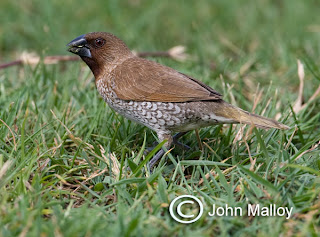 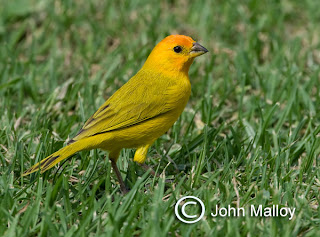 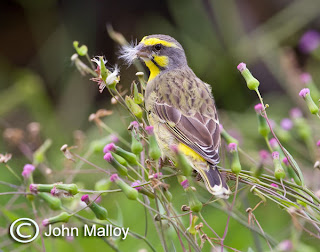 At last! Hawaii pictures... Let's start with some of the colourful introductions... it is an introductory post isn't it!?
We arrived on Hawaii late evening on Dec 31st - as we were disembarking the plane I received a text from my boss - holidaying in New Zealand - it had a great line (spellings per text message) "at an albatros colony lot of fuss for a big seagull". Class!!
So, back to the birds - first species on Jan 1st 2009 were common myna... nutmeg mannikin... spotted dove... house sparrow... zebra dove & pacific golden plover. This was certainly going to be a cosmopolitan week! Birds featured in this blog post are as follows (all photographed in the hotel grounds):
African silverbill - formerly considered a subspecies of warbling silverbill, the exact date of introduction is unknown, probably in the early 1970's. Regarded as common on Hawaii, this species is, surprisingly, from Africa...
Java sparrow - A native of Indonesia, locally common on Hawaii, introduced in 1867 and re-introduced in 1967 (must like them here, eh?). Certainly common in the resort with flocks feeding on lawns adjacent the hotel rooms. Massive beak!
Nutmeg mannikin - Introduced from south-east Asia in about 1865, widespread on all Hawaii. On the resort this species would often associate with house sparrow, java sparrow and saffron finch.
Saffron finch - these belters were a delight! Surprisingly easy to overlook when out walking, birds would often allow close approach - until a camera was pointed at them! This species is regarded as common on the Kona coast, a native of South America introduced in the 1960's. Lisa ("Birding reluctantly most-times") liked these alot!
Yellow-fronted canary - also regarded as common on the Kona coast (though not particularly on our resort), this attractive species is native to Africa and was introduced in the late 1960's.
All introduction species data extracted from "Hawaii's Birds" published by the Hawaii Audubon Society. A recommended purchase if you're heading out to Hawaii.
Plenty more images to follow - I'll try and put a few native / naturally occurring species on the blog soon!
Posted by John Malloy at 13:19

lovely pictures. Some really colorful birds there, unlike the UK.

Cheers Tom - there is certainly a colurful mix!

I like the text message from your boss, lol. What colorful birds you've seen. Looking forward to the next batch.

Hi John, glad to see you back. When I were a lad ( no its not a Hovis ad) those YF Canaries were Green singing Finches and could be bought locally....along with the Mannakins and Java Spugs too. Are you sure you have been to Hawaii and not just camping behing Heighley Gate Garden Centre? :)