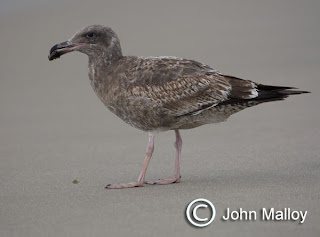 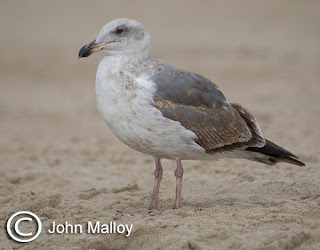 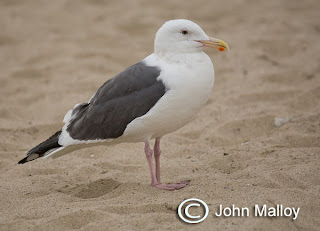 A gull this time! Western gull is a very stocky bird with quite a heavy bill (I reckon it could do some damage...) - it was probably the most encountered gull species on the trip, both at Santa Monica and San Francisco. Whilest staying in Los Angeles I would often seen small groups of this gull heading back to the coast as dusk approached.
Given it's abundance I was able to get a nice selection of images including several age groups - presented here are a juvenile/1st winter, 2nd winter and adult. Interestingly this species has plumage variation between northern and southern birds, with the latter having a darker toned mantle. Given the tone of the adult in the image above I'm guessing that this particular bird was "southern".
Posted by John Malloy at 12:18