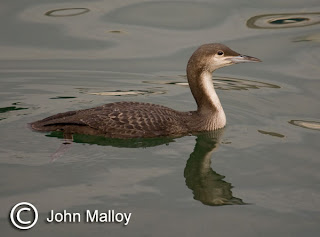 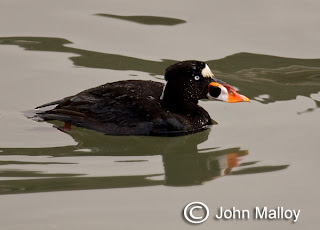 A walk along the San Francisco harbour front area to Crissy Fields produced some very close viewing of pacific birdlife - including these two fellas' here.
I was lucky enough to see the first UK pacific diver on an old quarry in Yorkshire a few years ago - unfortunately I saw it within a couple of hours of the news being released, so viewing was from a distant roadside prior to the landowners giving permission to view (for a ten quid parking fee) from the waters edge. My twitch companion Mark was boozing abroad at the time, so when he arrived back the following weekend I was able to head back down the road again for another go... annoyingly we had just passed Darlington when the pager informed of the diver flying off high!! So that was the end of that... In San Francisco there were several birds off-shore, the bird photographed here was one of two feeding among the moorings of yachts. Great views and a fantastic opportunity to see the chin-strap up close.
The surf scoter was also feeding among the moorings, I just love the orange on the multi-coloured bill and the piercing eye!
Posted by John Malloy at 16:42