Whats black and yellow and has a broad bill? 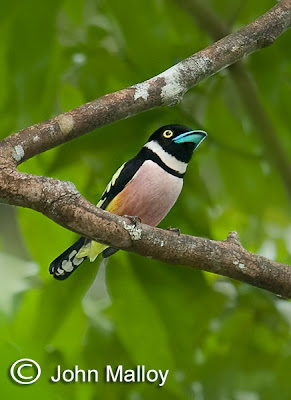 Depression has set in - holidays are over and work recommences this afternoon. Boo.

To keep my spirits up a little I've started the trawl through the holiday images - not too many great shots (most species on the trip were tricky to photograph) but a lot of reasonable record images were obtained.
First up on the blog is a (in my opinion) stunning species - black-and-yellow broadbill, a great advert for Asian birding, unlike any species I've seen before. How crazy is this bird - looks almost like a cartoon character!
This male bird was photographed in the afternoon session with Yotin Meekaeo at Khoa Nor Chu Chi, one of two broadbill species seen (more on the other in a later post).
The use of fill flash was an incredible asset to the trip and will certainly be a route that I'll take for future photography. Sincere thanks go to Colin Bradshaw for the loan of his 580 speedlite unit.
The bird was picked up on call and was one of three birds seen in the vicinity. Other birds seen from this particular location included black-naped monarch, black-bellied malhoka, ochraceous and red-eyed bulbul.
I've also changed the header image for the blog - could not resist the temptation to use one of the gurney's pitta images.... more will follow for sure, including more of the male and some of the female.
Posted by John Malloy at 10:49

My guess was Broad-billed Honeybee, I guess I was wrong.