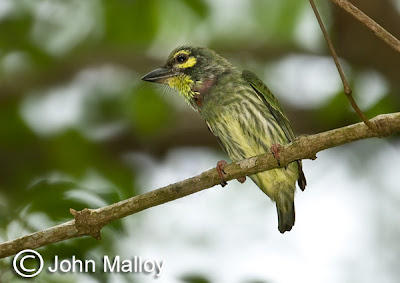 I had been in the resort for a couple of days before I finally saw the bird that was making a curious and monotonous deep airy sounding "tonk tonk tonk... you get the idea, it goes on for a bit! ... tonk tonk etc" - coppersmith barbet.
Two birds were initially observed, both appeared to be immature - this bird is just starting to get some red feathers under its throat. Short tailed, almost appearing top-heavy, this birds were real crackers.
...Meanwhile, back here in the north-east of England,weather conditions are looking good for this weekend, with Holy Island already holding bluethroat and icterine warbler... I bet there are a few other goodies lurking too... just need this rain to stop!
Posted by John Malloy at 14:25