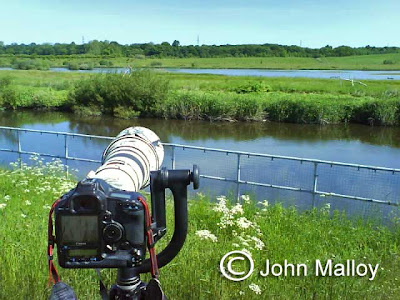 A sunny Sunday morning and positive news on the collared pratincole was still at Swillington Ings saw Mark and I head south for the short drive to West Yorkshire.
We arrived just before 10:00 - and were greeted with the news that the pratincole had flown west not more than 30 minutes earlier - "don't worry it will be back!" was the enthusiastic re-assurance from the birders already present... did it return? No!
Great. :(
Compensation was not too bad at all... 3 whiskered tern had arrived a little bit earlier! It's been anexcellent spring for this species in the Uk, so it was good to catch up with some of this rare visitor. Two were on show immediately upon our arrival and soon after the third re-appeared, perched on a post in the middle of the water. 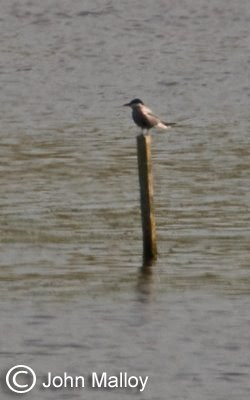 It had been a few years since our last encounter with this marsh tern, and to have three together was a treat. Photographically they were a nightmare - Swillington Ings is on the north side of a canal, viewing is on the south side, so views were distant to say the least. During the two hours of our visit we had one brief close-ish fly-by, but that was into the light, record shots only... 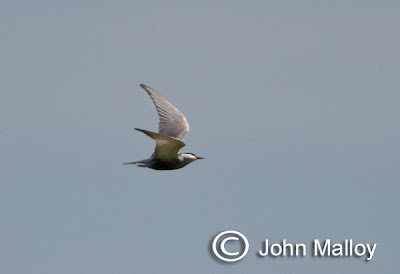 Other birds seen during the visit were also compensatory, and provided sufficient entertainment during the ill-fated twitch. Kingfisher jetted up and down stream, with a couple of reed warbler singing, 1 female type marsh harrier moved through and a drake ruddy duck* was on the "Ing".
(*Don't tell DEFRA)
Posted by John Malloy at 15:35