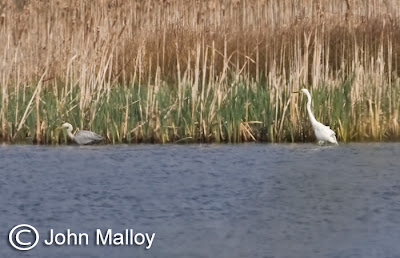 Birding is a funny pastime.

I had spent a very enjoyable hour or so chatting to LMcD with Mark at Arcot Pond this morning. We had all been there hoping to catch up with an elusive drake garganey that had been reported a couple of times during the week.
As LMcD was leaving he advised us that the garganey would probably now show. (so we urged him to leave!)
Literally one minute later, while setting up the camera to try and photograph a vocal grasshopper warbler, I turned to face the pond. To my great surprise I was greeted by the sight of something that had not been there a few seconds earlier. Large skinny white bird on the north shore?...Great white egret?... GREAT WHITE EGRET... eh?!, GREAT WHITE EGRET!!!! (expletives omitted!)
Mark and I were elated to say the least... but where was LMcD??? Mark made a a quick run to the road, where luckily LMcD was found, tracking a common whitethroat we had seen earlier. Regretfully, the grey heron on the pool took great dislike to the egret,and after no more than nine minutes of chasing the egret around the north-east corner of the pool, the GWE to off and quickly gained height to head north. And that was it - gone... right place, right time. (The GWE was present from 09.51 - 10.00).
Dreams of getting closer for a photograph that was any better than the record shot presented here (500mm, huge crop) will have to remain exactly that. No loss, it was a fantastic bird for the home turf.
An amazing bird for Arcot and only the 9th for Northumberland, with the last record in 2003.
Posted by John Malloy at 19:56

Good effort, but I think you owe a few county birders petrol money as they scoured any patch of water they could think of today :)

Its a funny old game ain't it?

Great find, I found the fifth or sixth a few years abck and taht was very mobile too taking in Castle Island, Longhirst, Bothal etc in one morning. Good practice for Thailand?

Thanks chaps. NS sums it up precisley