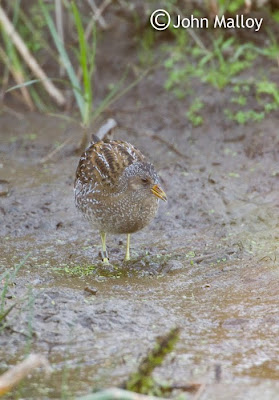 Started the birding day at Shibton Pond in Gateshead -  arrived not long after 08:00 to a full hide and plenty of birds to look at.

The spotted crake was feeding on the far shore - my second at the site - the last one I saw here was in 1989. For convenient comparison three water rail were also out feeding - they highlight that spotted crake are really very small, with the crake dwarfed!

Fellow north-east bloggers need not worry about missed crake photo opportunities at Shibton either - the image posted here is for illustration purposes only - this fine and ringed fellow was photographed at Marazion Marsh (Cornwall) in October 2007.

Two little egret remain at the pond and I note that another was noted on the River Tyne a little later after we had left. 1 greenshank was also noted.

We met John B and James at Saltholme just after nine, and it wasn't long before we were watching the immature whiskered tern (now approaching a months residence). A tick for Phil, albeit distant in the middle of the west pool. Frustratingly that's where it remained throughout our two watches from the roadside, even when fly-catching it remained faithful to the central part of the pool - never in contention for a photograph.

So no images from today but a nice few hours out catching up with the lads, with a few decent birds to boot.

Highlight for all was the "9 item" breakfast at the visitor centre...
Posted by John Malloy at 16:35

Good day on Saturday, pity there were no photos that you were happy with! Hope to catch up with the crake tomorrow and fingers crossed for the semi-palmated and sharp-tailed around the Humber if they stick around long enough.