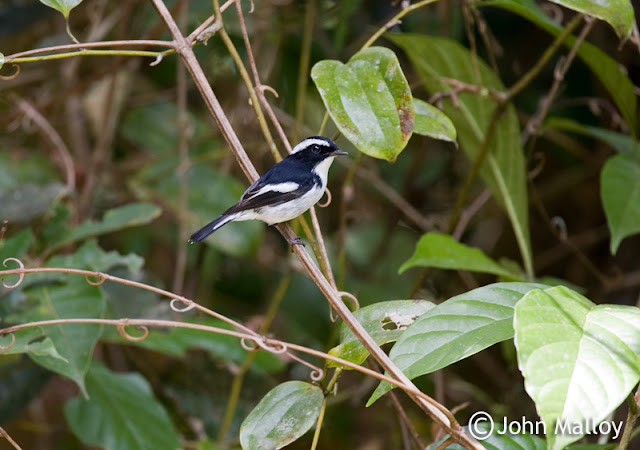 Our decent of Gunung Brinchang took several hours and the walk back to the hotel was nigh on ten miles. I guess it would have been quicker for a non-birder ~ Mrs Birdingsometimes is very patient.
The final species noted from the upper slopes was little pied fycatcher - we encountered a dapper pair in a gully. The male is strikingly plumaged (like all back and white flycatchers), while the female (below) is a surprisingly grey-blue, a feature of the westermanni sub-species found in Malaysia/South Thailand 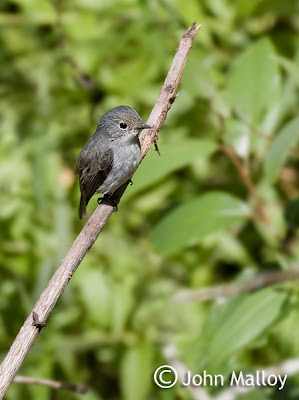 As we left the moss forest and jungle we entered tea plantation territory - fascinating landscape and a lovely aroma of fresh tea! I know a certain North East birder who would like that - a lot...! 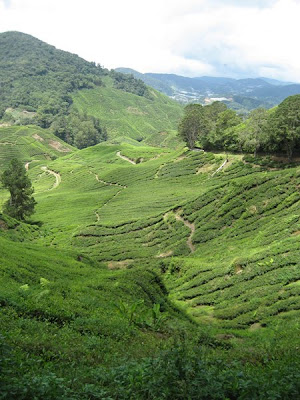 Hard labour working the steep slopes of the tea plantation - I guess it keeps you fit. 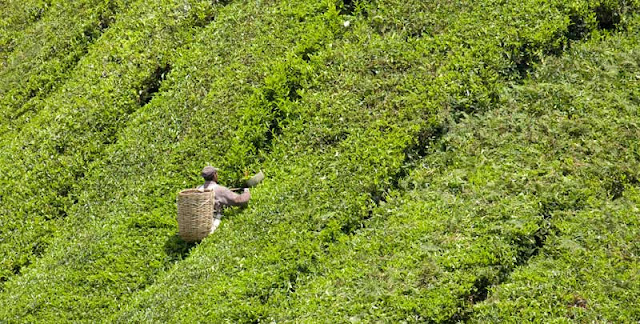 In the tea plantation area we added a few more species - glossy swiftlet darted along the ridges, paddyfield pipit worked the tracks between the tea plants and fire-breasted flowerpecker kept to the tree tops. Mountain bulbul continued to be numerous and we bumped into another flock of mountain fulvetta.

While trying to photograph more white-throated fantail a single drab female black-throated sunbird gave close views - how I wish this could have been a bright coloured male! Nonetheless, a good photo opportunity - unlike the fantails which simply teased. 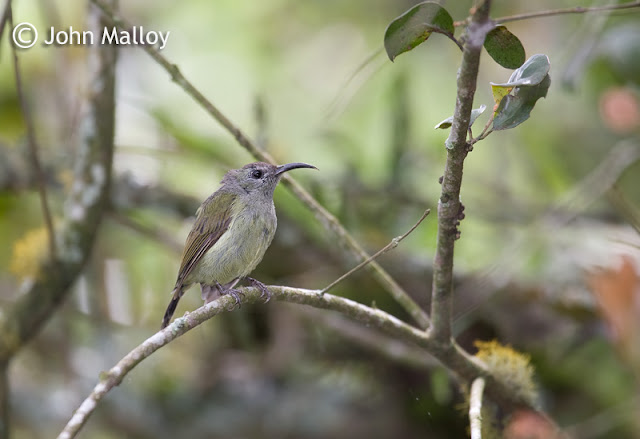 We arrived back at our hotel in the late afternoon, picking up some boiled sweetcorn cobs and fresh strawberries from hawker stands in one of the villages. Tired but satisfied.
A very high flying flock of presumed mountain imperial pigeons flew over and we picked up large billed spiderhunter during the last few hundred meters.
We had one more day in the Highlands - this was spent on track 4, as previously posted. No photographs that day... not quick enough for the slaty-backed forktail and the blue nuthatches were seen on a shopping trip to collect provisions before our final destination: Pangkor Laut - a small island to the west of Lumat / Pangkor Island - few species but better images to follow.
Posted by John Malloy at 18:06