Overtime on Friday night resulted in my weekend starting at 06:00 on Saturday morning. The drive home in the dark was lightened somewhat by a barn owl near the Seaton Burn roundabout - perched on top of a road sign.

After some catch-up sleep and bad bass playing I headed to West Hartford at dusk - owl activity was not as good as late, and it took till almost dark for a single barn owl to be picked up on the far fence line.

Sunday was a lethargic day - a mixed-up body clock got me out of bed for 04:45... so all the ironing was done by 07:00. After a bit of exercise in the morning (with approx 10 waxwings en-route)  I headed north to Alnwick to try and see the obliging great-white egret that had been frequenting the river below the castle.

There had already been negative news late morning, so it was with no real great surprise that the trip was unsuccessful - I should have been there earlier -  see the great account and pictures on Stewarts blog. A single grey heron was as close as it got, but the view of the castle was worth the trip, along with a good chat with Richard and John.

The journey home was just ahead of the blackening clouds, so with haste I took another quick look at the squacco heron in Morpeth. What a fantastic bird this is - and it is still drawing an admirer or two... even a couple of old stinking drunks stopped to have a look between pubs!

Took a few images, none of which really did the job ~ with an ISO rating of 800 I was shooting with an exposure of 1/40th... it was rather dark! I like the colours on the one below; 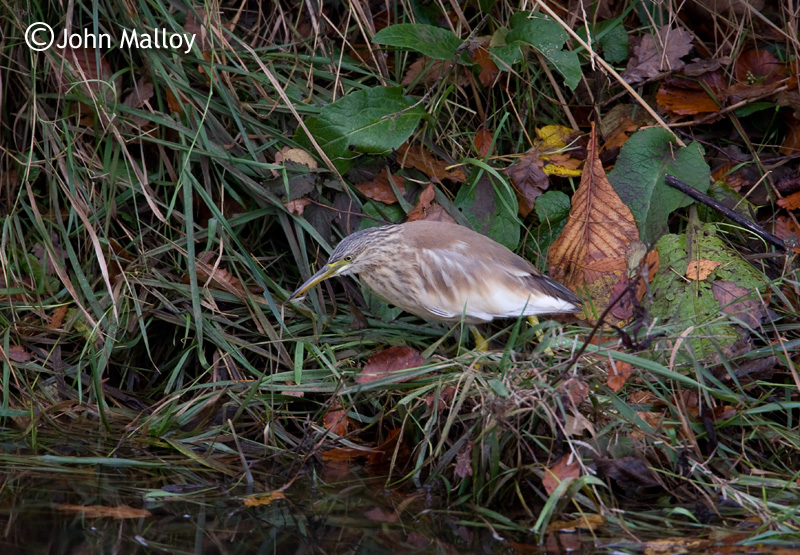 West Hartford was a convenient stop-off at dusk. A single barn owl perched on the fence line near the farm was picked up immediately, while the only other birds around were one kestrel and a carrion crow!


***
On a literary note I've started reading the very excellent book by Chris Gooddie ~ "The Jewel Hunter": a quest to see all of the worlds pitta species in a single year (and I was pleased with three in a morning last year!). Three chapters in and I'm hooked!
Posted by John Malloy at 18:57