Spent an enjoyable day out with Phil of Crammy Birder fame in Lincolnshires' Frampton Marsh. Predictably this visit was a twitch for the oriental pratincole. It was positive news on the pager early morning, so our journey down was quite relaxed. Arriving at the reserve just after 10.00, we were watching this delightful pratincole soon after, as it hawked for insects over the fields.

Our initial viewpoint was from a track just beyond the 360 hide, and viewing proved to be distant. So we walked on, and what a good vantage point the east hide prove to be, as the pratincole hawked very close indeed! 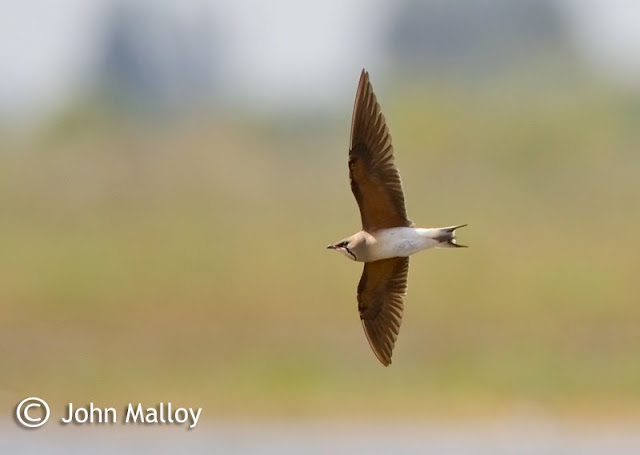 Above - Oriental Pratincole, Frampton Marsh RSPB. Click the image for a sharper version
There were lots of "oohs" and "aahs" as this eastern mega swooped very close to the assembled mass! Occasionally the pratincole would land (weirdly always in the same spot as it had left) and many digi-scopers are sure to have got some very decent images. It was in flight when photography was more of a challenge as this bird could really shift as it hawked! I've a load of "blurredpratincoleinsky" shots, some of which don't even have the "blurredpratincolein"...!!! However, I had a lucky flypast where a sequence were nearly in focus and (more importantly for me) the light was suffice so that you could see the smart plumage and colouration of this bird without too much need for photoshop editing.
The oriental pratincole was a significant bird for me - it completes my UK set of pratincoles (those recorded so far anyway!) and it was my 400th UK tick. (!)
In addition to the pratincole there was some good birding to be had - wood sandpiper, little-ringed plover, garganey, corn bunting, little egret, three 1s little gull, dark-bellied brent geese were all nice padders, while we missed both temmink's stint and curlew sandpiper.
The journey back north was broken with a time-constrained visit to Potteric Carr. What a huge reserve! Arriving after 15.00, we had to be back to the car by 17.00 (note to self - don't park in the gated car park next time!). After paying for a permit Phil and I headed as quickly as we could to the St Catherine's field area of the reserve where we instantly could hear the very vocal iberian chiffchaff singing in trees on the M18 embankment. Cracking! Annoyingly we could not see the chiffie, though others could, albeit very briefly.
Time moved quickly and it was not long before we had to head back to the car - a shame for Phil - a tick so near but so far... There'll be others. And with that we headed back, arriving at 19.00, exactly 12 hours after we had started our day. Exhausted but well worth the effort!
Posted by John Malloy at 15:14