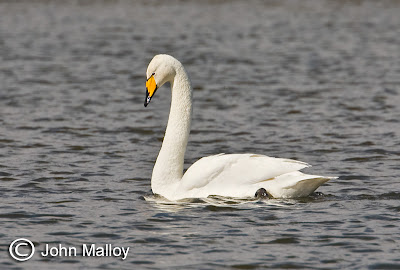 A change of shift pattern this week has seen me complete one nightshift on Monday then back on to days from Wednesday - so a nice bright sunny morning was as good an incentive to set the alarm clock early and make most of the day. I did not have to travel to far this morning - five whooper swan had dropped into Arcot Pond the previous evening - so the pond seemed as good a start as any.

Thankfully the whoopers' were still present - five in all, four adult one immature, loafing with two mute swan and a single canada goose. Pretty much annual on passage in Cramlington, birds used to be more regular when there was a small wintering flock (herd?) near Brenkley. I've even watched feeding birds in fields directly behind my parents house.
Also on the pond were two grey-lag geese, mallard, tufted duck, little grebe and gulls of the common, black-headed, herring and lesser-blacked backed variety. The scrub surrounding the water held reed bunting, yellowhammer, wren, a single chiffchaff and a heart-stopping pheasant that launched itself in the air just as I walked past - eek!
Another chiffie was heard on Crowhall Lane when heading back home for a spot of lunch.
Posted by John Malloy at 13:15

Any sign of the Sand Martin?
Were you on your bike today because I think I past you near Nelson Hill but I wasn't sure.

No sand martin - yet, numbers should pick up soon. Took the car this morning - camera gear is a bit much to carry!

Must be the same Whoopers that roosted on Bothal last thursday...4 adults and an immature. Stunning pics of the SEO.