White Stork (on the run) 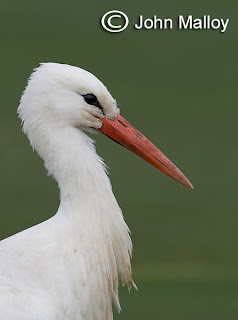 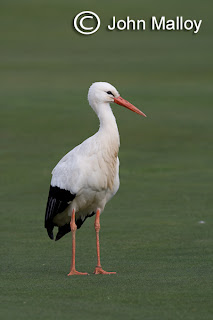 A report of white stork near Longhorsley got me out of the house this afternoon.
White stork is a tricky bird in the north-east, as many birds originate from captivity - especially Harewood House in Yorkshire. The Harewood birds are free flying and have a tendancy to wander in the Spring... Regretably this bird was ringed and will look very familiar to the followers of Boulmer Birder - last years captive ringed white stork that was on the airfield at Bockenfield - a location just east of todays sighting at Burgham Park Golf Course. Must like the area!
According to the very helpful staff at the course, the stork had arrived during the morning on one of the tees adjacent to the A1, and after an offering of bread from a club member (I kid you not!), spent some time on the club house roof.
The stork was still on the club house when I arrived, craning its neck over the roof apex to watch golfers coming and going from the building. Quite a sight!
After a bit of a preen the stork dropped down from the roof into the putting area in the middle of the club car park, much to the delight of the golfers, and me. Many pics were taken, but only a few permitted a "clean" back ground - many had bits of car park or putting flags in the back ground.
Posted by John Malloy at 18:15