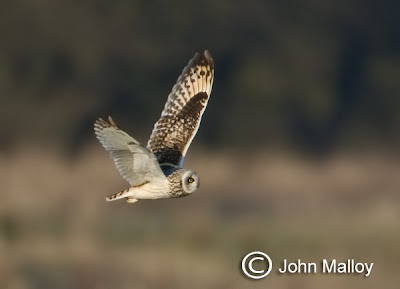 I had some time to kill between finishing work and heading into Newcastle to see The Enemy at Newcastles' O2 Academy on Thursday, so a quick jaunt round the local area was the perfect excuse to get out of the house (and avoid the dreaded first cut of the lawn).
Briardene car park was the first point of call - no immediate sign of the med gull, followed by a quick look at the wetland at St Mary's - few teal, snipe, mallard and a single mute swan and grey-lag goose were all that were on offer.
Killingworth Lakes' stray barnacle goose appears to have gone, while Arcot Pond held two pair of little grebe, moorhen, pochard, teal, mallard, goldeneye along with singing yellowhammer.
West Hartford, as usual (!) produced the goods in the form of two short-eared owl - remarkably the first birds seen at WH since November 2008. Both birds were hunting in fields to the south and west of the flash and received unwelcome attention from herring gull and carrion crow. STH was texted and duly arrived after the birds had gone to ground. Photographically the birds were tricky - strong late afternoon sunshine and amess up with the equipment in my camera bag - image presented in this post was using a 2.0 extender with the 500mm lens - I'd have preferred to have used the 1.4, which was on the hallway floor at home. Lesson learnt. :-(
Other WH highlights included four each of oystercatcher and shelduck (the latter species used to be quite erratic in Cramlington until recent summers), eight teal, three grey heron, snipe and kestrel. I'll need to don wellies if I'm to stand a chance of jack snipe. Good numbers of gulls were on the pool, consisting of black-headed, common, herring and lesser black backed. Two roe deer were also present, feeding in the reedy area to the south of the pool.
So, a good end to a relatively quick perusal of local sites.
Posted by John Malloy at 14:37