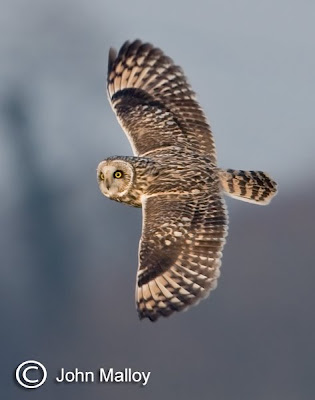 Friday afternoon was sunny and mild, in fact, too nice a day not to have another go at photographing the short-eared owls at West Hartford.

I arrived at 15.30 but had to wait just over an hour until the first SEO flew into the area to feed. The hour had passed quickly - at least nine oystercatcher were on the pool, teal numbers had increased to 30+ birds, pheasants were in display and an inquisitive stoat made several visits to the hedge next to where I was standing.
Eventually two birds were on view. Rarely interacting with each other, but often in the same view, photography was as always tricky. SEOs' are very well suited to overgrown fields, their plumage is very much matched. Their tendency to fly low over the ground does not help either, especially as my chosen watch point is somewhat "sunken" in the field.
A few photographs were taken, one of which is presented here. I'll sort the rest over the weekend and see if there are any keepers.
Not long before the sun was setting one of the SEOs' had a surprise attack - from a peregrine! Luckily there was no harm done... It's been a while since I've had peregrine at West Hartford, and in true form the sturdy raptor headed north to perch on the electricity pylons over the River Blyth. A good end to a pleasant afternoon!
Posted by John Malloy at 19:28

Cheers - I still havn't got that "dream pic" yet though!