With the snow level maintained by continued freezing conditions I opted to stay local when birding today - 4 wheels were replaced by two as I headed off on my bike. By the first corner of the journey I had almost slid over on the churned up snow on the housing estate - luckily, the main roads were clear, so it was not much later that I arrived at West Hartford.

Hopes were high for some day flying owls, but there was no sign... nor of much else really - 1 buzzard high over the River Blyth, a solitary kestrel and a few blackbird. One advantage (if there is one) was that the snow was so deep that I didn't need a bike stand: 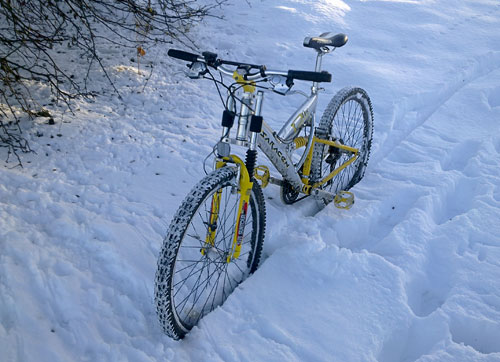 ﻿
As WH was quiet I headed east along the A192 to explore the Horton Burn. At the old fire station there was much activity, with a  several "firsts for the burn" -  a good count of 10 grey partridge and a single woodcock (feeding beneath a hawthorn on the burns bank), a single redshank, followed quickly by a lapwing - purple patch!!
The redshank ended up being the first of four - the hard weather has pushed them right in. Two kingfisher zipped up and down the burn, and snipe lifted at every bridge that I stopped on. Moorhen numbered 3, and only 1 pair of mallard were present.
A pair of bullfinch were at the west end of the burn and goldfinch were abundant, blackbird numbers were very impressive too.
Posted by John Malloy at 19:35