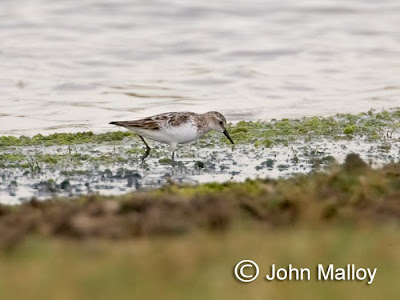 As Brian at Northumbrian Birding says in his blog, it is always nice to see a pager message for Northumberland, especially when the species name is in capital letters.

And so it was this morning, just as I was about to head out to do some non birdy things before work. A quick change of clothes and a gathering of camera gear and I was off - to Cresswell Pond for a semipalmated sandpiper.

The last message had suggested that the target was on the beach, so upon arrival I parked the car and the pond outlet with the intention of heading onto the beach - but a quick glance at the hide revealed that it was full - so the bird must be on the mud in front of the hide...

Got there to find that the only birder who was aware that semi-p had been reported was Blyth Birder - and there was no sign (although there was a moulting ad med gull). A glance to the north of the pool revealed a small gathering of birders - twitch on!

Sure enough, the semi-p had just returned to the north part of the pool with a small group of dunlin. Although viewing was good it was, in the time I had available, a bit too distant for anything more than a token record shot. Judging by some other images on the 'tinternet it was showing better early afternoon. A county tick for me. Smashing.

Very nice to see this bird well attended by the Northumberland birders - lots of chat ensued. Watched the bird for about an hour then had to head back (rather quickly) to get changed for work. No time for lunch!

Apparently this bird may have been present for it's third day - so hopefully I'll get another chance for better photographs later this week.

Other species largely ignored during the semi-p grilling included black tailed godwit, sanderling, dunlin, curlew, golden plover, redshank, ruff - and with the apprant clearing of the sandbank about to happen (or a stolen JCB digger on the beach?), water levels may be set to drop making the pool a wader mecca over the next few weeks...
Posted by John Malloy at 22:07