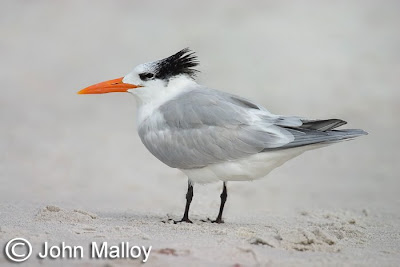 Following on from last months Florida selection, it was pleasing to recieve Birding World magazine today and find that one of my (american) royal tern images had been used for an article on the species after it's (well, "african", form) occurance in Ireland and Wales during June 2009. Taken in January 2007, this tern species was very approachable on the Gulf coast beaches, often associating with groups of black skimmer, forsters tern, ring-billed gull and laughing gull.
Posted by John Malloy at 15:54