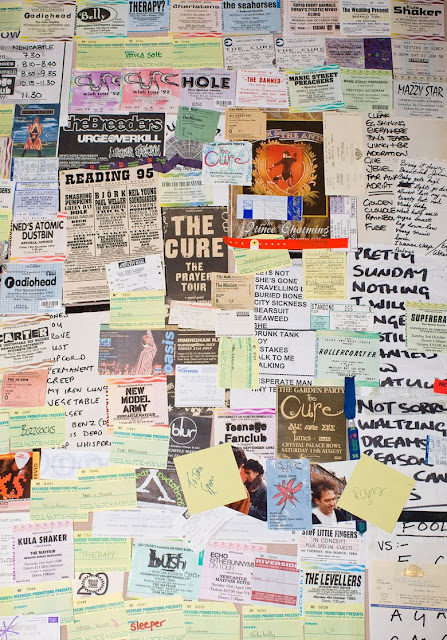 Finally got round to putting some suitcases back into the loft this afternoon, an exercise I’d been inadvertently putting off for a few weeks. An unexpected bonus was finding a file full of old music memorabilia – including a wad of old concert tickets. That was the end of my afternoon plans for a visit to West Hartford, as I ploughed through the stubs reminiscing! Sharp eyed readers may note the Adam & the Ants programme – this was my first concert in January 1982, going with my Dad and cousin Rob ~ a brilliant, theatrical show!

Rob and I hit the Newcastle City Hall for our first “unaccompanied” concert: The Alarm, and that was the start of many others thereafter… including trips away with Selbys Travel for shows in Birmingham, London and Edinburgh, festivals etc.

I like that the former ace Newcastle venue “The Riverside” used to do hand-written tickets – not something that would be done today with all the ticket scams! Note the David Bowie ticket from there? He did a “club tour” in 1992, amazing!

Amongst the tickets are a few bits from the concert stage – setlists from Radiohead, Tindersticks (you’ll all have their records eh?!), The Cranberries, Cranes, plus chord reminders for Julianne Regan (All About Eve) and autographs of Robert and Simon from The Cure when they played a show at Newcastle Mayfair in 1992…

Click the photo for a larger, clearer view & see how limited my music tastes were / are!
Posted by John Malloy at 18:46