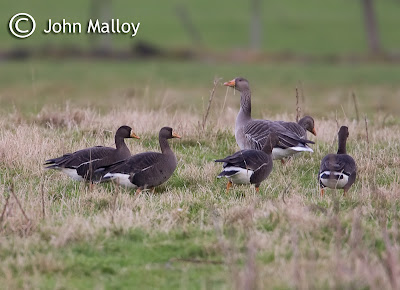 Saturday morning dawned reasonably bright, so Mark and I headed up the coast for a casual potter.

First stop was Newbiggin, where four adult and one 2nd Winter Mediterranean gull were readily available. It was cold and cloudy, so I did not venture onto the beach for any photographs - I'll save that for when the adults are developing their black hoods.


At Woodhorn Flash the goose flock was smaller and distinctly white-frontedless, we later found a larger and Greenland white-fronted inclusive flock (the four birds that have been present a week or so now) just north of Woodhorn Church.

Note in the photograph how much smaller than grey-lag geese the white-fronts are, along with the overall darker plumage, orangey bill and thin white trailing edge to the tail. These first winter birds don’t have much in terms of barring on the belly yet and the "white-front" is restricted. Click the image for a bigger and sharper version!

Druridge held three then four smew, including the 1st winter drake – I think this may be the first I’ve seen in this plumage. All four smew kept to the nothern side of the pool, which is a pity. The pools also held wigeon, mallard, teal, goldenye, red-breasted merganser, while overhead the predominantly pink-footed geese flock passed over a couple of times. It transpired later that the tundra bean geese (3) were also in the area today, so it’s feasible that we could have seen these had we looked!

At Blyth we had no luck with the droopy winged 2nd winter Iceland gull, it was reported later in the afternoon, so I’ll try again some other time.

And that was that, bacon and eggs were calling at Birdingsometimes HQ.

Nice to see Northumberland waxwing reports increasing and taiga & tundra bean geese reported in unusually high numbers today. This is proving to be an interesting time…
Posted by John Malloy at 19:57

Thanks, they're not the easist to get close too!