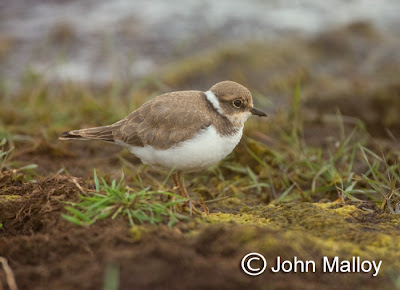 I spent an enjoyable hour at West Hartford this afternoon.

The photograph featured here is of an immature little-ringed plover taken at the Beehive Flash in July 2005, taken from the car - the West hartford bird is not so approachable!

The only other wader species today was lapwing, of which only two were present.

On the pool edge and surrounding fence posts five whinchat reappeared after a day missing (I had been at West Hartford on the 31st August too - there was so little to report on the blog that I didn't) with two stonechat. Stock dove continue to show while numbers of barn swallow and house martin are suddenly declining.
Posted by John Malloy at 17:39