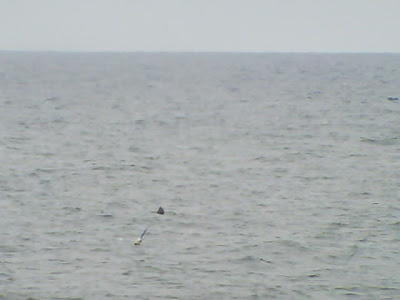 With the news of a cory's shearwater heading north from Hartlepool late morning, I opted to spend some time sea-watching this afternoon.

The obvious choice for me would normally be St Mary's... but for some reason I elected to head a bit further north, past Newbiggin and start watching from Snab Point.

The location was actually not too bad - I was able to view from a height of about ten meters above the beach (which is higher than the likes of St Mary's etc), but the coast here is recessed a bit, so birds passing Newbiggin are likely to drift out to sea a bit, venturing closer to land at Hauxley.

So, for the next four and a half hours I scoped the sea and enjoyed a reasonably steady trickle of seabirds - the totals being something like:

Hopes had been high when the cory's shearwater was reported at both Whitburn and St Mary's (along with great shearwater at Whitburn)... but alas, no joy today.