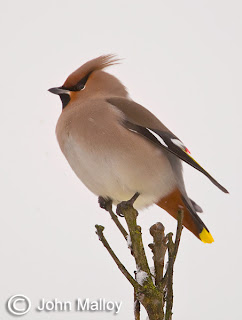 I arrived home from work after a slow journey in heavy snow. My mood was lightened somewhat when I stepped out of the car to hear the familiar trilling of (bohemian)waxwing. It's been a good winter for this species, with large flocks in most areas of the UK. Northumberland has fared less well than usual, including the Horton Burn area of Cramlington, where this species has been regular over the last few years.

As it turned out there were 26 of the pretty things perched in a tree behind my cul-de-sac, so in a moment of (madness?) eagerness, I kicked off my work shoes, donned boots and water-proof trousers and headed straight out into the increasingly heavy snowfall to try and get some photographs. It would be really easy...
I learnt a couple of important points during the following half hour or so.... remember to take gloves when it's snowing - it was absolutely freezing - I managed to loose all feeling in my hands, which didn't help when the flock landed in a small tree next to where I was standing, I could barely press the camera shutter!
Secondly, wait for the blizzard to pass - ! - Snow on camera equipment isn't that good, particularly when it melts on the view finder, and of all the images taken only two photographs didn't have snow in front of the waxwings' face! And the heavy snowfall meant that they sky was dull; waxwing tend to look very grey in dull conditions.
To compound matters, I then wasted a lot of time trying to salvage some images on the PC (with the waxwing flock flying past the house window on a couple of occasions to rub salt in my wounds), the best of a very bad bunch is featured here.
I shouldn't complain really - waxwings a smashing birds, I just selfishly hope that the flock will stick for a few days to enable a second chance in better light. Here's hoping...
Posted by John Malloy at 16:32

Waxwings are great at the best of times, cracking when they're over your own back garden though.