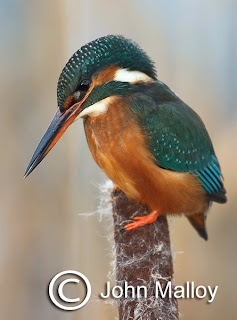 With a week of nightshift complete and the car stuck in the garage for a service a plod around some of the patch was called for. Starting off in the Bassington Industrial Estate little was seen until I arrived at the old road at Crow Hall Lane, rapidly becoming encroached with bramble and suchlike - first up was Bullfinch, followed by a (more pleasing in this neck of the woods) treecreeper.
Further north at the entrance to West Hartford 6 lesser redpoll were a nice supprise with 3 more bullfinch and a healthy (50ish) mixed flock of fieldfare, redwing, blackbird and lone mistle thrush patrolling the hawthorn hedge leading up to the pool. I didn't flush any snipe sp. in the recently cleared grass area to the west of the road (a new fire station is planned for development in 2009), nor was there any evidence of SEO, so I made tracks to the Horton Burn - tributary to the River Blyth, that convenientley cuts through a housing estate. As with most recent winters, the onset of cold snowy weather has pushed a kingfisher in view of the houses - always nice!
1 bird was seen today, perched near the road bridge at the "existing fire station end" Up to 2 birds have been present in the past, so there is time yet for another. (The photographs in this post were not taken today, they are of a very showy individual that was at Big Waters in 2006 - post would be a bit bland without some images!) 1 grey wagtail was in the vicinity and later in the afternoon a single grey heron was feeding upstream.
Posted by John Malloy at 19:07