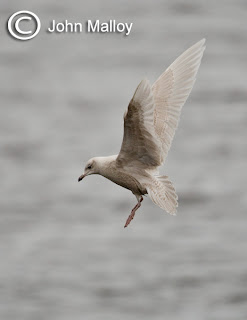 Headed to North Shields Fish Quay this morning, a trip that started well with ten waxwing at Blyth - feeding on bushes just east of the railway crossing. Pulled the car over and got the camera out... and they'd gone!

My arrival at NSFQ was rewarded with the immature iceland gull flying straight past the car - great!
I spent the next hour or so watching and photographing this delightful gull, with a short break to enjoy some chips courtesy of Mark. At 13:10 it was time to leave, but not until I blasted out a few shots of the gull which had decided to feed on the water opposite where we were standing!
Posted by John Malloy at 15:00