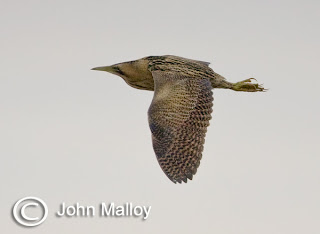 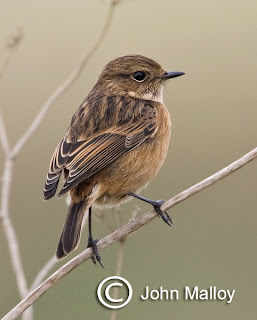 Spent a couple of hours in the Cresswell area on this dull and cloudy afternoon. The drive from home to the pond was good - I managed to bump into the snow goose (not literally) just north of Linton - now associating with a couple of thousand pink-footed geese. A bit too distant for photographs, so I headed on.
At Cresswell it didn't take too long for a bittern to show, albeit briefly, in the north reeds. Frustrated at last weeks efforts I decided to walk along the road and chance a flight shot. The stonechat above was photographed by the pond outlet. A little over an hour later the bittern did fly - but frustratingly for me, across the pool to the reeds to the west of the hide. Further to the frustration, I could not get the camera to lock focus on the bird... many expletives followed! Meanwhile the pink-footed geese flew over - a great spectacle, enhanced by the presence of the snow goose - picked out as they landed in fields west of Bells' Pond.
Thinking it was all over, I headed back the car. A chance look up and across the pool found me scrambling to put the tripod down and get the camera switched on - the bittern had took flight again... and was heading straight for me! Indeed, the bittern flew straight past and dumped itself into the reeds to the east of the hide. Great viewing despite the very poor light.
Posted by John Malloy at 19:16