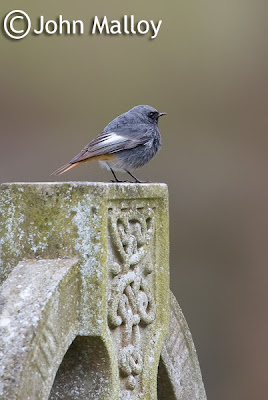 Had a late start today, after a tiring earlyshift. Took the easy option and headed to the coast to take a look at the two reported black redstart at Whitley Bay Cemetary. I had no issues picking them up, with a female appearing first on top of a grave stone in the south-east corner, quickley replaced by a spanking male! Camera assembled I rattled off one test shot to check exposure etc, looked ok but not the best angle... so waited for the  bird to turn around. Instead he flew west into the graveyard. And that was it!
Not a sniff of either again!! So the onlt shot taken is the one here in this post - so near but so far!
I took a few wanders around the graveyard to no further avail, and as 17:45 passed my mobile rang. A certain large raptor that had disappeared earlier  had been picked up again on the east of Prestwick Carr... White-tailed eagle... it was time to leave!
Twenty minutes later or so I pulled up to the east of the Carr to find a few happy and a few sad birders - the bird had drifted north. Turn-around time! As I passed the few remaining news broke that it was passing Bellasis Bridge... so that's where I headed and found that the road had been closed for flooding just short of the bridge. More annoyingly, the WTE had been seen to drift north at 18:15, presumably off for good.
There was some good banter with the lads, and the sucessful few headed off not long later. At 18:40 a large group of wood pigeon lifted to the north-west (see google map streetview below) and in the middle ... a huge thick-winged raptor drifting south west. !!!! This bird was massive! Granted it was a very poor view, but for the 30 seconds or so that it was showing it was surreal!
I guess there is a real chance that this bird will be around again tomorrow... 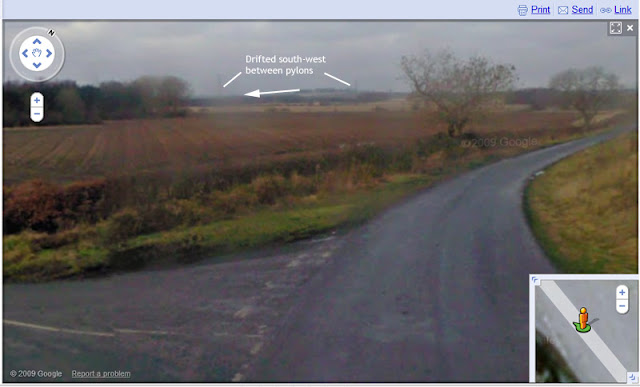 ahh, must of just dipped it, will have a look in the morning. That Black Redstart is a stunner.